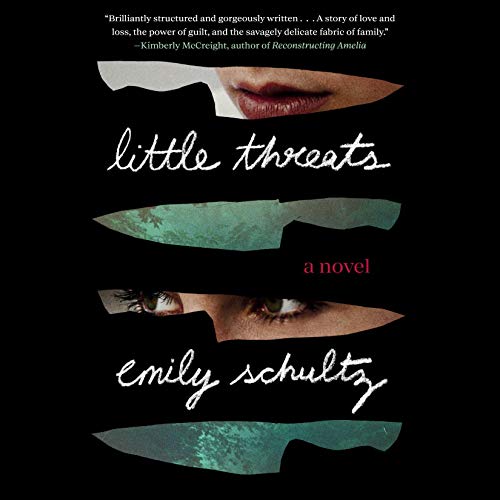 By: Emily Schultz
Narrated by: Dylan Moore,Ariadne Meyers
Try for £0.00

Both a taut whodunit and a haunting snapshot of the effects of a violent crime, Little Threats tells the story of a woman who served 15 years in prison for murder...and now it's time to find out if she's guilty.

In the summer of 1993, twin sisters Kennedy and Carter Wynn are embracing the grunge era and testing every limit in their privileged Richmond suburb. But Kennedy's teenage rebellion goes too far when, after a night of partying in the woods, her best friend, Haley, is murdered, and suspicion quickly falls upon Kennedy. She can't remember anything about the night in question, and this, along with the damning testimony from a college boy who both Kennedy and Haley loved, is enough to force Kennedy to enter a guilty plea.

In 2008, Kennedy is released into a world that has moved on without her. Carter has grown distant as she questions Kennedy's innocence and begins a relationship with someone who could drive the sisters apart forever. The twins' father, Gerry, is eager to protect the family's secrets and fragile bonds. But Kennedy's return brings the tragedy back to the surface, along with a whole new wave of media. When a crime show host comes to town asking questions, believing the murder wasn't as simple as it seemed, murky memories of Haley's death come to light. As new suspects emerge and the suburban woods finally give up their secrets, two families may be destroyed again.

"Fans of Tana French, Kimberly Belle, and Orange is the New Black will fall under this book's spell.... Terse and tense, Little Threats investigates righteous anger, teenage angst, and the enormity of setting the record straight." (Booklist)

What listeners say about Little Threats

Okay so first off, way too many characters. Second way too little suspects to not have an idea of whodunnit.Third there weren’t any crazy twists, it was just flat and boring. I held on until the end praying the end would bring this book some justice but again, nothing. I’m glad it’s over.