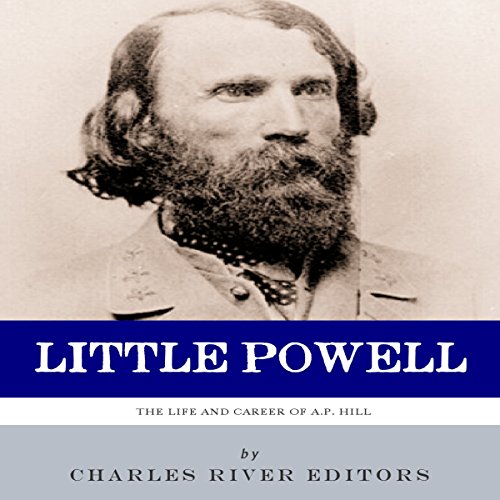 Little Powell: The Life and Career of A.P. Hill

By: Charles River Editors
Narrated by: Maxwell Zener
Try for £0.00

Of all the eccentric and enigmatic men who led during the Civil War, perhaps none had as mixed a record as Confederate Lieutenant General Ambrose Powell Hill, better known as A.P. Hill. Hill was a well known and highly respected general on both sides, particularly for his command of "Hill's Light Division" under Stonewall Jackson, which arrived just in time to save Lee's army during the Battle of Antietam. He continued to be Jackson's most capable subordinate until Jackson's death, when Lee gave him command of the III Corps of the Army of Northern Virginia just before the Pennsylvania campaign that climaxed at Gettysburg.

Known affectionately to his soldiers as Little Powell, Hill was considered courageous and courteous, a fitting representative of his native Virginia. But after the defeat at Gettysburg and in the wake of his death during the final week of the war, Hill's reputation was somewhat tarnished. Hill was frequently sick to the point of being unfit for command during crucial times like the final day of the Battle of Gettysburg, either because of nerves or the lingering effects of gonorrhea, which he contracted decades earlier around the time he became a West Point cadet in the fabled Class of 1846. He is perhaps best remembered for being engaged to Ellen B. Marcy, the future wife of Hill's West Point friend George B. McClellan, before her parents pressured her to break off the engagement.

Little Powell: The Life and Career of A.P. Hill profiles the famous general and examines his Civil War record, analyzing the legacy he's left behind.

What listeners say about Little Powell: The Life and Career of A.P. Hill