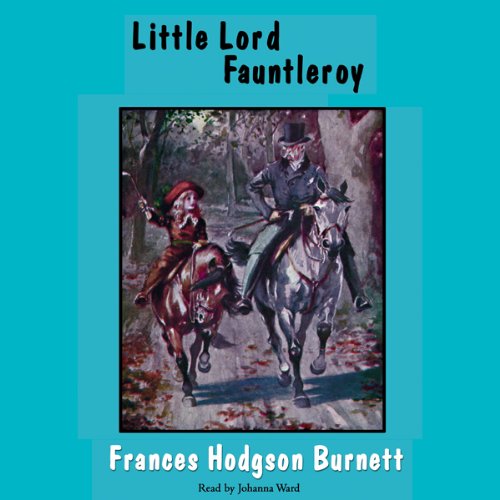 By: Frances Hodgson Burnett
Narrated by: Johanna Ward
Try for £0.00

"The best version of the Cinderella story in modern idiom that exists" is how Marghanita Laski describes Frances Hodgson Burnett's Little Lord Fauntleroy. It is the charming story of a seven-year-old American boy, Ceddie Errol, who lives on the edge of poverty in New York.

One day he is visited by a gruff lawyer at the tiny house he shares with his widowed mother, and his life is never to be the same: for waiting in England is Dorincourt Castle, where Ceddie is to reside as the sole living heir to the irascible, proud, and selfish Earl of Dorincourt. It will be up to this virtuous boy to capture and warm the Earl's heart and transform him into a doting grandfather and responsible landlord.

This story was very enjoyable in a quaint old fashioned way. Like most of Frances Hodgson Burnett's main child characters, this little boy was too good to be true - unrealistically angelic, unselfish and adorable, with far more bravery and philanthropy than one could hope for from even an 1800s 7 year old - but obviously the aim was to inspire young readers to become likewise, and that kind of made it more pleasant to listen to!
The story follows the fortunes of Cedric Errol, a Pollyanna/Heidi- like character who went from rags to riches, taming a grumpy old git along the way. The moral of the story is, of course, that a kind heart is worth more than any amount of money.
The narrator was very good, clear, well spoken and nicely paced. However, I have knocked off one star because the story required different accents (American, Irish and the servants) and this was not a success! Her lamentable attempt at an Irish accent was just laughably ridiculous, and her American accent was no better than midatlantic at best. She would have done better to stick to the nice cultured English speaking voice which was her real one. Also, she didn't have much vocal range; rough male voices, soft female voices, raging anger and the child's high piping voice could have been portrayed with rather more variation.
The story was so twee and heartwarming though, that this wasn't a deal breaker. Just right for a bit of easy listening before bed.

This is a story I remember from childhood and it was just as good as I remembered. The narration was excellent and kept me interested. It is definitely worth listening to if you want a simple story to listen to in the evening. The American accent wasn't bad and the characters were suitably brought to life. I will look for other audible books from the authors and from the narrator, Joanna Ward.

A sweet story of its time about circumstances very different from today, but with people with the same problems and challenges in life.

A Real Boy Becomes a Lord

This is a children's story that is a fun listen. My older children (teens) thought it a little predictable and too 'perfect', but that didn't stop them from listening to it when it was on in the room. We did enjoy it. It was neat to see how his Mother put her son's best interests ahead of her own. She was exemplary. So often we say what we think without restraint instead of choosing to do what is right. It is a bit of a morality tale, but there is enough of a good story to make it fun to listen to.

What other book might you compare Little Lord Fauntleroy to and why?

THis story reminds me a bit of Mark Twain's book, 'The Prince and the Pauper'. Both have boys who have to live real lives to learn how to be a good ruler.

I would listen to this again.

This is a story more out of time than a fairy tale. It is of goodness, honesty, caring and love. Wow, it is nearly fundamentally as hard to understand today as a greek tale.
Totally lovely!

This timeless story of Little Lord Fauntleroy is beautifully read by Johanna Ward. The story is written by Frances Hodgson Burnett who also authored the Little Princess and The Secret Garden. Just sweet, with a bit of adversity thrown in.

love the narrator, love the story but audio quality was poor compared to other audio books. Had to spend another credit and download different version.

A Master Treatise About the Power of Kind Hearts

Kindness, gentleness, humility, tolerance, respect, faithful loyalty, belief in the goodness of others are all powerful agents of "doing good" and for changing this world. This lovely piece of classic literature is as relevant and as powerful as when it was first gifted to the world, and so it shall ever be. Don't miss it, no matter your age nor place nor circumstances.

This is a phenomenal read and I love this story!!!! This is almost a carbon copy of the movie :)

great narration, loved the story of the ability of innocence to influence a hard heart

This story is uplifting, simple, & meaningful. My whole family enjoys listening to this book & we all feel inspired from the sweetness and innocence of the little lord. Just a great read to remind ourselves that we can better life for those around us with positive attitudes & kindness.

Another good book by Frances Hodgson Burnett. This is my second book of Frances and it's a wonderful childrens' book. Am sure it will please even grownups just like children. Characters development and portrayal was so very well done. Narration was beautiful both by the author and Johanna Ward for audible. Definitely enjoyable and worth listening to.

I have listened to many audiobooks (close to 90 at this point!) and this is one of the very top on my list. The writing is spectacular, such a great story. I can see why this book was one of the most popular children's stories of the 19th century (as popular as Harry Potter today!) Automatically will be a read for my children when they grow up and I already plan to listen to it again. The narration is also spectacular.