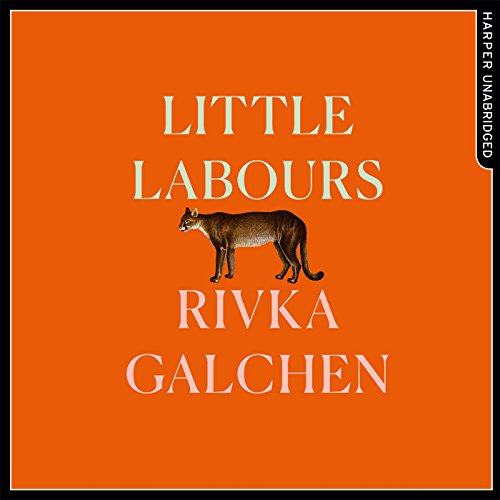 By: Rivka Galchen
Narrated by: Laurel Lefkow
Try for £0.00

A droll and dazzling compendium of observations, stories, lists and brief essays about babies.

One August day a baby was born, or, as it seemed to Rivka Galchen, a puma moved into her apartment. Her arrival felt supernatural; she seemed to come from another world. And suddenly the world seemed ludicrously, suspiciously, adverbially sodden with meaning.

But Galchen didn't want to write about the puma. She had never been interested in babies or in mothers before. Now everything seemed directly related to them, and she specifically wanted to write about other things because it might mean she was really, covertly, learning something about babies or about being near babies.

The result is Little Labours, a slanted, enchanted miscellany. Galchen writes about babies in art (with wrongly shaped heads) and babies in literature (rarer than dogs or abortions, often monstrous); about the effort of taking a passport photo for a baby not yet able to hold up her head and the frightening prevalence of orange as today's chic colour for baby gifts; about Frankenstein as a sort of baby and a baby as a sort of Godzilla. In doing so she opens up an odd and tender world of wonder.

"Galchen does something more profound than tackle motherhood; she utterly reinvents and reanimates the subject." (Interview Magazine)
"A book of extraordinary savour, with nearly every sentence calling for an emphatic underline.... A declaration of power in a culture where pregnant women and women with babies are cast under a cloak of invisibility until they normalize.... The sense upon finishing this tiny tome is that it is indeed very small, but not in the least bit minor." (The National Post)
"Galchen is, for my money, one of the most gifted stylists writing in American English today. Her funniness is otherworldly. Preternaturally deft, Galchen can do almost anything with next to nothing." (Los Angeles Review of Books)
"A highly original book of essays and observations.... I adore Galchen's quiet, and the bravery of this book's fragments.... Motherhood is an undiscovered country in the literary sense, one we must venture into lest our experience goes unrecorded, or recorded only by men.... I am confident that many mothers (and other sleepless readers) will pick up this book and feel that they have found an unexpectedly intimate friend." (The New York Times Book Review)
"To read Rivka Galchen is to enter a wonderland where the bizarre and the mundane march in unlikely lockstep." (The Washington Post)
"Galchen has a knack for taking a thread and fraying it, so that a sentence never quite ends up where you expect." (James Wood, The New Yorker)
"Galchen's sentences catch your attention and hold it with a tight fist: Delicious." (Alan Cheuse, NPR)
"Beguiling.... A wunderkabinett of baby-related curios.... A peculiar book, and astonishing in its effect." (Boston Globe)

What listeners say about Little Labours