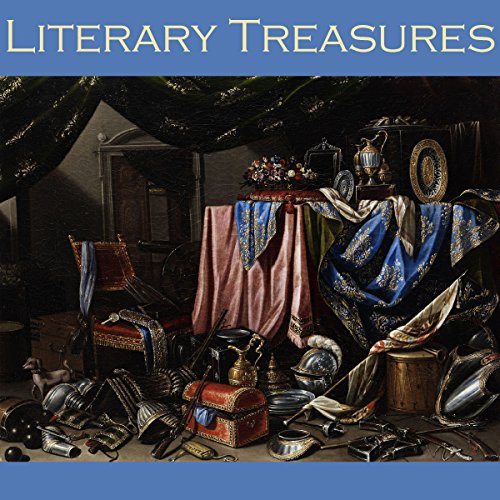 An astonishing collection of fifty of the greatest short stories ever written by some of literature's most highly acclaimed writers.

3. "Twenty-six Men and a Girl" by Maxim Gorky

7. "The Story of an Hour" by Kate Chopin

8. "The Cask of Amontillado" by Edgar Allan Poe

9. "The Encased Man" by Anton Chekhov

16. "Lost in a Pyramid" by Louisa May Alcott

17. "The Pistol-Shot" by Alexander Pushkin

18. "The Three Strangers" by Thomas Hardy

19. "The Boarded Window" by Ambrose Bierce

22. "In the Reign of Terror" by Anatole France

27. "The Brown Wallet" by Stacy Aumonier

28. "The King of the Golden River" by John Ruskin

30. "The Honest Thief" by Fyodor Dostoyevsky

31. "The Model Millionnaire" by Oscar Wilde

32. "The One Million Pound Bank Note" by Mark Twain

34. "The Man with the Watches" by Sir Arthur Conan Doyle

35. "A Poor Gentleman" by George Gissing

What listeners say about Literary Treasures

The stories are good

Cathy Dobson ruined these stories by reading them as if they were nursery rhymes.

It was very hard to follow the stories as the narrator had such a sing-song way of reading, the sense of the words was lost.

Anger and disappointment. Sad to have wasted my credit.

Very dissapointed with the narration:(

I don't know , I couldn't listen to five mins of it.

Would you be willing to try another one of Cathy Dobson’s performances?

I hadn't got round to listening to this till today, thought it would be a great addition to my collection, and now I expect it is too late to return it!

I caught myself laughing crying and clapping my hands like a live performance. Beautifully narrated I will revisit this "Treasure" often.