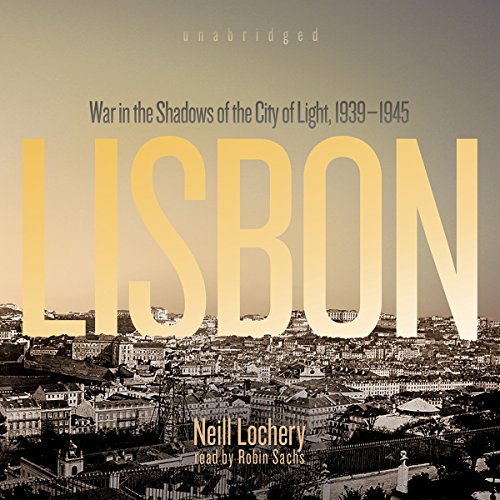 By: Neill Lochery
Narrated by: Robin Sachs
Try for £0.00

Throughout the Second World War, Lisbon was at the very center of the world’s attention and was the only European city in which both the Allies and the Axis powers openly operated. Portugal was frantically trying to hold on to its self-proclaimed wartime neutrality but in reality was increasingly caught in the middle of the economic, and naval, wars between the Allies and the Nazis. The story is not, however, a conventional tale of World War II in that barely a shot was fired or a bomb dropped. Instead, it is a gripping tale of intrigue, betrayal, opportunism, and double-dealing, all of which took place in the Cidade da Luz and along its idyllic Atlantic coastline. It is the story of how a relatively poor European country not only survived the war physically intact but came out of it in 1945 much wealthier than it had been when war broke out in 1939. Portugal’s emergence as a prosperous European Union nation would be financed in part, it turns out, by a cache of Nazi gold.

During the war, Lisbon was a temporary home to much of Europe’s exiled royalty, over one million refugees seeking passage to the US, and to a host of spies, secret police, captains of industry, bankers, prominent Jews, writers and artists, escaped POWs, and black marketeers. An operations officer writing in 1944 described the daily scene at Lisbon’s airport as being like the movie Casablanca - times twenty.

In this riveting narrative, renowned historian Neill Lochery draws on his relationships with high-level Portuguese contacts, records recently uncovered from Portuguese secret police and banking archives, and other unpublished documents to offer a revelatory portrait of the war’s backstage.

“As interested as history readers may be in the spying, the economic war over tungsten and Allied demands for an Azores base dominate this history. A productive archival sleuth, Lochery makes original contributions to the literature of neutrality in WWII." ( Booklist)

What listeners say about Lisbon

Lisbon - War in the Shadows... an excellent read

Excellent writing about a little known 'theatre' during WWII that happened in Portugal. A wide-ranging conscientious indepth researched book with fascinating photographs of the various participants taken during 1939-1945.

The book is more about the way the ruling strongman of Portugal steered the country through World War II, managing to stay neutral, while enduring the pressures of the Allies (and a centuries old Alliance with Britain) and Germany. It covers some of the known places of Lisbon and that is done in quite an interesting manner.

The narration was good, even if the narrator clearly struggled with the correct pronounciation of Portuguese names, with some names completly off the mark.

I enjoyed the book a lot. It's worth a read (or listen) to anyone interested in this period of the history of World War II or Portugal.

I didn’t know much (well truthfully – nothing) about the role that Portugal played in the Second World War when I opened Lisbon: War in the Shadows of the City of Light, 1939-45. I found Neil Lochery’s book both engaging, informative, and entertaining. In this volume, Lochery (While Blame Israel 2011; View from the Fence 2006) tells the story of how dictator Antonio Salazar kept Portugal neutral in WWII and left his country relatively intact after the conflict. I found insights into how Salazar dealt with day-to-day management of the country intriguing. Anecdotes revealing how Salazar made decisions and implemented policies are particularly interesting. Certainly, Salazar was a gifted leader in this context. I would have appreciated more discussion of fascism in this context and how Salazar fit into that era. Perhaps Lochery has another book which will shed more light. At any rate, I was well rewarded by reading this book. The narration of Robin Sachs is excellent.

A remarkable period in the history of Lisbon

I was born in Lisbon and in my youth I still glimpsed the city and times the book refers to.

I felt transported to that epoch, such is the coherence of what I remember and know with the atmosphere recreated by the story and the narration.

I was unaware of some of the details of the planned occupation of the Azores and the gold trade but they certainly seem believable and in line with the known (to me) facts.

To the end the book abandons description and turns judgmental: it would have been a better book without that unnecessary twist.

great story but the writing could be better

The writer presented this too much like what I remember history books I read in school. Although the story is great and compelling, it could have been written much better

learning the story and role of Lisbon during the war; we had visited it this fall

And I thought it was just the Allies who won WW2

While I thought the narrator was very dry and monotone, I found "Lisbon: war in the shadows of the city of light" to be a very interesting book. I had no idea how much a player th neutral Portugal had been, on both sides, during WW2. The port city of Lisbon was major hub for european refugees headed for North America and Palistine as well as locally mined tungstan bound for Nazi Germany. The cafes and casinos were full of spies, celeberties, and royal ex-patriots and seemed alot like the real life version of the movie Casablanca. As much as I did enjoy this book, I did find it tragic that the Portugese Government was able to profit to the degree it did off of the suffering of others.

What did you love best about Lisbon?

book is easy to listen to. very interesting in its narrative. It portrayed Mr Salazar in a very interesting light, certainly an immensely smart man that dealt with both warring sides with great diplomacy and tact and was able to keep Portugal safe. He describes in a very entertainng way the intricacies of the relationships taking place during the war,

WRONG TITLE NOT ABOUT LISBON

I got this book included in my subscription, if I had paid for it I would have sued under false description. The book opens likening it the story of Casablanca, it is not, it contains little of intrigue or glamor. It is a biography of an evil anti semetic Nazi sympathizing dictator, written by someone who viewed him through rose tinted glasses.

A Sideshow That Played A Major Role in WWII

Portugal and its capital Lisbon were neutral during WWII. Despite this, Portugal played a major part in some of the key dramas, escapees from the pending Holocaust, wartime profiteering and asset/gold looting. The author paints a very interest scene of what a decadent wartime city of intrigue and deception Lisbon was. This is an area of history that has been largely neglected. I found it highly engaging and informative. Excellent narration.

I listened to this book and wonder whether I would have finished it if I'd been reading it on the page. Lisbon was the Casablanca of the famous movie, the place where spies and diplomats and bankers all met to do their wartime business in a neutral capital. This is first and foremost the story of Salazar, the dictator who ruled Portugal for 36 years. His greatest achievement was to keep Portugal neutral through the war which meant he traded with both the British and the Germans.

I am a World War fan and thought I knew all about the first and second World Wars, that is until I read (heard) Lisbon. The story was fascinating. Portugal was lucky to escape the horrors of the 2nd world War, but could well have been entrapped into it. Its refusal to accept the fleeing Jews was indeed very sad and may have left a stigma on the nation. However a very good listen.

This was a fascinating book about a period of WWII that is not frequently covered. I really was able to get a good feel for what life was like in neutral Lisbon during that treacherous time. You are taken on a journey into the lives of European refugees seeking passage wandering through the pricey hotels to the various celebrities, spies and Nazi officers that occupy the casinos and restaurants. It’s an education of how all the earliest spy characters came into being, tracking both Ian Fleming and Graham Greene who were living there. There is also an interesting look into the balancing act that the Dictator Salazar had to perform between the alliance and the axis to serve Portuguese economic and national interests. The book portrays the dictator as a very shrewd and cool customer but does not go into the abuses that he is famous for. I would have loved to have learned more about why Portugal made the decisions it did and gotten a few more anecdotes into the adventures of some of these characters on the streets of Lisbon, but that just shows how much I enjoyed the book. Another helping please….