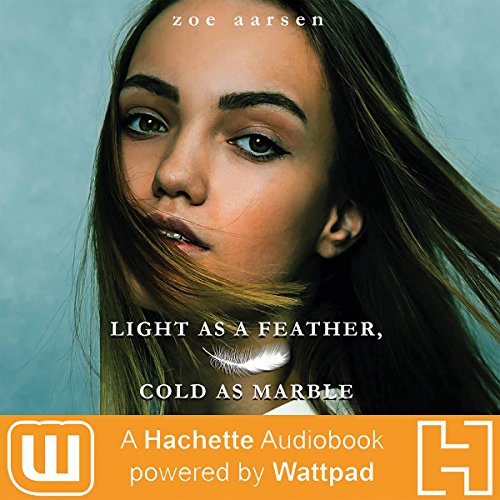 Light as a Feather, Cold as Marble

Light as a Feather, Cold as Marble is a new release from Hachette Audiobooks: Powered by Wattpad - an innovative collaboration between Hachette Book Group and Wattpad. Your favorite Online stories, now available in your headphones!

In this sequel to Light as a Feather, Stiff as a Board, 16-year-old McKenna Brady returns home to Weeping Willow, Wisconsin, after being sent to reform school. McKenna still believes that Violet, the new girl who arrived in her town earlier that fall, cast an evil spell on her friends which resulted in two of them dying exactly how Violet predicted they would. Although McKenna has missed her mom and boyfriend, Trey, while she's been off at school, she doesn't mind the punishment she's been issued, because she's confident that she and Trey were successful in breaking Violet's curse and saving their friend Mischa's life.

However, it isn't long before McKenna realizes that not only did she and Trey fail to break the curse, but Violet's been casting it on new victims while they've been out of town. Now, Mischa will be next to die, and there are many more lives at stake. Complicating matters, both McKenna and Trey are due back at their respective boarding schools shortly after New Year's, and their parents are committed to keeping them separated and out of trouble. And worst of all, McKenna is starting to wonder if Trey's keeping secrets from her that are putting her in greater danger.

Desperate to unravel the secret of how Violet came into her powers and overthrow her once and for all, McKenna enlists the aid of Henry Richmond, who is eager to avenge his sister's untimely death. Along with Trey, they follow the instructions they've received from ghostly sources to break the spell by forcing Violet to once again play the game that started it all. As McKenna begins to understand her own uncommon ability to communicate with dead spirits, she wonders if their guidance will be enough to outsmart the forces of evil aiding Violet.

What listeners say about Light as a Feather, Cold as Marble

great story wish there was a PT. 3

loved it. great book. would recommend to anyone. wish there was another book. awesome. great story