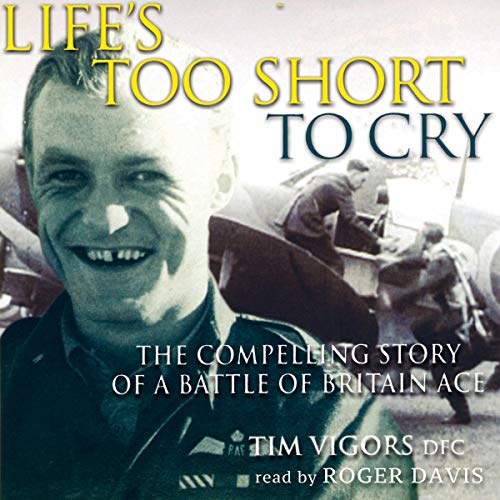 Life's Too Short to Cry

It is not often that a long-hidden gem of a manuscript is published, bringing a moment in WWII history to vivid life for today’s audiences. Geoffrey Wellum’s First Light was one example. The memoir of Timothy Vigors is another.

Born in Hatfield but raised in Ireland and educated at Eton and Cranwell, Vigors found himself in France in 1940 flying Fairey Battle bombers. After the Fall he joined the fighters of 222 Squadron, with whom he saw frantic and distinguished service over Dunkirk and persevered through the dangerous days of the Battle of Britain, when he became an ace.

Vigors transferred to the Far East in January 1941 as a flight commander with 243, then to 453 Squadron RAAF, and on December 10 of that year he led a flight of Buffaloes to cover the sinking Prince of Wales and Repulse. Dramatically shot down, burnt, and attacked on his parachute, he was evacuated to Java, and from there, to India. As he describes these experiences in his handwritten account, the author provides a fascinating and valuable record, a newly discovered personal narrative of air combat destined to be seen as a classic.

What listeners say about Life's Too Short to Cry

The Audible summary is wrong

I bought this because the Audible description states that Vigors flew Fairey Battles in France (I have only read one such biography; by William Simpson, which to my knowledge is the only such full biography in existence). So I was amazed and thrilled to learn from Audible that there existed another biography of a Battle pilot in France, and immediately dug in. But Vigors never did fly Fairey Battles. He trained on bombers (not Battles) by choice, but converted to Spitfires before combat flying. There is no Fairey Battle at all in this book. The Audible description is clearly a mistake, and a very disappointing one. Nevertheless, after realising the mistake, I continued and found this to be an excellent read, and comparable to many of the best Spitfire pilot biographies I've read before.
However I would request that Audible at least do some quality control. They might think that one plane is like any other plane, but a Fairly Battle pilot (or crewman) biography is gold dust (there are so few such personal accounts on record) whereas Spitfire Pilot biographies are common (and once you've read six or seven, you don't learn much more from reading another). I wish there was a category to rate Audible on this matter, since I would give it 1.

beautifully written and a great choice of narrator.

so many book spoiled by the wrong narrator. this os not the case, a perfect match.

this os up there with tge veey best war/pilot bios. a rare gem that has you there with them and gets across the feelings and mood of the time.

if you enjoy war bios then this is a must, up there with Beaumont, Cloisterman, Wellum, etc.

fascinating insight of a WW2 pilot

Tim lived a fascinating life of danger and heartbreak. his honest account of life in the second world war including his friendship of Douglas Barder and his account of why the Prince of Wales was sunk of Singapore are compelling

I've read many wartime accounts but this is the best yet. This man truly had the luck of the Irish

What a generation. The bravest of the brave and always so modest. Just a brilliant story and true!

The best memorial to an amazing officer, gentleman and Irish warrior.
I would go further and suggest this could be adapted as a screenplay to an amazing series along the lines of "peice of cake".
regardless, I do hope the book and audio version reach a wide audience.

Great story having been brought up near Biggin Hill then joined the RAF and now living near Kirton Lyndsey I was engrossed with this book once started could not stop . Highly recommend this

If you like "First Light" by Geoffrey Wellum you will love this book. Narration is well done as well.

The story telling is fantastic. Conversations and observations bring you right into the scene.

The story itself is very interesting and brought a different perspective to the war in Asia and in Britain.