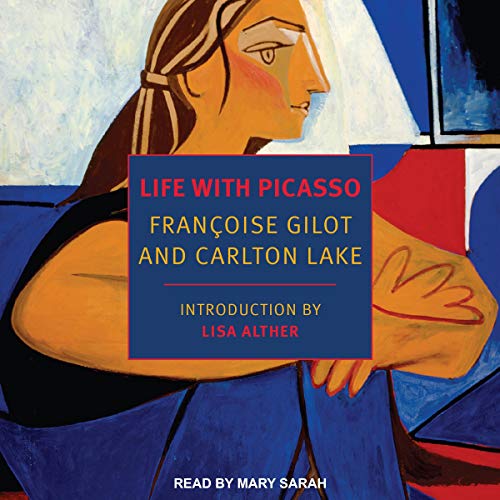 Françoise Gilot was in her early 20s when she met the 61-year-old Pablo Picasso in 1943. Brought up in a well-to-do, upper-middle-class family, who had sent her to Cambridge and the Sorbonne and hoped that she would go into law, the young woman defied their wishes and set her sights on being an artist. Her introduction to Picasso led to a friendship, a love affair, and a relationship of 10 years, during which Gilot gave birth to Picasso's two children, Paloma and Claude. Gilot was one of Picasso's muses; she was also very much her own woman, determined to make herself into the remarkable painter she did indeed become.

Life with Picasso, written with Carlton Lake and published in 1961, is about Picasso the artist and Picasso the man. We hear him talking about painting and sculpture, his life, his career, as well as other artists, both contemporaries and old masters. We glimpse Picasso in his many and volatile moods, dismissing his work, exultant over his work, entertaining his various superstitions, being an anxious father. But Life with Picasso is not only a portrait of a great artist at the height of his fame; it is also a picture of a talented young woman of exacting intelligence at the outset of her own notable career.

What listeners say about Life with Picasso

Fascinating details of Picasso’s life , bizarre and infuriating reading. The reader’s phrasing and lilting way of speaking are extremely distracting and annoying and the decision to narrate characters’ lines with an approximation of French and Spanish/French accents is completely insane and sounds ridiculous . It would be comical if it didn’t take away from the enjoyment of the book so much.

Good story by read by someone who cannot pronounce French.. it drove me crazy, if you read French words, please ensure you get right..

Interesting book, made cringe-worthy by narrator

This is a well written and interesting account of the times and places that Gilot experienced with Picasso. Gilot also shares a lot of the philosophy behind Picasso's way of planning and creating his works. The narrator spoke in a voice so put-on and unnatural that it made me cringe, and she mutilated the pronunciation of a lot of words and names. I'm going to return the audible version and look for a hard-copy.

I'm fond of Picasso, and decided to read this book after watching the eponymous film with Anthony Hopkins.
This is a fascinating autobiographical story, and I'm admired by this woman.
Sometimes I found it hard to listen the audiobook because of French namings and monotonous reading

The tone of the reading is horribly pretentious and the French prononciation is pénible (very poor and contorted).

Fascinating account and insight into Picasso’s work and life. Whispy narration almost ruins it though, Francois is a strong woman and doesn’t sound soft and affected.

Why does this woman talk like this? Like she’s imagining herself to be sitting in the Deux Magots twirling an oyster on the end of a toothpick between finger and thumb? Whilst actually sitting in a kitchen in Morristown NJ. Great stuff in this book, but oh, the pretentious, twee delivery.

The story of Picassos life as told by his wife is excellent. The challenge is to get past the narrators breathy voice. As I listened further, I began thinking that perhaps the lack of emotion (extreme happiness or severe sadness) in the narrator’s voice was meant to portray her life as a child and young woman and the need to hide those emotions from her father. She hid them from Picasso as well. It takes getting used to the narrators voice, but once you do, the story is outstanding.

Great story, but can barely understand the narrator. She has a strange, forced accent and cadence. Her words at the end of phrases and sentences trail off and are inaudible. It’s like she is forcing breath out to create this effect. It’s awful.