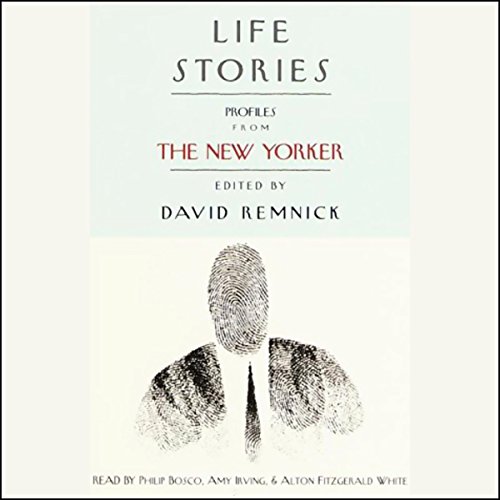 One of art's purest challenges is to translate a human being into words. The New Yorker magazine has met this challenge more often and more successfully than any other modern American journal. Starting with its light fantastic evocations of the glamorous and the idiosyncratic in the '20s and continuing to the present, with complex pictures of such contemporaries as Marlon Brando and Richard Pryor, The New Yorker's Profiles have presented readers with a vast and brilliant portrait gallery of our day and age. These literary-journalistic investigations into character and accomplishment, motive and madness, beauty and ugliness, are unrivaled in their range, variety of style, and embrace of humanity.

When they were first published, these biographies brought insight, amusement, understanding, and often, joy or sorrow to those who read them. Gathered here, in Life Stories, they provide an album of our era, a rich and diverse appraisal of some of the most prominent members of an entire century's cast.

A Pryor Love (Richard Pryor), by Hilton Als
A Duke in His Domain (Marlon Brando), by Truman Capote
Isadora (Isadora Duncan), by Janet Flanner
Lady with a Pencil (Katharine White), by Nancy Franklin
Nobody Better, Better Than Nobody (Heloise), by Ian Frazier
The Coolhunt (Baysie Wightman and DeeDee Gordon), by Michael Gladwell
Wunderkind (Floyd Patterson), by A.J. Liebling
Mr. Hunter's Grave (George H. Hunter), by Joseph Mitchell
Show Dog (Biff Truesdale), by Susan Orlean
How Do You Like it Now, Gentlemen? (Ernest Hemingway), by Lillian Ross
The Man Who Walks on Air (Philippe Petit), by Calvin Tomkins
Covering the Cops (Edna Buchanan), by Calvin Trillin

"Too good to be missed." ( AudioFile)

What listeners say about Life Stories

These profiles are so extraordinary that I searched the Internet for others, and discovered the table of contents for this book. Having ordered from Audible an "unabridged" book, I was astonished to find that the Audible version omits about half the content of the print edition. Even at half its advertised length, the Audible version is a gem and well worth it.

I have to admit that the Truman Capote story on Marlon Brando was a bit disappointing. But the rest, oh my! What a wonderful book of stories; it starts with Lillian Ross on Earnest Hemingway; then goes to Katherine White, one of the founding editors of the New Yorker; then goes on to profile boxers, "cool finders", a tightrope walker; Heloise (from Hints from Heloise); Edna Buchanan (Miami crime beat reporter); Isadora Duncan, and even a champion show dog. My two favorites were Mr. Hunter's Grave by Joseph Mitchell and A Pryor Love (about Richard Pryor) by Hilton Als. Mr. Hunter's Grave was not really about a person so much as about a small town on Staten Island; I know, I don't make it sound like much, but really, I hated to have it end. The story on Richard Pryor was insightful -- it showed the flaws in the man with such compassion and with enough understanding of Mr. Pryor's past to show how it all worked together first to make him into a celebrity, and then brought him down again.

The narration on all the stories is good, but it is the writing that really makes this book stand out. It is the sort of writing that transports you from where ever you are into the world being profiled. You come away wanting to know more about the people discussed, and feeling like you may have met some new friends. 10 hours is not enough for this book; I hope they will put out the unabridged edition. I will go back and listen to these stories again.

This audiobook is pure gold - a broad myriad of profiles, colorfully written and perfectly read by performers, such as Amy Irving, whose voices enhance rather than invade the writing. I had read some of these excellent profiles in the New Yorker, but this format gave them new life. This is a highly entertaining and intelligent series. I'm only sad that I've not yet found second installment of Life Stories in audiobook, though I'm still searching.