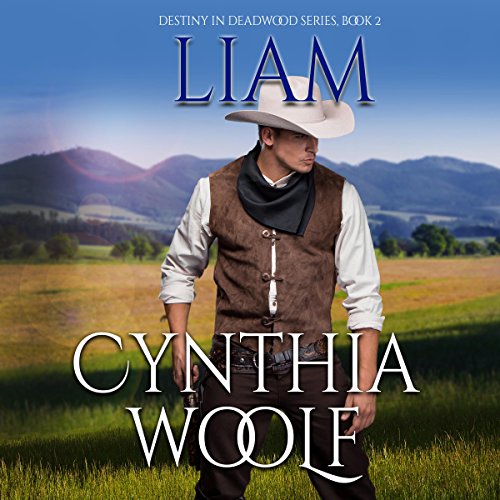 All Liam Anderson wanted after the War Between the States, was a little peace. After 17 years in the army, he's tired of fighting and killing. Having lost his beloved wife to influenza, he's tired of hurting. And seeing his baby brother framed for murder, he's tired of injustice. He left everything behind to help his brothers escape, packed up his children and possessions, and took them all to a gold claim in Deadwood.

Miss Eleanor Smith is a 32-year-old spinster. She gave up her dream of a home and family a long time ago. Instead, she has spent her life traveling the world, ministering to the weak, the injured, the poor, and the forgotten, following her preacher father from one hell hole to another. From what she's seen of men and the world, she's better off taking care of herself. And she gets along just fine, until she literally falls into Liam's arms, gets in the middle of a fight that isn't hers, and becomes a pawn for an enemy's revenge.

Deadwood was supposed to be a fresh start for Liam Anderson and his younger brothers, but trouble followed him and his children. And when Eleanor disappears, only Liam can rescue her. The headstrong, independent woman awoke his dead passion, but refused to surrender to his touch. Can he convince her that merely surviving isn't enough? Despite his sins, he's the only man who can save her, and she's the only woman strong enough to heal his broken heart.

What listeners say about Liam

Liam and Ellie? Can they really learn to love each other?
How do they meet? Ellie is the preacher's daughter, very stiff and no one thinks she is pretty. Yet someone does.

Liam has to do something for his brother's to clear them,
clear them of what? Where does he go and when will he come back?

I really enjoyed listening to this story. I highly recommend that you get this incredible Audiobook and listen to it yourself because I'm sure you will enjoy it too!

Listening to the narrator was wonderful, it was like I was right there in the story. I think you will enjoy listening to her too.

This Is A Great Story!

Cynthia Woolf has written a real home run with this series. The Anderson brothers and their respective wives and families are so interesting. The stories in this series all have intrigue and intimacy wrapped together in just the right ratio to keep you interested.

The story just gets better!

I really liked this book! Cynthia builds upon her first book and deepens both the conflict started in Jake and the deepening bonds between brothers.

Liam is the oldest brother and it is evident how he cares for not only his children, but also looks out for his brothers and tries to bring justice to the man who raped and killed his little brother's fiance. Now, the killer is aiming for Liam and all he loves. This includes persuading the lovely, selfless preacher's daughter.

This book is a bit on the spicy side if this concerns you.

This book was given to me for an honest opinion and review.