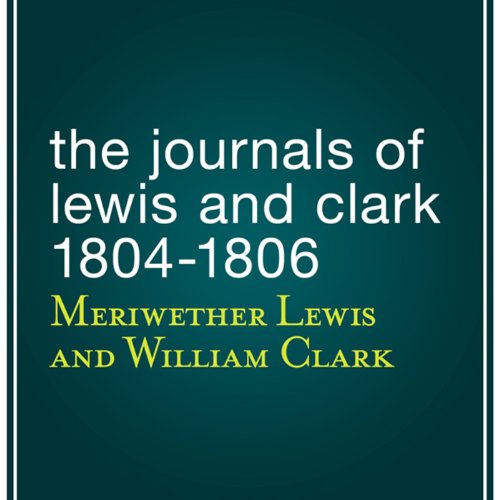 By: William R. Lighton
Narrated by: Kevin Stilwell
Try for £0.00

The expedition commissioned by Thomas Jefferson and led by Meriwether Lewis and William Clark from 1804 to 1806 is a well-known venture to chart and explore the northwestern area of what became the United States. Here is an account in their own words of that journey, from the notes taken by Lewis and Clark. The audio contains countless remarkable stories, however it is very near to the original source document and Kevin Stilwell, who performs the journals steadily and unwaveringly, powers through the sometimes challenging accounts with journalistic gravity, rewarding any Lewis and Clark fanatic or student of early American history with a valuable and intimate look at one the country’s most renowned expeditions and it’s first impressions of the land.

In the years 1804, 1805, and 1806, two men commanded an expedition which explored the wilderness that stretched from the mouth of the Missouri River to where the Columbia enters the Pacific, and dedicated to civilization a new empire. Their names were Meriwether Lewis and William Clark. This book relates that adventure from it’s inception through its completion as well as the effect the expedition had upon the history of the United States.

What listeners say about Lewis and Clark

Small wonder this takes seventy hours , everything is repeated two or three times , boring like you can’t believe , ideal for insomniacs , give it a miss .

The best book I have read or listened to.

This book is the unabridged diaries of the famous Lewis and Clark 1804-1806 journey across the US continental divide to the Pacific Ocean and back. It was a triumph and I was gripped from the opening to the end, 70 hours later. It reads the diaries of Lewis and then Clark for each day. It can be repetitive as they often copied each others diaries or field notes so that each had a comprehensive record of the entire journey. But it is worth it. This is the only way to get into the minds and the emotions of the explorers. Books about their travels which condense and summarise the plot now seem glib by comparison and some of the TV/youtube documentaries about the journey are quite inaccurate. The meeting of Sacagawea and her people after her abduction by Plains Indians and return by the Corps is a high point. As is the true friendship that seemed to arise between the Corps and the Nez Perce tribe. I would recommend using googlearth to map the journey - I got a lot more out of it knowing what they were describing. I won't read an exploration book that isn't the true words of the explorer after this. Magnificent!

The narration was also excellent. Just the right accent to make it believable (to a Brit) that it is being read by the authors and the right intonation to display some of the emotion of the journey but where the diaries were written at leisure in the evenings or some days after the events they describe (from their rough field notes).

I've never heard the word etcetera so many times

What disappointed you about Lewis and Clark?

Virtually every thing said in this book is repeated at least twice, making the book twice as long as it should be. This includes each date and who is speaking. After about a half hour you want to quit listening.

The actual stories told by Lewis and Clark are very interesting in spite of their being told twice for each day's story and each person's story for that day.

If you could play editor, what scene or scenes would you have cut from Lewis and Clark?

I actually wouldn't cut much of the story out except the repetitive stating of etcetera, etcetera over and over again.. I would just tell the story once instead of twice. That would cut listening time to about 30 hours instead of the 70 hours and 28 minutes that will take to listen to this story unless I go completely crazy hearing every passage repeated twice or more times and the word etcetera spoken thousands of times during that 70 hours and 28 minutes.Yet in those 30 hours you would hear every word Lewis and Clark originally wrote, missing nothing except the repetition.In fact, I may go to the LewisandClarkTrail.com site and just read their words exactly as they wrote them. It would be a bit harder since they are written verbatum with all of the spelling of that time included.An example of a passage I just listened to about 1 hour ago:September 30, 1804 (Camped on a sandbar in Sully County, South Dakota, just below the mouth of Cheyenne River)"had not proceeded on far before we discovered an Indian running after us, he requested to come on board and go up to the Recorees we refused. Soon after I descovered on the hills at a great distance great numbers of Indians which appeared to be making to the river above us, we proceeded on under a Double reafed Sail & some rain. The Stern of the boat got fast on a log and the boat turned & was verry high, The Chief on board was so fritened at the motion of the boat which in its rocking Caused several loose articles to fall on the deck from the lockers, he ran off and hid himself, we landed, he got his gun and informed us he wished to return, that all things were cleare for us to go on, we would not see any more Tetons. We repeated to him what had been said before, and advised him to keep his men away, gave him a blanket a knife & some tobacco, smoked a pipe & he set out. We also Set sale."

Yes, this series really does need to be edited to eliminate the duplication of every passage or virtually nobody will be able to make it through the book. I have listened to about 9 hours and am ready to give it up and read a different book before I go insane. I am puzzled why the duplication wasn't edited out since reading each narrative twice adds nothing to the story and the constant use of etcetera is extremely irritating. What is strange is that when I read their actual Journal entries in their Archives there is no repetition nor have I seen the word etcetera even once. So is it the author of this version who chose to make reading their experiences so tedious and make what was an exciting adventure sound like watching ice melt?If so, it is a disservice to Lewis & Clark as well as to Audible listeners.

Very interesting document, wonderfully read by narrator
Lewis and Clark were so well prepared and educated.
It is too bad not to know more about the other men on the expedition.

Great information but almost everything is repeated twice and often 3,4 or more times . Got a blister on my little finger from the fast forward button

As a huge fan of historic adventures, Lewis and Clark did not disappoint. There are many repetitions due to Lewis and Clark writing the same things many days but it helped pass the time on long drives.

this was a very interesting account. there are many surprising notes the explorers share. definitely worth the time.

I would have removed at least some of the duplicate material. It’s nice for historical accuracy, but makes listening a bit tedious.

The narrator was good, IMO, clear and easy to understand. And of course a great story, much more than what I was taught in school.