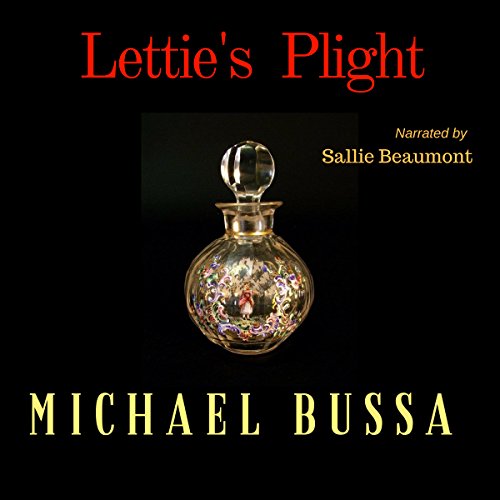 Born in the Victorian era, in the slums of Bethnal Green in the darkest of London, Lettie vowed to leave a miserable life behind. But when she forges a new life, in a new town, she finds herself trapped in a loveless marriage, living the very life she had left behind in Bethnal Green. When she finally has enough money, Lettie waits for just the right moment to leave her abusive and controlling husband, Roman, who would do anything to keep her confined. What will Lettie do?

What listeners say about Lettie's Plight

Thank you to Michael Bussa for providing me with a free audiobook in return for an honest review.

A Victorian thriller short story following a woman unhappy with her life who decides to do something about it.

THE GOOD STUFF
I really like the Victorian era, it’s the one historic style that I do enjoy reading, and Michael Bussa, I feel catches the atmosphere perfectly.

The characters are very well written. I felt sorry for Lettie and how unhappy she was in the first few chapters. Her husband was also very well written, although he wasn’t physically abusive, I really hated him.

NOT MY CUP OF TEA
The story was fantastic, the narrator on the other hand…I felt cheapened this lovely little story a bit. Sallie Beaumont has a lovely reading voice, but as an English listener, her English accent was absolutely terrible.

I wasn’t really a fan of the random sound effects after each chapter either.

OVERALL RATING
The story was fantastic. Michael Bussa is obviously a very talented writer and I would love to read more of his work. This would be five stars if it weren’t for the narrator’s awfully fake accent.

This is for both of us, laddie.

A curious sort of morality tale, just 30 minutes in duration, which is distinguished by the atmospheric imagery of place and time. A young girl, born into the stark poverty and cruel drudgery of London's Bethnal Green in Victorian times, determines her place is not there, the hard daily grind not for her, and that she will raise herself up into a position of gentility.
Although a neat little story in itself, it did raise a couple of questions, not answered, in this reader's mind, which I am unable to divulge further without revealing too much of the already brief story. One mention, however: a pound might seem very little now, but in Victorian London, to an ordinary workman, let alone a woman, it would have been considerable wealth.

Narrator Sallie Beaumont has a very pleasant sounding voice, quite deep and rich, with just a tinge of an Antipodean accent. She also gives good differentiation between her character's voices. Sadly, however, for a story in large part made up of conversational speech, her Cockney accents are woefully bad, seriously rivalling Dick Van Dyke's performance in Mary Poppins, no, sorry, her accents are worse since they do not even remain consistent. This is a considerable distraction, especially for an British listener. An unfortunate choice, therefore, especially as the author's written dialect appears true, as far as this reader could determine.

A nice touch to the audible experience was a very brief sound bite of old London life between each short chapter. My thanks to the rights holder who, at my request, gifted me a complimentary copy of Lettie's Plight, via Audiobook Boom. It was fun, querky and a quick listen. With a more authentic narrator, the rating would have been higher.

a very cool and nice Thriller not a long book but the full story it's very important to know how to write a short book and this book was absolutely five stars I liked it very much
I was given this free review copy audiobook at my request and have voluntarily left this review.

How do I not give something crucial away? I think the author’s description did a pretty good job. There is some murder that happens in a #metoo vein, you see it coming pretty early. You might not see the resolution of the story so easily.

Narrator did a really good job.

Excellent thriller for such a short story. Lettie's complex characterization comes through, as does that of her husband, Roman. The author does a great job of detailing the physical setting, emotional conflict, pacing and irony in this story. I enjoyed every minute.

The narrator did a nice job telling the tale. It was easy to follow along.

Fans of historical thrillers will enjoy this audiobook. Perfect for those with limited time for listening.

This was a very short but good listen. For being so short, it is a surprisingly full story. The narration, too, is pretty good.

...in story and another in production. Narrative is intriguing. Listener feels for Lettie's Plight, undeserved oppression and unfair treatment from her husband - whom she thought would be her salvation from poverty. Details woven well together to let the twists unfold. Plot glitch is in lack of motivation - the boys for their giggling earlier than they could have planned their eventual actions and Lettie's for her sympathetic guilt and then relieved "release." I understand the sound effects as a transitional device. The production glitch was in the earlier transitional sound effects which were mostly distracting though, pleasantly, they became more finessed through the latter part of the audio book. This is one you'll want to listen to.

This book was given to me for free at my request, and I provided this voluntary review.

Lettie's Plight by Michael Bussa was a good quick read. The book is set in the Victorian era. Lettie always said she would never be like her mother no matter what. I enjoyed this book.

Terrific short story. Interesting premise with believable characters. Lettie isn't particularly sympathetic she's a little too much of a schemer but one can certainly sympathize with her plight. Corletta or Lettie grew up in Bethnal Green in a working-class family and she doesn't want to end up a drudge like her mother. So she plots and schemes her way into marrying a man who she thought would raise her station in life but in reality not much changes. She comes up with a plan... I don't want to give away any spoilers I'll just say in the end she works hard and ends up with what she wants and thinks she deserves plus a little extra. The story was well crafted to draw the listener in and the narrator was excellent. Her accent was the perfect touch.

I requested a review copy of this on Audiobook Boom received a free copy in return for the promise of an unbiased review.

even when you might think you've finally succeeded. This is a short, dark, and depressing story of people caught up in their personal hell and desperate for any type of escape. There are a couple of twists to the story which, though unexpected, are not totally surprising. The two most redeeming parts of this work are the descriptive settings of time and place, but even more so is the excellent job Sallie Beaumont does with the narration. Give her Brit accent and varying dialects, she does a wonderful job with bringing the characters to life. If fact, it is based on her performance that I gave this listen the high rating that I did. If you are looking for something a little different, albeit rather bleak, I would recommend giving this a listen based if only for the narration. Don't get me wrong, the story and descriptions are well done . . . just not for everyone.
A review copy of this audiobook was provided by the author, narrator, or publisher at no cost in return for this unbiased review. If you found this review helpful, please take a moment to click yes below.

The Story of Lettie

I enjoyed this short story set in Victorian England. It had some nice twists, although the motives of one of character's actions toward the end could have used some clarification. I wasn't a big fan of the dialogue which was written in a sort of Cockney/poor Londoner style, although this may be due to the narration. Sallie Beaumont does a decent job overall, I just didn't care for her performance on the dialogue. The way this is written is more focused on the narrator telling you the story of Lettie, and as such the dialogue is kind of secondary, which works well, I think.

Overall a darkly enjoyable short story with some sinister twists.

I received a copy of this book for free in exchange for an honest review.