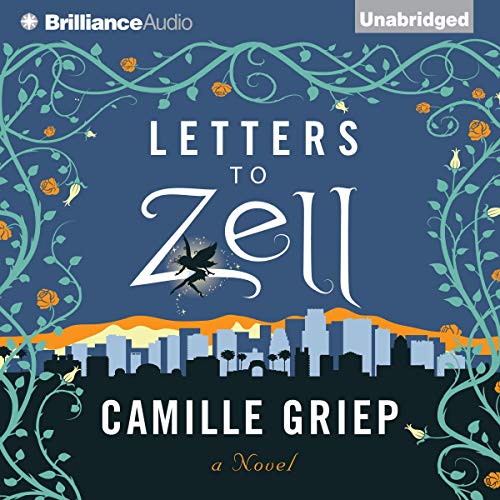 Everything is going according to story for CeCi (Cinderella), Bianca (Snow White), and Rory (Sleeping Beauty) - until the day that Zell (Rapunzel) decides to leave Grimmland and pursue her life. Now, Zell's best friends are left to wonder whether their own passions are worth risking their predetermined "happily ever afters", regardless of the consequences. CeCi wonders whether she should become a professional chef, sharp-tongued and quick-witted Bianca wants to escape an engagement to her platonic friend, and Rory will do anything to make her boorish husband love her. But as Bianca's wedding approaches, can they escape their fates - and is there enough wine in all of the Realm to help them?

In this hilarious modern interpretation of the fairy-tale stories we all know and love, Letters to Zell explores what happens when women abandon the stories they didn't write for themselves and go completely off script to follow their dreams.

What listeners say about Letters to Zell

A very imaginative take on princesses

Read more reviews as The Bibliosanctum. This story starts when Zell (Rapunzel) unexpectedly leaves her friends to move to the “boonies” (Oz) to run a unicorn farm with her husband Jason and her twins. Zell’s circle of friends consist of the prim and proper Rory (Briar Rose/Sleeping Beauty), the foul-mouthed and cynical Bianca (Snow White) and the levelheaded CeCi (Cinderella). The inhabitants of fairy tale land know that they’re supposed to live out their pages to their happily ever after. With Zell’s sudden departure, her friends find themselves in a sudden flux as they begin to rebel against their stories and start to find themselves. This book is told through a series of letters from each woman to Zell as they go from the pain of dealing with her departure to creating a happily ever after on their own terms.

Imaginative retellings are one of my favorite types of story because I love seeing how authors reimagine old characters and old stories. This story was like a fairy tale version of Real Housewives. Zell apparently met her prince while he was roaming the woods blind and she was pregnant with twins. She restored his eyesight and they married. You don’t learn too much about Zell other than little tidbits of her story, which was disappointing. Rory is married to a prince who doesn’t care for her much. She tries to be perfect and tell herself that loves comes eventually, even though she loved someone else before marrying her prince. She’s one of those women who tries to act like everything is beautiful while inwardly falling apart. CeCi has a great relationship with her prince. They truly love one another, but she’s starting to feel they’re beginning to drift in two different directions. The things she loves to do (cooking) she has to hide from him because he said that part of her fairy tale is over and she’s no longer a servant. However, she wants to do this because she loves it, and she wants to share this love with him. And then there’s Bianca… Oh, Bianca…

Bianca was probably favorite Princess because instead of sweet Snow White sobbing in the forest with her animals friends and the dwarves we get Bianca who doesn’t take anyone’s shit, who’s cynical about love and the role women play in these stories, who admits that she’s sexually attracted to women and men and gratuitously uses foul language. Bianca argues: “It’s irresponsible storytelling. Love can certainly include the occasional experimental romp in handkerchiefs or a playful smack on the behind with a riding crop, but it doesn’t involve isolation and belittlement. Star is already worthy of Sabian. What does she have to reinvent herself for?”

Despite Snow White’s general curmudgeonly attitude, she does have a gentle heart. While she despises what her stepmother put her through, she has no desire to exact revenge and isn’t looking forward to having to possibly execute her in her happily ever after. She doesn’t blame her father, who loves to travel, for not being around to protect her. She petitions the powers to allow Huntsman to return from exile because she believes that he did the only thing he could considering the circumstances. She has no desire to marry the prince she’s fated, too, even though she lauds his great qualities and believes him to be a great man and a good friend to her. She doesn’t want what the pages tell her is her happily ever after. She wants to create her own. They all want to create their own. They want to be the narrators of their own stories.

A few complaints I do have is that the letter writing format can be a little jarring and disjointed. Sometimes, it’s too much like being a “chaptered” story where one letters is just really a continuation of the last letter’s story. Some of the moments that were so important to the characters were glossed over in their letters. Also, certain letters can get a little tiresome, even repetitive, especially Rory’s whose letters have to continuously be a “Everything is fine” mantra, even though I understand why they’d be like that. Sometimes, this book felt like it was going into young adult territory with some of the dialogue and scenarios. I’ll also concede that sometimes it’s hard to get to the meat of their issues with the way they complain. Like wanting to write Bianca off as just a catty witch instead of seeing the woman who wants to just be and leave this vengeance thing behind. These type of things can take readers out of the story.

However, don’t think this is a serious read. While there are certainly serious themes here, this book is infused with humor. While some of it made me smile, I won’t say it was laugh out loud funny. Some of the jokes were a little corny, but the narrator, Amy McFadden, caught the varying tones of the princesses well. Rory’s voice was whimsical and dream like. CeCi’s voice was conversational and levelheaded. Bianca’s voice was tough and unladylike. She didn’t do a great job with male voices, but readers should take care to remember she’s reading these letters in the tone of the princesses, so it makes sense the male voices wouldn’t be that great. She’s creating a semblance of a male voice as the princess would. These princesses are catty, cordial, selfish, selfless–in other words they’re very flawed as any person. They complain, they whine. But if you look through their words you can see more shaping up. If stories that turn your favorite princess into less that some self-sacrificing damsel upsets you, turn away from this book. This was one of the more fun retellings I’ve read, but this absolutely won’t be for everyone. I’d rate this between 3 and 3.5 stars, but I am feeling generous because I liked some of the themes. With that being said, I’ll leave you with this quote from Snow White:

“We’re all at risk of becoming imprisoned within our own mirrors. By our expectations of ourselves. We are vain or unkempt, bitches or sycophants, mothers or monsters, queens or servants.”

I loved this book! It was a great story and I liked that the end wasn’t just nicely packaged up and tied with a pretty bow. As for the characters even as fairytales they were relatable and funny. I definitely didn’t expect this book to be so good. I had added it to my Audible library years ago and just decided to read it now. I’m so glad that I did. A nice little diamond in the rough!

I struggled to finish this book. It wasn't what I thought it would be. It a bit boring and All over the place .

From the moment I started listening I was intrigued. A modern day fairy tale? I was sure it would be a "happily ever after" scenario with a modern twist and not much more. Boy was I surprised! Not only has Griep managed to take what we thought we knew about Cinderella, Aurora, and Snow White, and toss it on it's head, but she also made them human. They have fears and dreams with which any of us can identify. I truly loved this story. I honestly expected a hokey romance. instead I found a story that made me think.

This such a fun read. It’s a whole new way to look at fairytale characters. The story was entertaining.

A Fun, Gut-Wrenching Dive Into Relationships

Not only can Camille Griep get into my head, (witness More Reflections on Letters to Zell and Not Being "That Kind of Guy") but she seems to have lived several lifetimes to be able to write such a fun yet never frivolous deep dive into relationships. How does she make thoroughly entertaining, engaging, challenging and even page-turning exciting letters to the fairy-tale princess Rapunzel from her friends Snow White, Sleeping Beauty, and Cinderella? (See Goodreads for a summary of the plot.) I think maybe she has more than a little fairy magic herself. Of course, Zell, Bianca, Rory & CiCe aren't as we imagined them, nor is Grimmland. I'm now thinking Ms. Griep's words bewitched me because I've done things I've never done before. I wrote two posts prior to finishing the book. I rarely do multiple posts on the same book, but have never posted before I've read the whole thing. I felt a little like a stalker blog. The first two posts aren't reviews, but musings on topics inspired by the book, its characters, and their relationships. Oh, wait, this her debut novel as well. Definitely magic.

This book makes you reflect - a lot. You reflect on how truthful you are with yourself and others. It makes you realize that almost all of your actions are tainted by selfishness; as a pastor friend once told me "I've never met an unmixed motive." It makes you reflect on the ethics of pursuing what seems right for you juxtaposed to the impact on others. It makes you think about unintended consequences and when helping hurts. Most of all, it shows the importance of genuinely listening. Not listening to make a point, or give advice or fix an issue. Rather, giving and receiving full-on, face-on listening. All of that reflection, however, is bundled in this delightful package of the challenges these women face and working through it via letters to their now distant friend Zell

As is my wont, I went between the Audible version, narrated by Amy McFadden and the Kindle version. The voices of Bianca, Rory and CeCi will indelibly be imprinted on my mind with Ms. McFadden's performances. I'm a fan of Ms. McFadden's narration being introduced to her through The Paper Magician series. Indeed, it was the fact the she narrated Letters to Zell (and its cool cover) that brought my attention to the book.

Get to Know those far away princesses inthier own realm and ours.

All of the familiar fairytail princesses come to life in relationship to each other and a few human people in LosAngeles in the correspondences with each other in this collection of letters. We can look forward to learning some of the plans and dreams not seen in the stories we
read as children . They have lived on and we have too!

Good listen, but hard to keep track of who was who

Good just for listening and fun. My only problem was trying to remember which person was the fairy tale person.