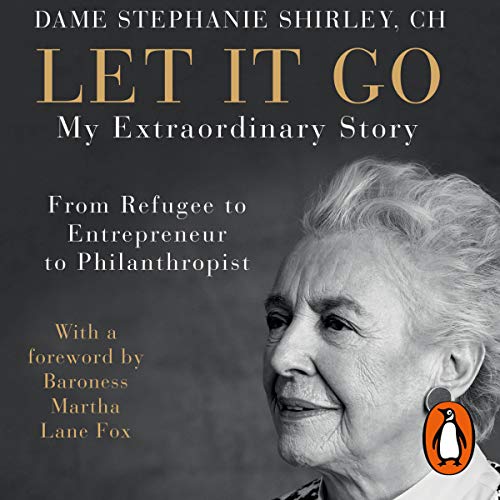 A moving memoir from a woman who made a fortune in a man's world and then gave it all away...soon to be turned into a film

In 1962, Stephanie 'Steve' Shirley created a software company when the concept of software barely existed. Freelance Programmers employed women to work on complex projects such as Concorde's black box recorder from the comfort of their own homes.

Shirley empowered a generation of women in technology, giving them unheard of freedom to choose their own hours and manage their own workloads. The business thrived, and Shirley gradually transferred ownership to her staff, creating 70 millionaires in the process.

Let It Go explores Shirley's trailblazing career as an entrepreneur, but it also charts her incredible personal story - her dramatic arrival in England as an unaccompanied Kindertransport refugee during World War Two and the tragic loss of her only child, who suffered severely from autism.

Today, Dame Stephanie Shirley is one of Britain's leading philanthropists, devoting most of her time, energy and wealth to charities that are close to her heart. In Let It Go, Shirley tells her inspirational story and explains why giving her wealth away - letting it go - has brought her infinitely more happiness and fulfilment than acquiring it in the first place.

"An extraordinary tale of creativity and resilience." (Guardian)

"This engrossing story of an extraordinary life is filled with lessons in what it means to be human." (Financial Times)

What listeners say about Let It Go

I learned so much from this book. I really enjoyed the style in which it was written and the format in the early part of the book of alternating chapters relating to family life with those describing Dame Stephanie Shirley's career. It was an incredibly honest autobiography and the message of "letting go" is one that really resonated with me. This is a book about business, personal development, motherhood, marriage, love and trust and I have already recommended it to many others.

An incredible life story from an amazing woman!

This book is an inspiration for all women from all ages, all walks of life and specially for mothers. Thank you!

A truly amazing life story. An inspiration for us all. Very well written and a pleasant voice to listen to. I wished I had the opportunity to have met Dame Shirley who has certainly left a remarkable foot print on this planet, thank you!