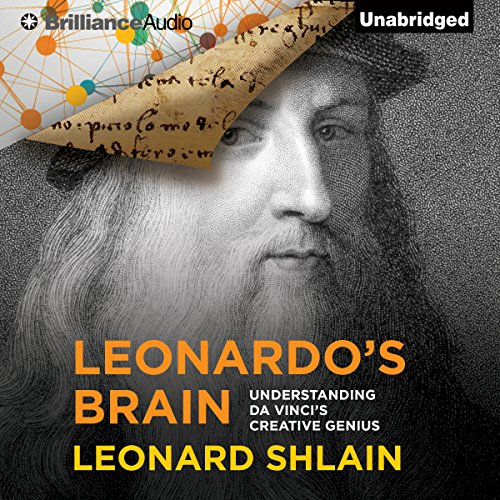 Bestselling author Leonard Shlain explores the life, art, and mind of Leonardo da Vinci, seeking to explain his singularity by looking at his achievements in art, science, psychology, and military strategy (yes), and then employing state of the art left-right brain scientific research to explain his universal genius. Shlain shows that no other person in human history has excelled in so many different areas as Da Vinci and he peels back the layers to explore the how and the why.

Leonardo's Brain uses Da Vinci as a starting point for an exploration of human creativity. With his lucid style, and his remarkable ability to discern connections in a wide range of fields, Shlain brings the listener into the world of history's greatest mind.

Shlain asserts that Leonardo's genius came from a unique creative ability that allowed him to understand and excel in a wide range of fields. From here Shlain jumps off and discusses the history and current research on human creativity that revolves around the right brain-left brain split. Most of us now know that there is a split between the right and the left side of the brain; the left primarily controls our rational mind, the right our emotions.

Shlain discusses the cutting edge research that is refining our understanding of the split brain model and deepening our knowledge about the nature of human creativity. There is more integration between the left and right brains than previously thought. Shlain argues that Leonardo was unique in human history for the degree of integration that he showed. He also speculates on whether or not the qualities of Leonardo's brain and his creativity presage the future evolution of man.

Leonardo's Brain integrates art, history, science, medicine, neuroscience, psychology, and philosophy uniting all of the ideas that Leonard Shlain studied and wrote about since the publication of the influential and bestselling Art and Physics in 1991.

By blending modern neuroscience with a historical view of Leonardo Da Vinci, this book provides many thought-provoking insights. All delivered in a truly original and engaging way. Fantastic.

It is quite interesting to learn a lot about human, brain evolution linked with one of the human history genius. Great voice, amazing knowledge

Surprisingly interesting, varied, and enjoyable approach. A little less speculation dressed as fact would have been appreciated. Great read. Recommended even for non-Leonardo admirers.

Learned so much about a man I only really knee as an artist and inventor. The incredible list of his achievements for which he is not recognized was eye opening and shows how amazing he truly was.

As distracted as Da Vinci

I had high hopes as I've enjoyed earlier works by the author and am a fan of the artist. But it just seemed to meander from one idea to another was da Vinci unique? Yes. Was his mind unlike any other? Yes. Did this book offer a clear compelling and strong argument as to why? Far from it.

Fairly good until the last quarter of the book.

I was following the authors meanderings until I hit the authors claim that Leonardo was a remote viewer, or in other words, psychic. When I heard that, how much of the rest of the book is pseudo-science? How much of the history is from reliable sources.

Discounting that claim, the book is good, but mediocre. If I were a psychic believer, I would have given the book 3 stars. The merging of brain science with Leonardo's biography just didn't work all that well. I'd probably would have done better listening to a Leonardo biography or a brain science book.

I was enjoying the book. I really was. Then...remote viewing?!? Are you kidding me? The injection of this mumbo-jumbo into the book called into question the veracity of everything that had come before. Sure, there are more things in heaven and earth, Horatio, than are dreamt of in your philosophy. But as Carl Sagan said, "Extraordinary claims require extraordinary evidence". I was mad. Felt hoodwinked.

The books premise, that there is a substantial difference between the two halves of the brain, is largely outdated. Thus the conclusions are mainly unsubstantiated. Toward the end of the book, the author ventures into supernatural land, arguing that Da Vinci must have had supernatural abilities such as the ability to remote view. It seems to me like the author's model of the world is stuck in the sixties. Much progress in science has been made since that time.

The narrator was fine, not my favorite but does a good job.

Would you ever listen to anything by Leonard Shlain again?

I doubt it. There was a lot of speculation pretending to be fact as well as a great deal of misguided interpretation. His grasp on history and religion is not great. He cherry picks a lot of information about brain science. Overall felt like a clever person with an inch deep knowledge on his subjects.

Have you listened to any of Grover Gardner’s other performances before? How does this one compare?

I was really excited to listen to this book. I enjoyed it initially, but as the book progressed the leaps in logic were just too extreme. I feel sorry for someone who reads this book and does not have a background in anyone of the various areas he addresses, as they might think that he knows what he is talking about.

I don't know just how little of the information in here is worth anything, as the author seems to believe some rather odd things. One odd belief is that remote viewing is an established and widely accepted scientific fact and that Leonardo could thus possibly look through space-time. The author often state's that there's no other explanation for things like Leonardo's descriptions of sand dunes, or the number of houses on Crete. Really? Leonardo couldn't have heard or read accounts of these things? Beyond that the work is rather rambling. Captivating at some points, yes, but is the information presented to be taken seriously? As always Grover Gardner's voice is like butter, so you have that to look forward to, at least.

This is the first time that I'm listening to probably the best narrator in the business, Grover Gardner. His tone and speed of narration is perfectly in tune with my mind.

But the book stands out not because of the narrator. The author jumps back and forth between Leonardo's life and neuropsychology, but at the same time holding you with interest till the very end. Loved it. Must read for anyone scientifically curious about consciousness.

too much pseudo science for my taste

The first 2/3rds of the book is mostly an interesting history of Leonardo Da Vinci and how his innovations were ahead of his time.
I enjoyed this part even though there is no mention of the many sources Da Vinci had implying that his inventions were more original than other sources I have seen. His painting innovations, which I have not read about before, often seem to take a later movement and list one of Da Vinci's making me wonder how anachronistic some of them may be.
My main concern with the book is the last part where the author seems to promote a view that Da Vinci could actually see into the future via remote viewing and that somehow this is supported by a few studies and that he was a left handed homosexual. This is a bit too much of a leap for my belief; I need to try to look up some of the cited studies which I find difficult to believe, but even taken at face value they seem far from the concepts they were supposed to have inspired.