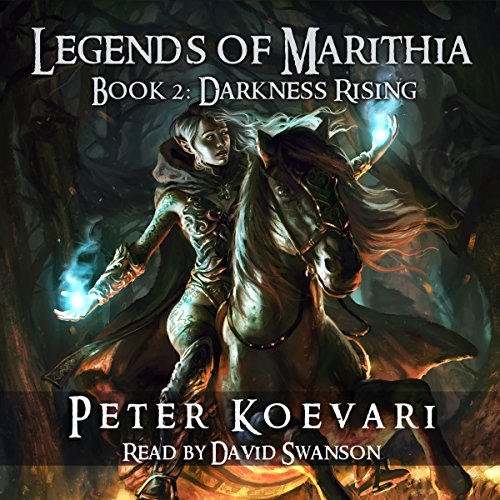 By: Peter Koevari
Narrated by: David Swanson
Try for £0.00

In the aftermath of the Battle of the Elven Woods, the two legends of Marithian prophecy are both dangerously close to death as Marithia suffers under the powers of the Blood Red Moon. Vartan, prophesied to save Marithia, lays spellbound under the protection of the mythical dragons. The vampire sorceress Kassina, prophesied to bring about their Armageddon, has been moved to the underworld by the demon lord himself, Shindar. A seed of the gods has grown and their greatest gift to Marithians, Anakari, makes her fated journey to discover her purpose. A former shining jewel of Marithian peace, castle Greenhaven, remains in ruins after its defeat by Kassina's forces and the elves rebuild their war torn city of Veldrenn. Talonsphere must be found before Marithia merges with the Underworld and Shindar brings about the world's end.

What listeners say about Legends of Marithia, Book 2

Someone who did not read/listen to the first book should be able to pick this title up and be able to catch up fairly quickly. Granted, I realize that one SHOULD read the first book in series before the second, but that's not always feasible. There's so much going on in this book that I as the listener had really no idea what was going on until at least a third way into the book. The author should not assume details are known to the reader. For example, a shocker for me was that throughout 3/4 of the book I thought the main hero Vaarten was a dragon, which turns out he was not. Also put a little more detail into the dragons and their abilities. Are they able to morph between dragon and human form? There were scenes which implied the dragons were in human form.

Would you be willing to try another book from Peter Koevari? Why or why not?

I wouldn't mind picking up the first book in the series to see what I missed, and then move on to the 3rd book. The writing is solid and the overall story is interesting.

Between scenes changes there wee unfortunately no pauses, and there were situations where I had to back up to make sure it was actually a scene change. There should be at least two seconds of room tone between scenes to indicate a scene change.There were also some cases of slurred sentences and a few words were mispronounced. But Mr. Foster did an amazing job given the large number of characters he had to perform. Overall, a solid performance!

Could you see Legends of Marithia, Book 2 being made into a movie or a TV series? Who should the stars be?

This series could easily be made into a multi-season series on Netflix, AMC, or HBO. I think it would translate extremely well into that medium.

Kudos to the Mr. Foster for making Karvin(sp?) the Dragon King sound like Sean Connery! Were there some influences from the movie Dragonheart?This audio book was gifted to me by the narrator at no cost in exchange for an unbiased review via Audiobook Boom. Thank you for allowing me to listen to this, Mr. Foster. It was a very entertaining listen.

This story was interesting. I did not read book 1 but I feel that you can get by without reading the first book. Overall a great book.

I received this book free in return for a unbiased review.