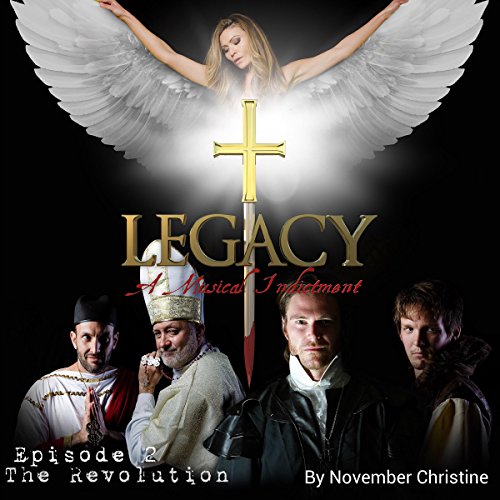 Hip-hop meets history in this four-part musical series about Martin Luther, the Father of the Protestant Reformation. In Episode 2, Martin Luther is at the peak of his popularity with the German people. The Pope and his cronies, however, are hell-bent on taking the wayward priest down. With the help of his nemesis, Johann Von Eck, Martin is lured into a battle of wits at the Leipzig Debate. Though Martin wins the battle, it looks as though he's lost the war when the mouthy monk finds himself on trial before the Pope himself. It will take faith - and a few good friends - to get Martin out of this alive.

What listeners say about Legacy, a Musical Indictment: Episode 2: The Revolution

Fantastic to listen to and breaks away from the norm, making it very exciting. Can't wait for the next one.

This section is where I usually begin with commenting on the story, but OH MY GOODNESS – the opening is fantastic! I wish I knew who to credit with the male vocal, he's amazing! &quot;Through the rise of tides or the mountain high…&quot;

Okay, this is the next installment in the trial of Martin Luther. Again, I cannot speak to the accuracy of the content because I'm not familiar with the historical theology.

I WILL RAVE (as my last review) on the presentation. This is an absolutely incredible &quot;show&quot;, for lack of a better word. I hope that it will catch on and can see this presentation as something that can be used in a classroom. This is meant as a high compliment.I would have retained a lot more history presented this way.

November Christine is a huge talent, from this story/lyric to arrangement and beyond, wow!! 🌠 🌠 🌠

*I was given a copy of this book in exchange for my unbiased review. This performance has piqued my interest in Martin Luther. One of these days I'm going to follow through and read up on him.

If you found my review helpful, please take a moment and select –yes– Immediately below. I also invite you to &quot;follow me&quot; on Audible. Thanks!