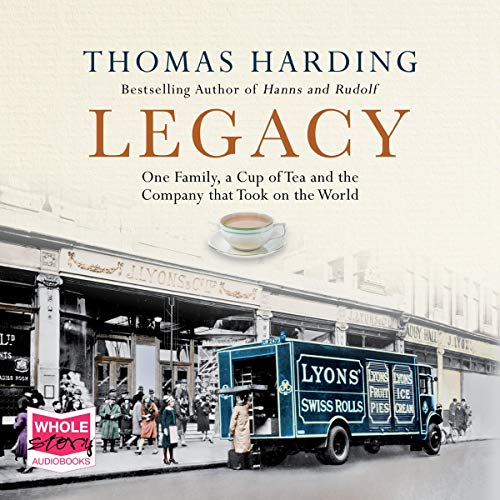 One Family, a Cup of Tea and the Company That Took on the World
By: Thomas Harding
Narrated by: Mark Meadows
Length: 14 hrs and 40 mins
Categories: History, British
5 out of 5 stars 4.8 (13 ratings)

A panoramic new history of modern Britain, as told through the story of one extraordinary family and one groundbreaking company.

In the early 1800s Lehmann Gluckstein and his family escaped the pogroms of Eastern Europe and made their way to Whitechapel in the East End of London. There, starting with nothing, they worked tirelessly to pull themselves out of poverty, creating a small tobacco factory that quickly grew to become the largest catering company in the world: J. Lyons. For over a century, Lyons was everywhere. Its restaurants and corner houses were on every high street, its coffee and tea in every cup, its products in every home. The company transformed the way we eat, drink and are entertained - democratising luxury and globalising our tastes. A story of the virtue of hard work, perseverance and an indomitable spirit in the face of repeated obstacles.

"Endlessly fascinating and hard to put down. I read it all in one sitting, enjoying the colour and grandeur [...] Full of character and characters, this is a tour de force.” (Julia Neuberger)

Brilliant! Gripping! So much information of a time gone by.
We owe this family much credit of what they have done and achieved.
"The Legacy" is aptly named.

Fascinating history of a Family.

A fascinating story from start to finish.
beautifully read. The first 40 years of the story read like an habitory, the heart break of children lost and family members. As the story gathers pace for me the 1870-1920's . Amazing , truly amazing what they achieved and where part of so many historical events. I can't recommend this more.
some many characters. Wish I had a fund.....

"Legacy" covers quite a family. It stretches over at least 3 generations of a most industrious family of Jewish immigrants to Britain, the Glucksteins, the Salmons by marriage, and J Lyons by partnership. The story covers so many years and generations that it is hard to follow via an audiobook. Reading it might be a lot easier because then you can see the generations laid out via the pages. Randomly, the book mentions Jack the Ripper, no doubt due to the fact the family lived in Whitechapel, and other culturally significant incidents. But it is very hard to keep the families, children, children's children, etc straight when listening. But it's quite a colorful story of a very famous family. Mark Meadows's narration is spot on.