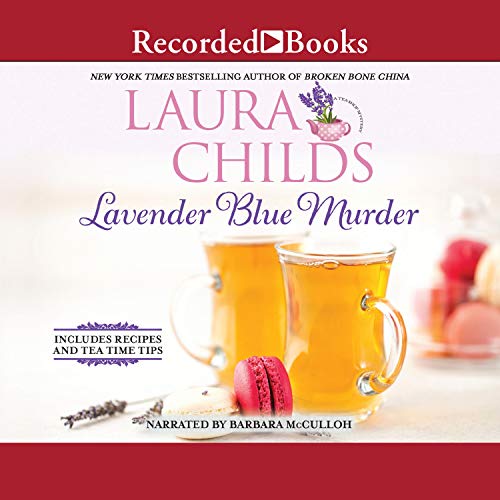 By: Laura Childs
Narrated by: Barbara McCulloh
Try for £0.00

Tea maven Theodosia Browning and her tea sommelier Drayton Conneley are guests at a bird hunt styled in the precise manner of an English shooting party. Which means elevenses (sloe gin fizzes), gun loaders, the drawing of pegs, fine-looking bird dogs, and shooting costumes of tweed, herringbone, and suede.

But as gunshots explode like a riff of Black Cat firecrackers, another shot sounds too close for comfort to Theodosia and Drayton. Intrigued but worried, Theodosia wanders into the neighbor's lavender field where she discovers their host, Reginald Doyle, bleeding to death.

His wife, Meredith, is beside herself with grief and begs Theodosia and Drayton to stay the night. But Theodosia awakens at 2:00 a.m. to find smoke in her room and the house on fire. As the fire department screams in and the investigating sheriff returns, Meredith again pleads with Theodosia for help.

As Theodosia investigates, fingers are pointed, secrets are uncovered, Reginald's daughter-in-law goes missing presumed drowned, and Meredith is determined to find answers via a seance. All the while Theodosia worries if she's made a mistake in inviting a prime suspect to her upscale Lavender Lady Tea.

I love this cozy mystery series that creatively mixes afternoon tea and a murder for a big mystery. This was my first audible, the last 8 were paperbacks. I would crochet my blanket while listening along . While the narration could be better, like including a male voice for those characters, McCullough reads it okay, but I think an experienced actor or actress would give a better performance, and therefore a more enjoyable listening experience. I love her characters, love the recipes, like how you can have them read to you when making them. I am a huge tea lover and have curated quite a collection of loose teas, and always brew a pot or several cups while reading. I think this was a good storyline, fun mystery. and the first ( in 9), where I solved the " whodunit" early in the book. It was fun to listen to the plot develop, but I would have liked it better had Riley been at her house, instead of Drayton, when she chased down Fawn. What I don't like is that she has Theo chasing down a formidable foe, with a 60+ proper gentleman, that does NOT work ; but as as a sidekick Drayton is the best. Since she has several boyfriends across the storylines, there should be an occurrence that involves her boyfriend of the moment, who in this case is Riley, and happens to be a local cop. It would be a nice little plot evolvement, rather than the same "old" heroine . It would be awesome to see one of these on Hallmark Mystery series, since they don't do Hannah Swenson anymore.