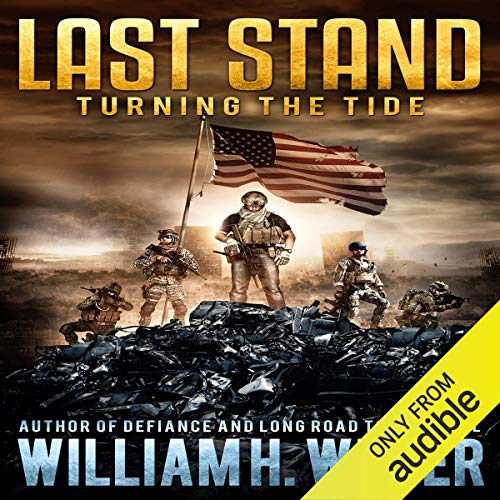 By: William H. Weber
Narrated by: Kevin Stillwell
Try for £0.00

In spite of Oneida's heroic stand against the Chinese steamroller, foreign armies are poised along the foothills of the Appalachian Mountains, preparing for the final assault and America's inevitable defeat. For John, turning back the tide will mean going deep behind enemy lines and organizing the very insurgency he fought so hard against in Iraq. But more than that, it'll mean coming to terms with the brutality of war and the realization that sometimes the deepest scars are the ones that can't be seen.

What listeners say about Last Stand: Turning the Tide

This is a great series that shows the aftereffects of an EMP, America coming under attack, & the incredible will & patriotism of true Americans, willing to fight for their country. God help us all if this ever became a reality. This series will make you appreciate America, your America, oh so much more.

First I am a single mom I work for a living, with that said here goes. This by far has been one of THE best series of books I've read this far. I have LITERALLY laughed out loud, cheered out loud and cries ALOT. The characters I fell in love with. The story is frighteningly believable and all the history!!' WOW! This series I will read again and again!

Yes, but it wouldnt be my first recommendation. I found this series after reading most other very popular EMP scenario stories.

What other book might you compare Last Stand: Turning the Tide to and why?

I would compare this series to the Devil Dog series. While each series is vastly different, they both use an EMP scenario as the primary plot and each book in their respective series has between 5 and 6 hours narration time - whatever that equates to for printed versions. Each book also contains a former military character as its primary character.

There were some touching moments in the series... moments that were very you could envision nearly every Hollywood movie portrayal of victory when Allied troops would celebrate.

This series was fairly interesting. While it was written with the "EMP" scenario in mind, it took a different route of a story that was a bit refreshing. The primary character seems to be a military history nut that greatly helps in with the tactical strategic angles in the story. The ending of this book is written to give a plausible conclusion to this particular story, but it could also be continued. Each of the books in this series are about half as long as most other book in the EMP genre, but it still covers good ground. This series is not my favorite series, probably not one that I will re-listen to, but it was still work the time, not disappointed nor overjoyed with the series either.

terrific characters and hope the author continues these books for years to come. Many arcs in the book to roll up...

I enjoyed all the books in the series. However the ending is wrapped up very quickly.

One of Best end of America listens

Well written , very believable,
Accurate P.T.S.D. struggles
woven into plot.
Hero is flawed -but won't quit
serving Country or his family.
He doesnt whine about killing bad guys. Gritty action w/o f bombs.
Military -weapons tech. spot on.
Twists and turns , Get this book...
I will listen to it again..Rare for me.
2012 Audible Listener...

If you could sum up Last Stand: Turning the Tide in three words, what would they be?

Good story and character development. Loved the action and hard work portrayed to get life back after brutal fighting.

What other book might you compare Last Stand: Turning the Tide to and why?