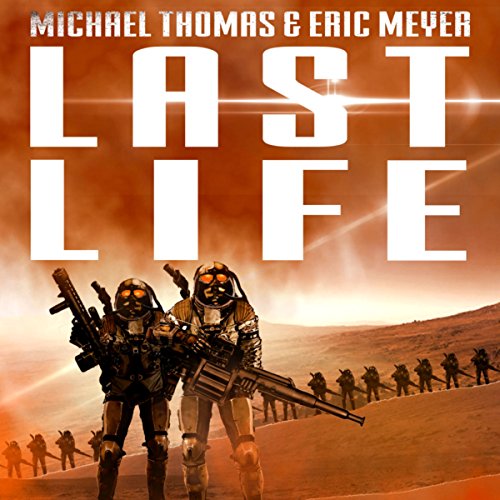 Noah Cage is a cybernetic supersoldier, a war hero and a man on his fifth and final life. He's a Lifer, an enhanced warrior. Repaired, rebuilt and improved after four lifetimes of soldiering. With each death comes further modification and enhancement, although at the loss of yet another piece of his dwindling humanity. Cage is thrust into the debacle of the Third Martian War. One that sees every man in his unit killed, including his best friend Rob Romero. After long years of imprisonment, he returns home to Earth, but it is not what it once was. The planet is slowly decaying after decades of mismanagement and corruption. He wants nothing more than to speak with Rose Romero, the widow of his best friend. Instead, he receives a hostile welcome and quickly falls foul of the law.

It is the beginning of a long, grueling chase that takes him and Rose Romero back to Mars. A planet filled with memories of old battles, and the graveyard of so many soldiers from Earth. Noah finds himself thrust into the middle of a conspiracy between two great powers. Hunted by soldiers from Earth, and by the Martian corporate militias, he is close to the end. Until he encounters the Mars resistance. Men and women who want nothing more than their freedom and the means to exist on the hostile and barren world. It is the beginning of the fightback. Although sometimes, even five lives is not enough.

The reader on this book is bad, had to change the speed to 1,5 because he read so slow !...

worst read book I have bought

story maybe okay but the reader is so bad l can't listen anymore. please do not buy this

the narration was impeccable I liked it a lot, I needed like a few minutes to accustom myself to the narrator but who doesn't with a new one, but the voices were accurate and the pace was good. the story was so strong and well done I really liked that since I have been draw to military warfare lately and this one was so interesting and for me almost plausible and all. my favorite character in voice and personality was noah cage he was so cool and crazy absolutely loved him but damn what a hard bone he is on everyone's jaws. if you like warfare tales this one is the one you should pick up

What disappointed you about Last Life?

I had to rate the story to be able to write this review, and for all I know that does the story a disservice. Unfortunately the narrator's performance was so bad that I could not actually listen to the book.

Who would you have cast as narrator instead of Wesley Bryant?

Good story but narration can be improved

During the wars between Earth and Mars, Earth used super soldiers, called lifers, after dying, they got enhanced thanks to the available technology. But this can only be done four times, and the fifth life is the last one. Noah Cage is in his last life fighting on the Third Martian War, when every man in his unit results killed, and him imprisoned. After some years Noah returns back to Earth with the mission of seeking Rob's wife, and tell her about his husband being killed. But when trying to locate her, he discovers the he is been wanted by the law on Earth.

I enjoyed this story from the start. The characters were interesting and there was a hidden truth that needed to be discovered. The concept of lifer, or enhanced human, reminded me a bit of 'Man Plus' by Frederik Pohl. How they can lose their humanity when seeking a way to improve.

There were just some weak points to the story. Noah and Rose were wanted by the law, but somehow they manage to travel to Mars without being stopped or discovered. With the current security laws we have at airports I imagine that if there is just one airport with flights to Mars the security should be huge, and it would be impossible to travel if the cops are looking for you.

Then the fact that Rose was so adamant about finding out what happened to her husband, and suddenly saying that she was sure he would not be the same, and deciding to go with Noah instead. Rose and Noah fell in love at some point, but we do not see this relationship evolving, and somehow it did not feel real.

There was also quite some Deus ex Machina with repeated situations of Noah getting injured, saved and repaired.

Before beginning this audiobook I was taken aback by its length (over fifteen hours) but when I started listening I realized why. Wesley Bryant narrates very very slow. I usually listen to books at a slight higher speed than normal to be able to keep my attention, but in this case I had to listen at double speed, and at some point it still felt slow. The rhythm was just not consistent, and there were pauses where there should not be. The narration was done in bursts, and kind of singsong like if it was done for children. It took me a while to get used to it but after a while I could follow without being distracted, mainly because the story was interesting and I was invested in the characters. Bryant uses lots of sound effects for voices. It is clearly that this takes an incredible amount of work, but I feel that it is not really necessary. It kind of works to transmit a character's thoughts, or to create different voices, but it fails its purpose when the same effects are used for several main characters. I had troubles to follow sometimes because I did not know who was talking, or where the action was placed, since many characters sounded the same. Female characters had higher pitch voices created by sound processing. Not something I have seen other narrator do, but if subtly done it can help if the narrator is unable to deliver different voices. The most important point though is the reading speed and rhythm. I think Bryan should just try to listen to other narrators' work and analyze what works and what does not. And in addition to being able to express the character's emotions, a good narration rhythm is needed.

It was a good book, with an interesting story, even though the level went down a bit after an very good start.

The narration is terrible. When I started listening, I almost quit and thought about asking for a refund. This narrator has no clue about how to tell a story. He pauses at wrong times and speaks so slowly that I had to speed up the playback to make it bearable. Despite this terrible narration, I decided to tough it out and listen to the entire book because I had some long drives. The story could have been interesting, but was repetitive and predictable. Our hero gets in a bind, is about to be killed, then is saved by some miraculous event. This repeats over and over again. Can't recommend this one, sorry.