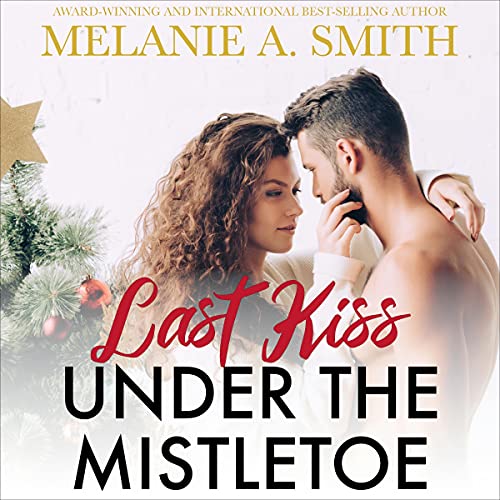 Last Kiss Under the Mistletoe

By: Melanie A. Smith
Narrated by: Rachel Woods,Luke Parker
Try for £0.00

From award-winning and international best-selling author Melanie A. Smith comes a steamy holiday murder-mystery romance with a psychic twist.

Holidays should be filled with cheer....

CJ Roberts just wants to be a normal girl, have a normal job, normal friends, maybe even a normal boyfriend. Unfortunately, she’s about as far from normal as it gets, because she can see the future. And like two sides of a coin, her twin brother, Matt, can see the past. Sounds like a neat party trick, right? Actually, it’s frustrating and sometimes even dangerous. And if the past is any indicator, CJ can’t do much to change what she Sees.

Drew Davies lives and breathes his job as a chef at one of the hottest restaurants in San Francisco. He’s content to focus on his craft, and dating has always been on the back burner. That is, until he meets CJ. When sparks fly, things heat up quickly between them. It’s an unexpected but welcome connection as the holidays approach.

But just as hope blooms, CJ has a vision that changes everything. She doesn’t know how it will happen, but she knows Drew is going to die. Now she’s left with a decision: Does she risk exposing herself to save Drew, or does she play it safe and let fate deal its hand? Secrecy has protected her until now, but can she really do nothing when the life of the man she’s falling for hangs in the balance?

What listeners say about Last Kiss Under the Mistletoe

This is my honest and unbiased review in return for the free audio version of this book.

First I would like to say that this audio book was a complete, and very pleasant surprise.  I think from the title I was expecting a tear jerker but instead I got a thoroughly enjoyable hot romance.  I loved the two narrators – Rachel Woods and Luke Parker -  their voice acting was superb, so hats off to them - and the story was interesting, well written and believable.
if you are a bit of a foody, or have ever worked in a restaurant you will resonate with Drew who, despite his OTT jealousy is a wonderful character. Enjoy!

I loved the dual narration of Rachel Woods and Luke Parker. Both perfect for this great book.

CJ Roberts has a gift, if you can call it that. She is a precog (psychic) and has visions that reveal the future through a touch. Her twin brother, Matt, is also a precog, but his visions are of the past. CJ has a vision of a restaurant that leads her to hold a luncheon for the social media company she and Matt work for, where she notices a hunky chef. Drew Davies is a magician in the kitchen and is immediately taken with CJ. There is a different type of energy around them when they're together and they want more. But CJ has a vision that changes everything. She sees danger in Drew's future, but he's unable or unwilling to believe her. This is an edge of your seat kind of book. It has twists and turns and some intrigue. It's a wonderful story and the characters are believable and multi-faceted. With swoon-worthy moments that will give you "the feels," you'll thoroughly enjoy this well-paced and well-written romance.
The narration was expertly done by Rachel Woods and Luke Parker. Both have a well-modulated and pleasing voice that brings each character to life.

I received a copy of this audible book for an honest review.

This was a hard one to review. I really like the premise of the book and the narration was great. But...there are a few things about the story that really annoyed me...
1. Putting the female in a much lesser job than her brother. Our heroine went to college for biology but didn't want to be a doctor or a researcher so instead she's her twin brother's secretary (he's a Director of a Social Media start up). Hmmm, doctor or secretary... which should I be? She also has precognition... shouldn't she have known where her life would go and studied something else?
2. The hero is a mean chef, compared to Gordan Ramsey. It's cliche and doesn't make him likeable.
3. The hero had an inappropriate prior relationship. In this day and age, a quick review of social media prevents his excuse from being feasible.
4. The hero is emotionally distant and secretive.

This book could have so been much better. I gave the book 4 stars but really consider it a 3.5 star book. Although I was distracted by the above mentioned flaws, I did enjoy listening to the story and would recommend it.

This is one of my favorite books by Ms. Smith by far! It's funny, fast-paced, and her tasteful take on a slightly supernatural premise is so well done that I hope she'll keep writing more and more books in this vein. I loved CJ, she's just utterly relatable, psychic or no, and even though Drew is a dragon in the kitchen he's a softy when it comes to his girl. This book will take you on an emotional rollercoaster, let me tell you! Bring the tissues! The bumps they hit are utterly heart wrenching, but all is well that ends well.

Also, this book will make you HUNGry! LOL Melanie has such a knack for writing about food, I wanted to try all the dishes that were described.

On a side note, I loved the dual narration, the voice actors did a great job embodying all the characters! I give this book ALL the stars!

**I received a free copy for purpose of review, but all opinions are my own.

I am grateful to the author for gifting me this audiobook and am voluntarily leaving this review. Last Kiss Under the Mistletoe is a cute love story primarily about the sister in a brother/sister powerhouse of chronological psychic abilities. I was put off by the frequent grammatical mistakes ("CJ looks between Matt and I," etc., over and over again) and by the constant switching of the female and male narrators (If the scene was from the male's POV, the female's lines were spoken by Rachel, and then the "she said" was said by Luke). Most of the story is recounted in present tense, and while some listeners love this style, it's not my favorite.

I HIGHLY recommend this book! It is sweet, a little crazy, and a great mystery! It may start off a little slow but once I got past the first two chapters and the prologue it picked up and I didn’t want to stop listening.
There are a couple of very hot sex scenes. I would rate this a jalapeño pepper, because it’s a slow burn with hot seeds every once and awhile.
I would recommend this book to anyone who likes a great mystery, and love story.