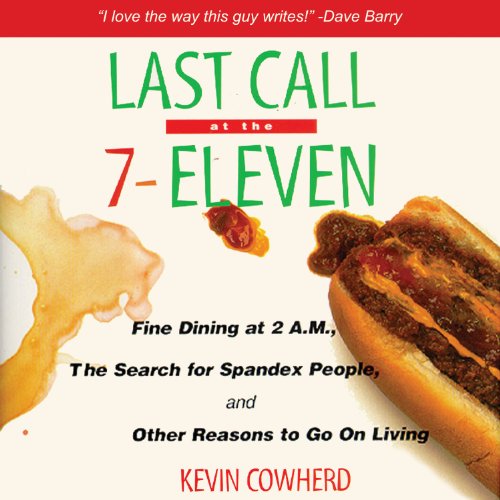 Last Call at the 7-Eleven

Fine Dining at 2 A.M., the Search for Spandex People, and Other Reasons to Go On Living
By: Kevin Cowherd
Narrated by: Gary Roelofs
Length: 6 hrs and 21 mins
Categories: Comedy, Biographies & Memoirs
3 out of 5 stars 3.0 (2 ratings)

Last Call at the 7-Eleven

Kevin Cowherd was a humor columnist and feature writer for the Baltimore Sun. His columns, which have varied from three times a week to once a week to occasional, began in 1987, and were a featured attraction for the LA Times-Washington Post news service. His column appeared in large, small, and in-between circulation newspapers in every part of the U.S. and Canada.

Cowherd lives with his wife and three children in the Baltimore suburbs. In 1990, his humor columns took the top prize for commentary in a prestigious contest: the American Association of Sunday and Feature Editors’ Excellence in Feature Writing Awards.

Last Call at the 7-Eleven, an audiobook of Cowherd’s conversational essays/columns, offers a fresh, inventive comic voice discoursing on the travails of everyday life.

These are humorous American newspaper columns that haven't dated at all

Have you listened to any of Gary Roelofs’s other performances? How does this one compare?

no, but I think that Gary Roelof read the columns in an entertaining manner

These columns are in the vein of the humorist Dave Barry. The columns contain amusing observations about daily life