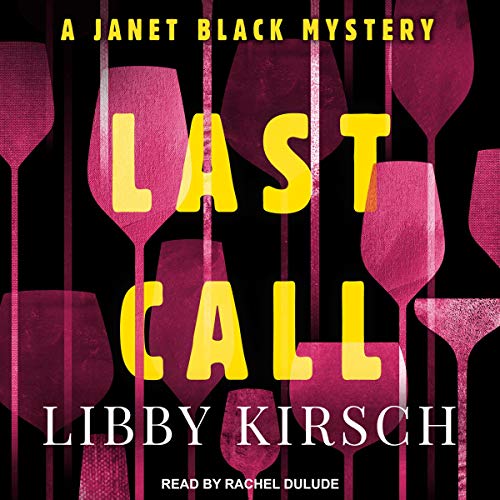 By: Libby Kirsch
Narrated by: Rachel Dulude
Try for £0.00

For fans of Janet Evanovich! Last Call is what you'd get if Stephanie Plum owned a bar and loved to swear.

A dumpster, a body, and a killer on the run.

Unfazed after finding a body behind the dumpster of her bar, Janet Black is ready for business as usual until police start eyeing her boyfriend as the possible killer. When the victim's teetotaling daughter decides to take up residence in the corner booth until the murderer is caught, Janet is forced to get involved.

She'd rather be dealing with unruly customers, but instead, Janet reluctantly mounts her own investigation to find out if the dead man's complicated past could have anything to do with his death, whether an unreliable employee's absence is mere coincidence, and why police are purposefully feeding her bad information about the case.

I really enjoyed this audiobook - the narration was lively and there were plenty of twists. However, I didn't really feel an emotional attachment to any of the characters, so am not really interested in listening to more books in the series.

I really enjoyed this story, and as soon as it ended, I found myself searching for the rest in the series! it took me by surprise in a time when narrator and authors aren't nearly as entertaining as Id like. I will absolutely get my credit back if the book isn't enjoyable and this little mystery is still in my library.

The Last Call is a very good cozy mystery. The mystery is fast paced and entertaining. The characters have just enough flaws to be realistic and likeable. Rachel Dulude does a very good job bringing the story to life. I hope the next book comes out soon.

I was pleasantly surprised at how entertaining this mystery is. The characters are engaging and realistic. The story is well written with a fast pace. I already preordered the next book.

This book was great, but I feel like he narrator didn’t portray emotions as accurately as she could’ve. The storyline was pretty good, and I enjoyed it. I certainly don’t regret buying.