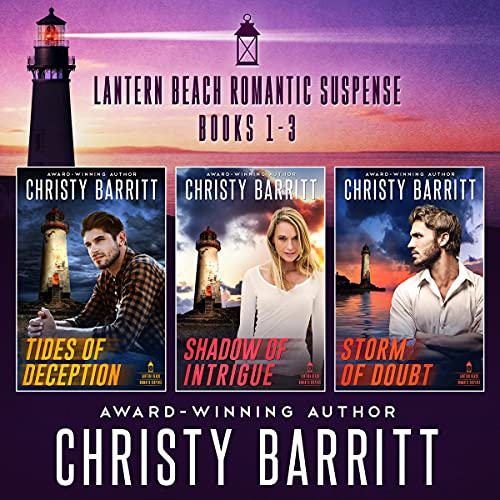 The first three books in the exciting Lantern Beach Romantic Suspense series are now together in one set!

Austin Brooks has loved Skye Lavinia from the moment they met, but the walls she keeps around her seem impenetrable. Skye knows Austin is the best thing to ever happen to her. Yet she also knows that if he learns the truth about her past, he’d be a fool not to run.

A chance encounter brings secrets bubbling to the surface, and danger soon follows. Are the life-threatening events plaguing them really accidents...or is someone trying to send a deadly message?

With the tides on Lantern Beach come deception and lies. One question remains - who will be swept away as the water shifts? And will it bring the end for Austin and Skye, or merely the beginning?

For her entire life, Lisa Garth has felt like a supporting character in the drama of life. The designation never bothered her - until now. Lantern Beach, where she’s settled and runs a popular restaurant, has boarded up for the season. The slower pace leaves her with too much time alone.

Braden Dillinger came to Lantern Beach to try to heal. The former Special Forces officer returned from battle with invisible scars and diminished hope. But his recovery is hampered by the fact that an unknown enemy is trying to kill him.

From the moment Lisa and Braden meet, danger ignites around them, and both are drawn into a web of intrigue that turns their lives upside down. As shadows creep in, will Lisa and Braden be able to shine a light on the peril around them? Or will the encroaching darkness turn their worst nightmares into reality?

Nothing has felt right in Pastor Jack Wilson’s world since his wife died two years ago. He hoped coming to Lantern Beach might help soothe the ragged edges of his soul. Instead, he feels more alone than ever.

Novelist Juliette Grace came to the island to hide away. Though her professional life has never been better, her personal life has imploded. Her husband left her and a stalker’s threats have grown more and more dangerous. When Jack saves Juliette from an attack, he sees the terror in her gaze and knows he must protect her. But when danger strikes again, will Jack be able to keep her safe? Or will the approaching storm prove too strong to withstand?