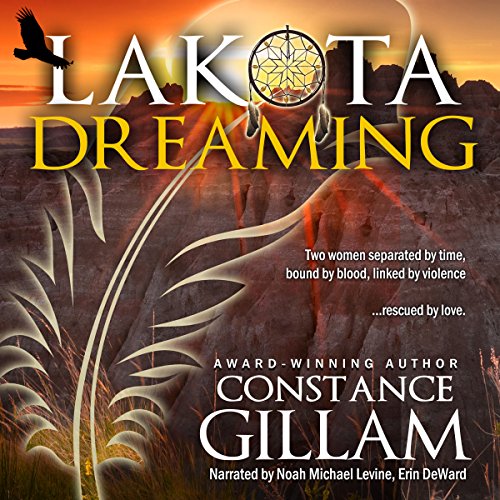 Fired from her job as editor-in-chief of a New York fashion magazine, Zora Hughes travels to a South Dakota Indian reservation. She hopes to find answers to lifelong dreams her psychiatrist calls genetic memories. Zora dreams of a female ancestor who fled life as a slave and was aided in her journey to freedom by a Sioux warrior who would become her husband.

On the reservation, Zora meets Captain John Iron Hawk who aids and sometimes hinders her in her quest to find answers to the murder of her forebearer.

Zora sees the parallel between her life and that of her long dead ancestor's. Try as she might, she can't resist the lure of loving John Iron Hawk, a contemporary Sioux warrior.

But someone will do anything, including murder, to stop Zora from digging up the past.

Let this dream take you along

This is an audio that will make you wonder if we let the mind go and let it roam free will it open to some memories that our soul remembers . The author knows how to keep you listening till the end. I liked how she opens up your mind with this story .
There is more than romance in this audio . There is also a lot of suspense. You will really enjoy this story .

Heroine is Zora . Hero is John Iron Hawk.
Zora lives in NYC but lately she’s getting dreams that are trying to tell her something. Zora takes a chance and follows the feeling her dreams are giving her . She ends up in S Dakota . That is where she meets John Iron Hawk . He’s the chief of police. John doesn’t trust Zora after she tells him her story . Could it be because she’s from the big city . There is someone that shows her the way .
Do Zora dreams mean anything. .
Both Narrators are fantastic. Noah and Eri. Nailed it . They made you think your actually living in the story .

I received this audio part of Audiobook boom. This review is my own and said in my own words

What made the experience of listening to Lakota Dreaming the most enjoyable?

This was my first novel by Constance Gillam, and I enjoyed this story that weaved together Native American and African American characters. A female and a male narrator voiced all the characters in the book, and they did such an excellent job, I often forgot that this wasn't a cast of several different people. The story itself has a lot of tension and suspense, and the narrators capture those scenes flawlessly. I typically listen to audiobooks while I'm in my car , but found myself popping my headset on while doing housework and running errands so that I wouldn't have to wait for the next chapter. Looking forward to reading more from Constance Gillam and hearing these narrators in additional works.

Oh the stories of spirits of old

New York fashion editor, Zora Hughes, has come to the Lakota Sioux reservation in SD to investigate her heritage. She has had these ‘dreams’ all of her life but they have intensified over the past 2 mos. The dreams appear to be that of a runaway African slave that was captured by and later married to the son of the tribal chief. The dreams describe the murder of Julia...150yrs ago. But Zora starts off her quest by annoying the Reservation police chief, John Ironhawk. Throw in the Reservation Shaman and his sniping granddaughter...who believes that Zora is her competition for Chief Irinhawk...and someone taking potshots at the Chief...and you have nonstop action.
Riveting story with great narration and perfect HEA.
I voluntarily accepted a complimentary copy of this book in exchange for an honest review.

I absolutely loved it! The narration was superb and gave the story that extra flair. It will keep you entertained. The author did an excellent job with the character builds and plot. This was my first book by this author but definitely will not be my last. I look forward to reading more of her books. I was given this free review copy audiobook at my request and have voluntarily left this review.

I usually don't read books with overt romantic themes but I found this one very entertaining. I was a bit disappointed in some of the decisions and actions of Zora but managed to enjoy the book anyway.

Can someone please make this a movie? I need to see this book come to life. Why am I just finding about this author? This is the kind of book that makes me a happy reader.

This is one of the best audiobooks I have listened to this year. I was involved in these characters' lives to the point that I wanted to cry at the sorrows that they had to endure and they had endured. Lakota Dreaming was a mystery and a romance. Zora, Sarah, Julia, and some of the other characters had my heart, and when I found out about the mystery involving Julia and Sarah, I wanted to know more. I needed to know what Julia's life was like and why someone wanted to keep her and Sarah a mystery. Zora made me want to shake some sense into her. I wanted to tell her, "WAKE UP! You are not being called to this place just for your ancestors, but your future lies in front of you!" I was pleased with how it ended, and now I'm going to read book 2 because I need to know what happens next in Zora's life.

This was a riveting story with characters brought to vivid life by two outstanding narrators. I was sorry to see the second in the series is not yet available but when it is I will definitely be adding it to my library.