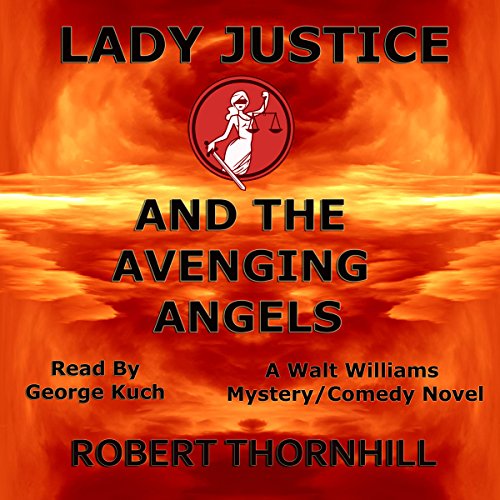 Lady Justice has unwittingly entered a religious war. Who better to fight for her than Walt Williams?

Walt and his sweetie, Maggie, have just returned from a honeymoon that was packed with love, fun, mystery, and danger. Now it's time for them to adjust to living under the same roof - quite the challenge for a couple in their sixties, both of whom have never been married before! Suddenly Maggie's feeding Walt fiber - lots of fiber - taking up almost all the closet space, and even getting rid of Walt's favorite old recliner. But nothing could be better than having Maggie by his side when a great threat arises and Walt is, as usual, smack dab in the middle.

When Walt and his partner, Ox, are patrolling the Gay Pride Parade, a bomb goes off near them. They come out okay, but many are dead or seriously injured. Shortly after, the police squad learns the bombs are homemade by a group of religious fanatics calling themselves God's Avenging Angels. The Avenging Angels believe it's their job to rain fire and brimstone on Kansas City, their Sodom and Gomorrah. The next attacks could be anywhere in the metro, so all cops are needed to comb the city and find the perpetrators. Walt and Ox are on the case, which continues to be explosive.

In this compelling addition to the Lady Justice series, Robert Thornhill brings back all the characters listeners have come to love for more hilarity and higher stakes. You'll laugh, and you'll be on the edge of your seat until the big finish. Don't miss Lady Justice and the Avenging Angels!

I enjoyed this book mainly because I like the characters and you never quite know what the author has in store for them next. This is book four in the series and I have enjoyed all the previous book as well. One of the nice things is you don't need to listen to them in order but for once I am, so it is like catching up with OLD friends. This book was a bit different and only concentrated one two stories until like the previous books, which are made up of lot of cases or incidents that happen during a day in the life of a policeman.
Walt has just come back from his adventurous honeymoon and he wants to quietly ease back into work. It's a shame he is a policeman and its the yearly Gay Pride Parade because that means it is going to be anything but easy or quiet. A religious group have decided to target the parade but as the news reporters keep reporting that is not the only target or attack they have planned. Walt and his team must track down the group before they can set of any more bombs and kill innocent people. Walt is also hoping that in saving his city he won't get a bill he can't pay.
I like the narrator and think he does a good job building up the tension and suspense.

What made the experience of listening to Lady Justice and the Avenging Angels the most enjoyable?

What can I Say. Once again Mr Thornhill has produced an excellent title and a great addition to the series
looking forward to many more

Oh, this is such an enjoyable book and it's hard to stop listening once started. But it is also sheer delight taken in smaller bites.
For anyone coming fresh to this treasure of a series, Walt is a retired realtor who turned cop in his mid sixties. He is a great character in every sense of the word and his friends are equally interesting, from Ox, his partner in the force, to the retired con man, not to mention his trouble making 80 something father plus a tennant who is an unrelenting one liner comedian. And now that Walt is back from his Hawaiian honeymoon and adapting to married life with Maggie, his long time love, the book is again so packed with verbal and visual jokes (told in low key, grumpy-old-man way), that it is surprising that there is time left for the crime story. But there is, and this time it is nasty:- facing down a fanatical murderous religious terrorist movement.

I cannot imagine any way of 'reading' this superbly written book better than that of listening to Walt William's personal reminiscences of his adventures both in and out of the police job, recounted through the voice of narrator, George Much. He brings Walt, with his grumbles, aches, pains and hilarious stories fully to life. It's like having a friend telling tales around the table (even if a few comments are a little too private to be heard in this way).
Throughout it all, Kuch's steady, warm voice is the perfect Walt. In conversations, each character is clearly distinguishable but that hardly seems to matter: it is being Walt with all of his ideosyncracies that is important. And Kuch is Walt.

Lady Justice and the Avenging Angels is the fourth book in the series but completely stand alone. Anyone who has already met Walt will know this book will be unmissable. If you haven't started the series yet, don't wait: get this book and look forward to an exciting, fun and thoughtful book peopled with characters you won't forget.

This 4th installment in the Lady Justice series is another hit by the author. The hilarious antics of Walt Williams and friends as they fight the forces of evil is very entertaining. This story also addresses a very serious and dark topic, of a group of religious fanatics who believe they are doing God's will by killing the sinners in Kansas City. You will laugh at times, and you will be on the edge of your seat in suspense at others. I could not wait for book 5.

67 year old Walt Williams and his 67 year old bride Maggie are back to Kansas City from Hawaii where they were married and honeymooned for three weeks. With neither ever been married before they very quickly learn that some adjustments in their lifestyles will be required; well, Walt is the one who really must adjust. Although there is a mystery element in the last part of the novel, the first half is pure humor.

If you have not heard George Kuch narrate books before you have a treat ahead with this novel. He is really good!

This series is Fantastic!

Another excellent book in the Lady Justice series! Once again, the topics are more than contemporary, and there is referencing to late 20th century events. There is even a speculative tale from the days of the wild west. I continue to be impressed with the treatment of the problems and perils of law enforcement and their departments.
The publisher's blurb gives hints and there is no need for spoilers. Even if you've never read any of the other books in the series, I feel certain that you will appreciate this book and probably obtain some of the others.
George Kuch continues to be the perfect match for this series.
I requested and received a free review copy in audio format in a giveaway.

Excellent addition to the Lady Justice Series. Each book touches on real life tragedies. This one tells of false Profits claiming to seek revenge on God's behalf, striking down sinners. There are many casualties in this book. Sad but this does and is happening in the world today.
Even with all the terror in this book and true to the style of Robert Thornhill you will find laughs. An excellent story and a must for mystery comedy lovers.

As always George Kuch's narration is flawless and excellent.

This is one of my go to book series when I want an easy listening, funny, witty, and just all around great books to read!! Love love love it!!!

My husband and I love this series for road trips

We do not often see eye to eye on a book it is hit and miss, but I love a long day drive no destination needed listening to an audio book. I listened to the first or so of the series, but hubby got hooked on them as well so now for long drives a Lady Justice book goes with us.

This series comes with an amazing cast of characters that we get to know well, learning to know their backstories comes woven into the storyline. So as he is hunting for religious fanatics thay consider themselves Gods vengeance for the sinful ways of big city America, he is helping a tenant discover his family tree. Good wholesome murder and mayhem.

In this book there is a religious fanatic group out to kill all they are sinners and chose sites to detonate bombs to kill in large gathering which Ox and Walt get into many predicaments. Willie finds more interesting facts of his family history and him and Walt again gets into trouble, is a lot of action with suspense as well as funny moments. Recommend this fun series I received this book free from the author, and this is my unbiased opinion. THANK YOU!

This is another great book with some amazing characters. Down to earth retired man who becomes a cop and seems to get himself into trouble a lot aways finds a way out. I loved this story and cannot wait to dive into another with this group.

Full of action... Walt finds himself in the middle of a religious war! This time it may just be a little to much for him to get out of.

Another great book with a fantastic narration. I’m looking forward to checking out the rest of the books in this very entertaining series.

Another fun ride with C.R.A.P