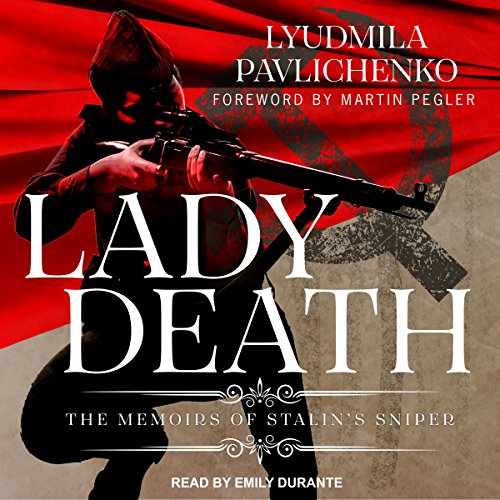 In June 1941, when Hitler launched Operation Barbarossa, Lyudmila Pavlichenko left her university studies and ignored the offer of a position as a nurse to become one of Soviet Russia's 2,000 female snipers. Less than a year later, she had 309 recorded kills, including 29 enemy sniper kills. She was withdrawn from active duty after being injured. She was also regarded as a key heroic figure for the war effort.

She spoke at rallies in Canada and the US, and the folk singer Woody Guthrie wrote a song, "Killed By A Gun", about her exploits. Her US trip included a tour of the White House with FDR. In November 1942, she visited Coventry and accepted donations of £4,516 from Coventry workers to pay for three X-ray units for the Red Army. She also visited a Birmingham factory as part of her fundraising tour. She never returned to combat but trained other snipers. After the war, she finished her education at Kiev University and began a career as a historian. She died on October 10, 1974, at age 58, and was buried in Moscow's Novodevichy Cemetery.

What listeners say about Lady Death

I came in with no real interest in war/snipers/guns but it made everything come alive. Her personality really came through and a sense of how she thought of things.

Absolutely stunning read, it is heroic as it is tragic. There really was nothing like the Eastern Front it was a completely different monster than what the western allies had to deal with. This book dispels a ton of myths surrounding her life, her training, how she enlisted, where she enlisted. Furthermore what sets this memoir apart from so many others is the fact that she is a military-historian and is able to draw insight from her own post- war research which makes her memoirs an absolutely fascinating, well- researched, and well written read. It's super refreshing seeing such an excellent source finally translated into English.

Story of the snipers defeat of the nazis on the eastern front from one of their best.

I struggled very hard to get through this book due to the narrator. her pompous voice and pausing after each word as if they were their own sentence was quite nauseating.

Interesting book with a sub-par nerration

I really enjoyed this book for the most part.You really get a great sense of Lyudmila's perspective on her war experience. She had a really amazing life which is why I wish the narration lived up to her compelling story. I would recomend this book for anyone who is interested in a fresh perspective of the eastern front during WWII.

An absolutely amazing woman with deadly skills.
After listening to this I researched more about her and she was a true hero for Russia.

Amazing book Russian women are definitely some of the strongest in the world. She did so much and always fought for her country. I really wish I got to meet her. That would have been a honor.

One of the most amazing stories

This is one of the most amazing stories regardless of historical context, and even more amazing with the context. What she has been through and the modesty of the presentation is difficult to reiterate. I cannot recommend this enough to anyone.

I truly enjoy the book. Learned a lot about snipers. Also the life of the Russians during World War 2. I would recommend this book to anyone. Great read.