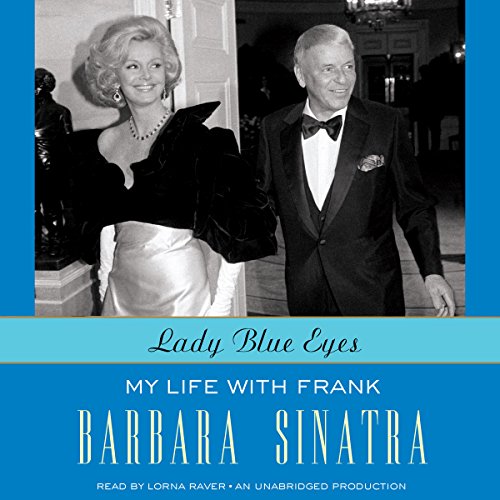 Thirty years after she first heard his voice singing on the jukebox at her local drive-in, Barbara Ann Blakely heard Frank Sinatra take the wedding vows that began his fourth, final, and most enduring marriage.

In Lady Blue Eyes, Barbara Sinatra's first public love letter to the husband she adored, she celebrates the sensational singer, possessive mate, sexy heartthrob, and devoted friend that she found in Frank. For more than two decades, Barbara was always by his side, traveling the globe and hosting glittering events for their famous friends, including presidents, kings, queens, Hollywood royalty, and musical legends. Among them were Sammy Davis, Jr., Princess Grace of Monaco, Bob Dylan, and Ronald Reagan. Each night, as Frank publicly wooed his bride with love songs from a concert stage, she'd fall in love with him all over again.

From her own humble beginnings in a small town in Missouri to her time as a fashion model and her marriage to Zeppo Marx, Barbara Sinatra reveals a life lived with passion, conviction, and grace. A founder of the Miss Universe pageant and a onetime Vegas showgirl, she raised her only son almost single-handedly in often dire circumstances until, after five years of tempestuous courtship, she and Frank committed to each other wholeheartedly. In stories that leap off the page, she takes us behind the scenes of her iconic husband's legendary career and paints an intimate portrait of a man who was variously generous, jealous, witty, and wicked. Coupled with revealing insights about many of Frank's celebrated songs, this is much more than the story of a showbiz marriage.

It is a story of passion and of a deep and lifelong love.

Frank was a smart guy, loathed his own company, surrounded himself with amusements and knew his limitations. Barbara comes across as greedy, self seeking and calculating. As Frank drew toward old age, they appear to have met in the middle and I cant fault her devotion in his final stages. Very slow starting, too much of her early life, many missed opportunities to entertain us and delight with insights into great people. Lots of names, superficial stories. Franks children are noticeable by their absence. This book creates more questions than it answers. Barbara remembers every compliment and gift and conveniently forgets every insult or detail of an argument. A glimpse into Frank's life through a dense filter!

Show \business Gossip at his best

Loved this book, great insight to the life of frank Sinatra by his wife of 22 years . Some fabulous stories. Listened to it many times

Barbara Sinatra Tells Her Side of the Story

Yes I would. Surprisingly this book comes off as a sincere account of the final relationship and later life of Frank Sinatra and his wife. Certainly it is a little self serving in its tone, but with the negative feeling one has always felt about the motivations of Frank Sinatra's last wife, it sheds a truthful and candid light on her character, and the devotion that Frank had for her. Many of the reviews talk about the fact that she only briefly mentions Frank's children is not surprising once you listen to this book. If you take into consideration at all the publicity his children get, and her general silence in the past, there was a disproportionate representation of their side of the story. Barbara goes into depth about her son, someone who we know very little about. You will feel that this book is evening the playing field so that our picture is more complete about the dynamic that their blended family lived with. Coming from a blended family of two successful people who were in their second and third marriages myself, everything that Barbara said about their family sounds very familiar. Most of the issues she encountered, I experienced as well.

For the first time I saw Frank Sinatra from the prospective of someone who truly loved him. She does not sugar coat his personality or their relationship. All his good, and not so good attributes, are represented here. However bright his good parts are, and dark his band parts, she explains them with the love of someone who understands him and loves him unconditionally. After reading this you understand that to be with Frank Sinatra, you had to accept all of him, good and bad in one totality. But yet, the sum of your relationship with him is in the positive column, if you do accept him without any reservation. She makes it clear the people who do. And also what happens to the people who don't.

The narrator, whether or not it is a fact, sounds as though she is in her 70's. I got the feeling that her voice sounds like a grandmother telling the story. (Think Katherine Hepburn in On Golden Pond). A lot of the emotional punctuation of the story is presented through the inflection of a very old person. I would doubt that Barbara Sinatra;s voice would sound this old if she read it herself. If she is the life loving person she portrays herself, I would believe her own rendition would be preferable.

After we progress through the years where Barbara states that their relationship deepens and grows, it is very sad when she knows she is loosing him to age. There is a sad inevitability that is emotional charged, and quite touching considering the impact that he had on her life.

Barbara Sinatra is not a name dropper. She lived in a world of celebrities, even before she was married to one of the most famous people in American history. To not mention the people that shaped the world around her, those that she met along the way, would be ludicrous. It is a faithful account of her story and the people that made up the tapestry of her life.

Barbara Sinatra tells her funny, heartwarming story of life with Zeppo Marx, Frank Sinatra and many other movie stars who were friends in their crowd. She tells about Judy Garland, Kirk Douglas, Prince Rainier, Princess Grace and others. She knew how to navigate life married to an entitled rich person namely Frank Sinatra, knowing what to do when they showed up for a dinner party in his honor and he decided not to go at the last minute. It makes for an interesting story, one that keeps the listener hooked to the very last chapter. The narration is excellent.

I highly recommend "Lady Blue Eyes" as it kept me mesmerized hour after hour. Great anedotes about all the Hollywood celebs and pals, the antics of Sinatra and the deep love he had for Barbara. Lorna Raver did an outstanding job of narrating and there was never a dull moment. I have the greatest urge to play my entire Sinatra Reprise Collection on my iPod tonight.

Barbara Sinatra truly had a fascinating life and she recalls it so vividly. After reading the first chapter, I think you will be hooked.

thank you Barbara for this gift of sharing that we might see through this beautifully written window this man with a heart of gold,very inspiring

If for any other reason you need to listen to this book to see how great the life was in this country and to realize men and women like this are fewer and farther between. It is amazing the connections of all the great people.

The love that Frank had for Barbara.

If this book does not retain your interest, you are sleeping or have no heart and soul.