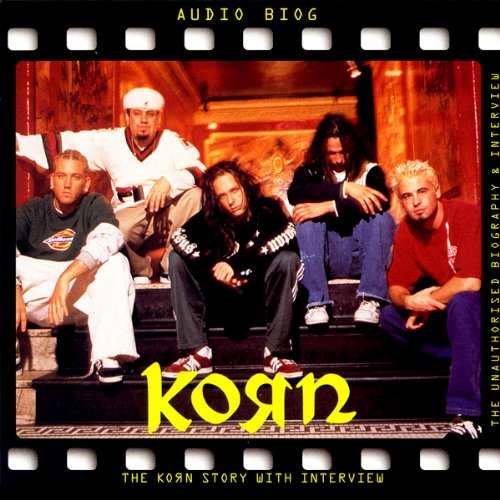 This episode of Joe Jacks’ and Pete Bruns’ Rockview Audiobiography focuses on the band Korn (with backwards "R", of course). Jacks intersperses information about Korn’s history and discography with casual interviews with the musicians themselves. A classic riff from the band plays in the background throughout the audiobook. Recorded by passionate music fans, directed at passionate music fans, and partly narrated by the musicians themselves, this "audiobiography" expands a listener’s understanding of a band whose sound is arguably unclassifiable. Whether its music is heavy metal, nu metal, or mainstream rock, Korn will deepen a fan's understanding of its work through this recording.

Hardcore rock band Korn formed in 1993 when two bands combined: Sexart and LAPD. Jonathan Davies was lead singer with Sexart, whilst also working as an assistant coroner in the Korn County (California) Coroners Department, and James Schaffer, Reginald Arvizu, Brian Welch, and David Silveria were part of LAPD. Korn's alternative funk - metal sound has positioned the group as one of the most exciting, popular, and provocative bands to emerge during the post-grunge era.

This is not an authorised artist, record, or management music release, but an exclusive and unique Korn Audiobiog.

Korn's relentless scheduling of tours, opening for artists such as Marilyn Manson and Ozzy Osbourne, resulted in their debut album going gold, together with the creation of a loyal fan base. Sure to shock and be controversial, this is a must for the fan and collector.

What listeners say about Korn: A Rockview Audiobiography

what was I thinking?

I love Korn & really wanted to hear the story but couldn’t listen all the way thru due to the narration. The live sequences where the band members talk is like they are recorded in a tunnel . I was constantly turning up the volume then quickly turn it back down when the narrator spoke.

.. Do you have the time..
To listen to me whine? 🤣
I fully enjoyed this story, it really does tie alot together for the band and the beginning steps of their journey.
I could relate to alot of the situation.
It did help push me forward into universal understanding.
Thank you Korn!
💋❤🤍🖤🔮🪄🧸🎭🎨🀄🎖🧧🎐🎀🎃🎄🌬
Love Always Nikki💛 - Purplly Mosh Cake Drippin! 🤘

I wish I could hear

impossible to understand too much feedback to hear no clue what is going on. also a lot of background noise