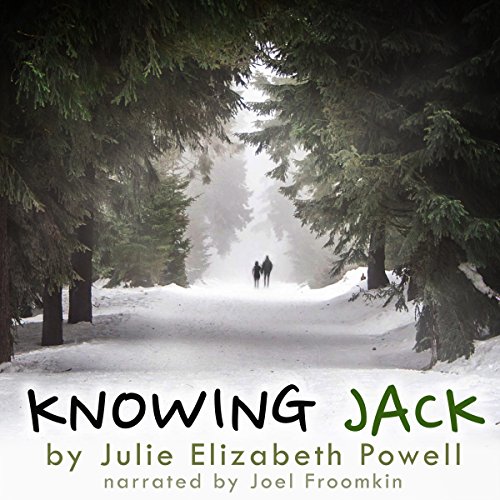 Twelve-year-old Jack knows they shouldn't go but is unable to persuade his parents not to take the planned trip to the Lake District. Something was going to happen, but what?

The weird feelings he had were always so fuzzy and they didn't always make sense. Maybe it was just because he'd have to spend time with his pampered cousin, Rosie? Anyway, it was nearly Christmas and what could go wrong with just staying in some cabin in the woods?

He was being stupid...all he had to do was ignore the way his belly churned and his head pounded.

What listeners say about Knowing Jack

This book was really enjoyable... Great for kids around the 8-10 mark I would think. Preteens I think would find the characters engaging and the narration exciting. The story is about a young boy named Jack who finds himself paired in a survival adventure with a spoiled rotten cousin named Rosie that he can't stand. The book reminded me very much of those great kids adventure movies that Disney used to make... like Escape from Witch Mountain. It has that young-hero in the wilderness feel that also reminded me of My Side of the Mountain. If you think your kids would enjoy a modern spin on the Kidnapped or Treasure Island kind of adventure - I think this would be a big hit. The narration is lively with lots of humor and, even though moots the book is dialogue between two kids, it holds your attention really well.

What a gripping read! I was engaged from the opening pages. The characters were well-built and believable, the pace quick, and there were a few surprises. I enjoyed watching how Jack and Rosie, who started out as adversaries, became allies and then friends. Definitely left me wanting to hear more about Jack's knowing powers. The narrator did a great job voicing each of the characters and bringing them to life. Recommended for anyone looking for a suspense-filled,fast-paced mystery.

12 year old Jack is reluctant to go on a family trip to the cabin in The Lake District. He is also not thrilled with his Obnoxious cousin Rosie coming along. He just can't fight the feeling that something bad is about to happen. He does voice his opinions to his parents who shrug him off as being too dramatic.Soon Jack and Rosie find out exactly what is in those woods, and find those fears of his just might be real.

Fantastic thriller, for readers of all ages. Past paced, full of tension and suspense.

Next Time You Hit the Road, Listen to Jack

Knowing Jack by Julie Elizabeth Powell, narrated by Joel Froomkin is an absolutely adorable mystery with a twist for kids and adults. Jack, his parents, aunt, uncle and younger cousin Rosie make a trek to the Lake District for the Christmas holiday. What could possibly happen at a secluded cabin in the woods?

Ms Powell does a fabulous job with character development, attitudes, setting and emotionally firing up the reader. I started snickering before Jack and his parents left for the cabin and oh my Rosie’s character brought back memories of outings with the cousins. I let my phone go directly to messaging at least three times during the book because I did not want to turn it off.

Joel Froomkin did a great job with the character attitudes and sarcasm. His female voices are a bit annoying, but are probably absolutely right for this book.

Thank you so very much for allowing me to review this wonderful book. I do hope Jack has more adventures in the future.

This is a great adventure thriller for the pre-teens and above age groups. It is fast paced and easily keeps your attention. The story is set in England's Lake District and revolves around 12 year old Jack who's presence both gets him into trouble and also saves him. The narrator of the audiobook fits the story well and brings the story and characters to life. This exciting tale quickly draws you in and keeps you entertained with both the interaction between the two cousins, Jack's "knowing" and the tense, suspenseful action. I received the audiobook at no cost and under no obligation.

Jack sees the future, and its a bit bleak.

Jack is a boy who seems to have a sixth sense. His father treats it like a mild personal superstition. This weekend’s trip to a friend’s cabin in the woods has just set him off. Is it his annoying cousin, Rosy? Could it be the winter storm? Find out for yourself. Seriously, I enjoyed this fast all ages read.

Powell, whose work I adore in the realm of high fantasy, has impressed me with only a few easy dashes of the speculative. If fantasy books were deserts, a story Knowing Jack would be in the lemon bar family. The dessert struck me as follows- Hmm. Lemons… but there is powdered sugar on top. Then you try it and it is a little sweet, but rich beyond your wildest imagination in buttery wonder.

The chase and adventure had danger, survival, suspense, and an unlikely bond formed between two characters.

I received a free audible code in exchange for a review. Any review. That fact that it’s a good one is because the book is good. Which has nothing to do with how awesome I am. You’ll have to find that out for yourself @S_Shane_Thomas on Twitter.

I’d recommend this book to anyone on summer break, looking for a good adventure while stuck in the back of a car on a hot day. It’s set in the winter, so it’s refreshing.

Fear man, not the bears!

Jack, who is 12, and his parents are planning a trip to the Lake District (Britain) for the holidays. They plan to share a cabin in the woods with Jack’s aunt, uncle, and their daughter Rosie. However, Jack has that feeling, that headache and nausea that tells him something bad will happen. He doesn’t want to go but can’t give his parents a solid reason. His dad is willing to listen to him, but his mother isn’t likely to.

The inevitable can’t be put off and they head out to the cabin but have to stop at a local convenience store/post office to pick up the keys. There, Jack sees a girl with a grumpy man and his concern increases. After settling in at the cabin, the group splits up to head out for various activities. Rosie’s dad plans to go for a climb while the ladies plan a shopping trip. Rosie doesn’t want to do either, so Jack and his dad are saddled with her. Driving out to a place where they can take photos, they are sideswiped and forced off the road by the grumpy guy (who we come to know as Eddie) from the PO. Jack and Rosie are forced to flee. And so starts the action-packed part of the book after a delicious build up.

Rosie complains loudly for most of the book, though she does have a few moments where she rises to the occasion, finally realizing that if she keeps arguing with Jack they will be caught and most likely killed. Jack’s ESP (or whatever power it is) keeps warning him when danger draws near but he doesn’t have it fine tuned, so Bad Stuff still happens. I liked that it wasn’t a power that could solve everything, and in fact, was sometimes a hindrance.

Most of the female characters come off as whiny asses of one variety or another, and that was a little tiring. Jack’s mom came off as rather self-centered and annoying, though she did have some comedic lines. I like that Rosie eventually saw the larger picture and started trying to keep up instead of hindering the escape at every turn.

As Jack and Rosie flee in to the wilderness, trying to find their way to the cabin, they come across some unexpected bits and bobs. Some are good, some are scary, some are useful. A cat and mouse game ensues as Jack tries to keep them alive and Rosie whines she is hungry. It was a fun, fast paced story. Also, I want to note that I didn’t realize there were no longer any bears running wild in the UK prior to reading this book. So, hey, educational as well as entertaining!

I won a copy of this audiobook from the author with no strings attached.

Narration: Joel Froomkin had great little kid voices and various UK accents. Each character was distinct and the female voices were believable.