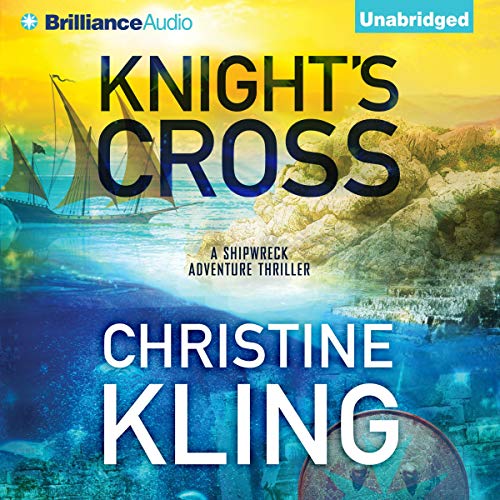 By: Christine Kling
Narrated by: Angela Dawe
Try for £0.00

Shipwreck hunters Maggie Riley and Cole Thatcher are no strangers to the mysteries hidden beneath the seas. They've uncovered artifacts with secrets that powerful interests would do anything to control - and they're about to do it again.

As the newly engaged couple prepares to set sail, Cole suspects they are being followed. While he tries to unravel a coded message that hints at a treasure jealously guarded by an ancient society, a bomb is discovered on the couple's yacht. Now it appears that Cole's belief isn't mere paranoia - and that the cipher holds information others will kill for.

From a sunken submarine off the coast of Tunisia to the hallowed halls of the Vatican, can Riley and Cole outrun a ghost and save a manuscript that could rock the foundations of history?

What listeners say about Knight's Cross

The narrator did an excellent job with each character. The book itself was pretty good. It's probably better if you read the entire series though. I think having the back story on each character would have helped, but as a stand-alone book it was still good.

good read or listen. if you like twist in your sto

I hesitantly started this book using the Angela Dawe narration. It was a good read and I quickly "sailed" through the chapters. I can only say that the first book of the series, Circle of Bones, must have been an outlier for the narrator as she was horrible and destroyed my listening pleasure. The second book, Dragon's Triangle, I used Kindle Unlimited and the text-to-speech was better than her narration. But all was saved by this book -- truely enjoyable. Christine Kling can spin a good yarn.

Angela really nails the authors dialogue!!!
This story extends our adventurous teams philosophy. However to enjoy this author’s talent it’s best to start with #1 or 2,3 will seem too tame. This author loves to sail and has our heroine being smart strong and resourceful! Author has adventure in her heart and can spin a fun tale.
Arcella’s love story broke my heart and it stays with you.
Hope #4 comes w Angela reading it. I have owned these 3 books since 2014 and just got to the best story in book #1!!! You will want #2,3. Get these 2 on sale
Were my comments helpful?

Meh... Not bad but unexceptional story.

Angela Dawe is a great narrator but she really butchered many of the nautical pronunciations.

Awful. Narration Totally he said she said to you get could get crazy really very very annoying

Easy to lose narrative with constant
Back & forth he said she said . I really disliked this book.

No - she spoke so fast I could hardly follow the great story!

Difficult to listen to the rapid speech !!