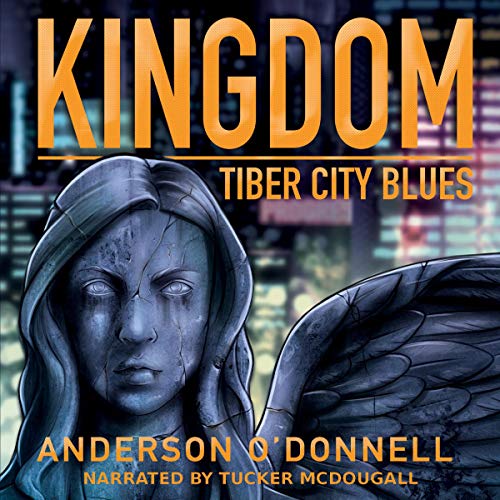 In a secret laboratory hidden under the desert, a covert bioengineering project - codename "Exodus" - has discovered the gene responsible for the human soul. Somewhere in the neon sprawl outside the nation's collapsing economic core, a group of renegade monks are on the verge of uncovering a secret that has eluded mankind for centuries.

In a glittering tower high above the urban decay, an ascendant U.S. Senator is found dead - an apparent, yet inexplicable, suicide. And in the streets below, a young couple races through an ultra-modern metropolis on the verge of a violent revolution...closing in on the terrible truth behind Exodus - and one man’s dark vision for the future of mankind.

“A taut, brilliantly conceived thriller with impeccable pacing bursting with ideas... For fans of noir-laden science fiction in the vein of Philip K. Dick that is in equal measures suspenseful, gripping, darkly funny and philosophically challenging." (Kirkus Reviews)

"There simply aren’t enough stars to communicate the impressiveness of O’Donnell’s work here. He has taken religion, science, politics, theory and philosophy and blended them all together to create what is easily one of the most important books to come out this year.” (Pavarti K. Tyler, Fighting Monkey Press)

What listeners say about Kingdom

Just Because You Can...

It's one of the running motifs in this dark world of what could easily happen with the melding of science, greed and a lust for power. It's a blend of family struggles, the past, the future and how to grapple with ideas just out of reach. Tucketr's narration brilliantly matched the characters' motivations and fear and made O'Donnell's work pop. We experience the anguish from Tucker, the rage of his father and the desolation of the world they live in. Hope is there but you do have to dredge through the pain of enhanced techniques and mental meanderings. It's a good read/listen and very faced paced from the get go.

Campbell decides to leave the horrors of the secret genetics laboratory where he works behind to start an anonymous new life and to try to get redemption for the horrors he helped to perpetrate. Morrison, his younger colleague, is decided to make Cambell come back, while Meghan, Morrison’s daughter goes in search of Dylan Fitzgerald, the son of a senator who inexplicably committed suicide. Meghan has stolen some important papers from his father that may tell a lot about Dylan and his defunct father. This is a noir sci-fi tale, clearly inspired by Phillip K. Dick and William Gibson, without being fully cyberpunk, but transmitting the same feeling of a decaying society that is already beyond salvation. O’Donnell was able to create a unique atmosphere with detailed and profuse descriptions so elaborated that I was almost able to test the grim air of Tiber city. This rich language was one of the best parts of the story, but it was also its bane. It distracted me from what the story was really about. The intrigue had a slow and long buildup in which I was tantalized at the beautiful language and descriptions. I got hooked because I wanted to know what was the deal with Dylan, his father, and Morrison; but after several times that we almost get some information but don’t, I was getting desperate. At last, we get the truth, but it felt somehow anticlimactic, just too mystical for me. I like the hard facts and I also enjoy going into a character’s psyche, but mysticism and genetics are two things that shouldn’t be mixed in my opinion. I have another small complaint about the language used in the book. It was rich, descriptive, but the constant personification of objects bothered me to no end. Examples of this are “broken lights observing the caravan’s progress like angels on high” or “drone silent yet omniscient”. This was a constant throughout the book. I may pass a couple of them, but they were one after the other, and that, coupled to the many times that we almost got information but didn’t, made me a bit impatient and I was losing interest towards the end of the book. Tucker McDougall delivered a narration that matched the writing style well. It sounded a bit like a declamation and felt a bit forced, but it went well with the intricate writing style. I usually prefer more natural narrations, but it was decent, the character interpretations were quite good. There was a bit more reverberation than usual, but not to the point that it was disturbing. I would recommend this book if you are into cyberpunk and do not mind a bit of mysticism. If you are into elaborate writing style and detailed descriptions and abundant use of personification, this book might be for you. It was not my cup of tea, though. It made big promises but it did not deliver. I received this book for free in exchange for an honest review. This does not affect my opinion of the book or the content of my review.

Kingdom. I received a free copy of this audio book at my own request and voluntarily leave this honest review. . An interesting storyline that keeps you listening. Not my favorite book this year but it is entertaining. A complex plot that is sometimes a little difficult to follow.

This book was just OK in my opinion. I simply didn't find myself caring about the characters or what happened. Not sure I can point to any failing of the author or narrator, just wasn't for me. I received a copy of this book at my request in exchange for a fair review.

Overall I found the book engaging. It has a hero (he’s a bit 2-D) a girl (who rescues him, refreshingly!), a villain and ... well a not so bad bad guy. It’s pretty graphic at times - both sex and violence. It is so fast paced that it is a bit disjointed. It also jumps around in time... which is ok at first Ben then it somehow jumps ahead about 6-12 months... and I missed when that happened. Likely when they were torturing people and it was a bit too graphic for me. The world was also a bit confusing. It was clearly dystopian, but it was too easy to simply picture today, only to be forced out of today suddenly. NB: I received this book for free in exchange for the review.