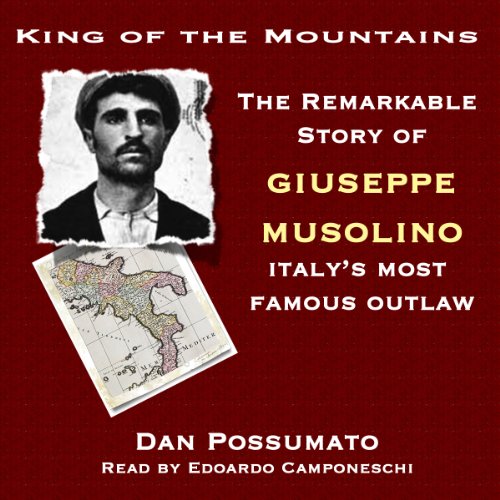 King of the Mountains

By: Dan Possumato
Narrated by: Edoardo Camponeschi
Try for £0.00

In 1897 the young Italian peasant Giuseppe Musolino was falsely convicted of a crime and sentenced to 21 years at hard labor. He soon escaped, and began hunting those who had played a role in his false conviction, extracting an ominous and lethal revenge, killing as many as 25 people.

For three years he eluded a massive manhunt conducted by hundreds of police and even a full regiment of the Italian army. He soon became a hero to the common people of southern Italy, who risked imprisonment themselves to hide, protect, and sustain him.

When he was finally captured his trial had to be moved to a location 600 miles north because the government believed no jury in the south would convict him. At the time of the trial The New York Times wrote that he was "the most remarkable being that has ever stood behind the bars of Italian justice." This is the first and only audiobook in English to report the incredible story of Italy's famous Il Brigante.

What listeners say about King of the Mountains

Would you listen to King of the Mountains again? Why?

Yes. This story of the outlaw Giseppe Musolino is facinating. Can he truly be likened to a Robin Hood character, or was he essentially a criminal. Musolino's young life is not without disapprobation, However, his resentment for perceived injustices feel genuine here. Conjecture the extent of injustices suffered by him, and the true character of this popular rogue.

What was one of the most memorable moments of King of the Mountains?

His escape from prison and survival in the mountains evading recapture. Unfortunately, this is relatively short lived given the length of time spent incarcerated.

I have given the highest overall score as is a true story and very enjoyable.

The content and delivery have been marked down a star as Musolinos's escapades end suddenly in the middle of the story, when he returns to jail. The remainder of the narrative bullet points and explains facts.