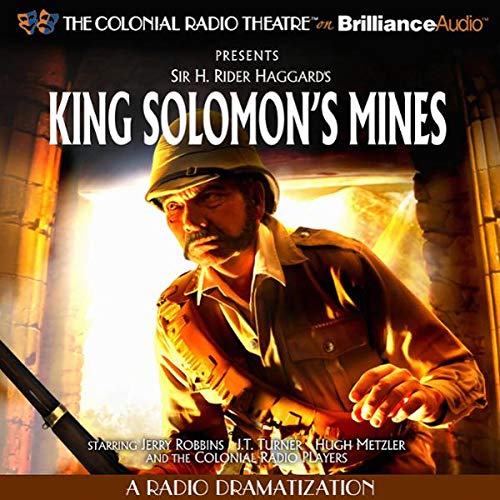 Allan Quatermain, a professional big game hunter, is approached by English aristocrat Sir Henry Curtis and his friend, Captain John Good, late of the Royal Navy. They need his help finding Sir Henry's brother, who was last seen traveling north into the unexplored interior in search of the fabled King Solomon's Mines. On their perilous journey, they encounter such characters as the evil witch-woman, Gagool, and the terrifying King Twala and his mighty army. The award winning Colonial Radio Theatre on the Air brings this classic tale to life with a full cast, music score, and thousands of sound effects.

A great story and a good cast make this a good listen. I enjoyed it.

Diamonds...some the size of a turkey egg...

A brilliant adaptation of Haggard's timeless classic by Jerry Robbins and the Colonial Radio Theater. Follow's the book and great fun for the entire family. And arguably the best expression of this story available, highly recommended!

This was my first experience with a dramatization of a literary classic. The sound effects were first rate! I have never read this book, but I think it would have helped to understand what was happening. I look forward to listening to more from these talented performers!

This story is a timeless adventure story. Colonial Radio Theater is tru to H Rider Haggard's story-no romantic female but a lot of action and excitment. CRT picks the best literature to dramatize!

I loved this performance. It was a wonderful story with very rich, vibrant imagery.