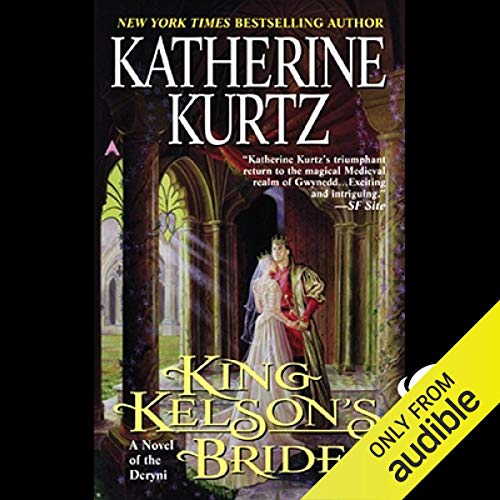 By: Katherine Kurtz
Narrated by: Nick Sullivan
Try for £0.00

Speculation runs rampant throughout the kingdom of Gwynedd as to when, and to whom, King Kelson will finally be wed. As a rival monarch takes his place on the throne of a nearby land, it becomes more imperative than ever that Kelson produce a long-awaited heir.

Friends and enemies alike have a candidate for queen. Some put forth their ideas with passion; some with cold calculation. But while his councilors are busy trotting out potential possibilities, Kelson's heart is heavy. Two women have already been taken from his grasp - one by death and one by duplicity. Now, he must choose with his head, not his heart, for he is wed to his beloved Gwynedd by oaths far more binding than any marriage vows.

With the mystical Deryni blood flowing through his veins, Kelson can only hope for a woman whose power and conviction are equal to his own. Love is set aside for duty - and Kelson the king must make the choice that Kelson the man cannot.

"Kurtz's strengths lie in her patient accumulation of telling detail, well-articulated plots, and believable magics. Should bring the fans flocking, and attract newcomers too." ( Kirkus Reviews)

Better than I imagined

This tied up a few loose ends yet created a few more. I just loved this and all her books. Hope to see more in the future.

Katherine Kurtz published Deryni Rising, her first novel about young King Kelson, in 1970 and published The Quest for Saint Camber, which seemed to be the final story in the HISTORIES OF KING KELSON in 1986. Then, eleven years later, she published King Kelson’s Bride, a story that ties up many loose ends and answers a few questions about how life turned out for Kelson Haldane. There will be spoilers for the previous books here, so you may want to skip this review until you’ve read up to this point.

King Kelson’s Bride begins about three years after the events of The Quest for Saint Camber. There are two major events going on in Kelson’s life right now and they will become intricately intertwined in this story.

The first is that it’s now time for Liam, the prince of one of Kelson’s vassal states, to return home after serving as a squire to Kelson’s uncle Nigel for the past several years. Initially Liam was something of a royal hostage, but Kelson figured that befriending Liam and allowing him to serve as a squire would teach Liam their ways and would help unite their kingdoms when Liam returned home to rule. When Kelson and his entourage escort Liam home and prepare to attend his coronation ceremony, they discover that treachery is afoot. The uncle who has been acting as regent for Liam doesn’t want to give up the throne.

Meanwhile, Kelson is being pressured to choose a wife so that he can secure his own throne with an heir. So far, Kelson has been unlucky in love. His first wife was killed on their wedding day and his second fiancée, a woman he still loves, was stolen from him. With Liam coming to power in a vassal state that Kelson isn’t sure he can trust, lonely Kelson realizes that he must give up on the idea of marrying for love and must simply choose an acceptable woman who will give him the greatest political advantage.

In many ways, King Kelson’s Bride is a romance novel. By the end, there are several happy couples, though I’m not going to tell you whether Kelson ends up happy or not. But it’s not all romance. The storyline involving the treachery against Liam is the major part of the plot and it’s mostly an exciting story. I say “mostly” because, as usual, there is too much pomp, ceremony, and ritual in King Kelson’s Bride.
One of the things Kurtz does best is to depict a medieval feudal lifestyle. I find it interesting that most modern readers abhor what feudalism stands for — the patriarchy, classism, sexism, and servitude — but for some reason we enjoy immersing ourselves in these worlds when we read epic fantasy. We find these stories of chivalrous lords who bravely fight evil, acquire titles and lands, and court beautiful ladies to be romantic. I suppose we’re all imaging what it would be like to be one of those well-dressed and pampered lords or ladies, NOT one of their servants.

Several other loose ends are wrapped up in King Kelson’s Bride. I won’t tell you how they turn out either, but I will say that Kurtz deals with the conflict between the Church and the Deryni, the Mearan rebellion, the cult of Saint Camber, Nigel and his neglected grandchildren, and Kelson’s mother, who has not been able to come to terms with her own Deryni powers. I think many readers will find it all to be wrapped up a little too neatly and will think that King Kelson’s Bride feels “tacked on,” which it kind of is. But many others will be pleased that most of the characters get a happy ending. Some readers may even cry.

I’m sad that Kelson’s story appears to be finished. I wish there was more and hope there will be some day. The audio versions produced by Audible Studios and narrated by Nick Sullivan are excellent.

Almost as good as the book!

Would you listen to King Kelson's Bride again? Why?

Definitely! It's an easy way to immerse yourself into the land of Gwynedd.

What was one of the most memorable moments of King Kelson's Bride?

The entire story line is fantastic. I think the best part of the entire story is not Kelson and his bride but the ceremony to in Torenth to really put Liam on the throne. The magic and politics involved in that scene are just out of this world.

What does Nick Sullivan bring to the story that you wouldn’t experience if you just read the book?

He does attempt to give different "voices" for the different characters which is not easy for him with the female voices.

The one detriment to an audio book is that the pronunciation of the character names, especially when they are not common names, may not be the same as you have always thought of them as you read.

For example, I have always thought of Meraude (Kelson's Aunt) as "mer-awd" where it is pronounced in the audio book as "mer-od" (long "o"). It may be technically correct but with a fiction book, I still think of her the way I have always done before and that pronunciation just catches at my ear!