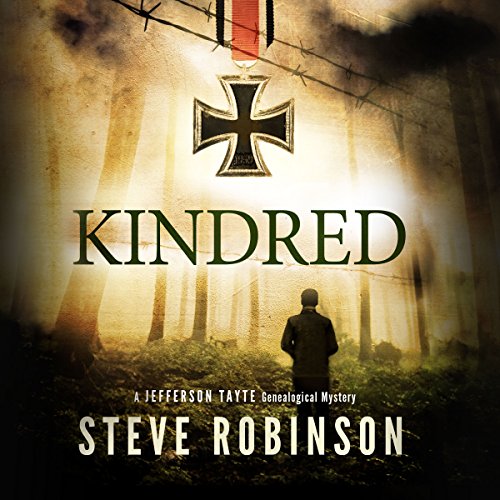 Jefferson Tayte is good at finding people who don't want to be found. For years he has followed faint genealogical trails to reunite families - and uncover long-hidden secrets. But Tayte is a loner, a man with no ties of his own; his true identity is the most elusive case of his career.

But that could all be about to change. Now Tayte has in his possession the beginnings of a new trail - clues his late mentor had started to gather - that might at last lead to his own family. With Professor Jean Summer, his partner in genealogical sleuthing, he travels to Munich to pick up the scent. But the hunt takes them deep into dangerous territory: the sinister secrets of World War II Germany, and those who must keep them buried at any cost.

When their investigations threaten to undermine a fascist organisation, Tayte and Summer know time is running out. Can they find their way to the dark heart of a deadly history before they become its latest victims?

Just like the others in the series this is first class listening. I loved JT and his search for his parents...wonderful story telling! Would make a great mini series on tv...don't miss these lovely books!

Had reservations about purchasing this book but was pleasantly surprised! The story was great & loved the switching between 1945 & present day. This book was not at all what I expected (although it is the first book I've bought of this author) and will definitely be trying another.

A good book if you've enjoyed the others

A brilliant descriptive story of WW2 in Nazi Germany! The links to JT's past and present are an amazing, interwoven puzzle. Simon Vance is a wonderful narrator and very gifted at doing the character voices. Easy to follow 'who's who'.

another good story in the series where JT gets himself into more trouble. excellent narration by Simon Vance as always. lots of action to keep you interested.

cannot wait for the next book

I don’t have anything to bad to write abut this book. It was easy reading that immersed you in its crackers and the journey they all took. Brilliant plot. Off to start Book 7. I read book 6 first but it hasn’t spoilt the rest of this series. You can undertake them as individual books.

This book is very good, lots of twists and turns. Keeps your interest all the time.

The narrator really brought the characters to life. I could see them quite clearly as I listened. The story was intriguing and I wanted to keep on listening to the next chapter. I had worked out the twist by chapter 30 but it didn't stop me wanting to continue listening. I really enjoyed this book.

I enjoyed this boo k though I did find it a little heavy in places.

Steve Robinson has taken his subject to a literary best. His story telling hits the mark. He has taken Jefferson Tate to a timely and relevant place. The social impact of dealing with Germany world war II and the descendents of war. He never evades the monstrosity of that war and weaves a challenging mystery that keeps you on your toes and guessing. When the mystery incl u does modern crimes it holds you. This book has historical thought provoking impact.

Same opinion as before

I feel the same way about Book 5 as I did for Books 3 and 4. In this instalment, I particularly enjoyed the setting in Munich because it evoked some nice vacations memories.

Overall:
•I liked the story, but there were times when I was quite mixed-up because I am bad at remembering names and on numerous occasions, I was confused about who was who.

•A little heavy on action scenes which it my opinion are better when seen - not read or heard.

•I hate it when the bad-guys blab out their evil schemes.

•Does the author have a contract with Mr Goodbar? The product placement felt extremely contrived.

Love all these books

In love all the Jefferson Tayte books but this was the best so far. Wonderful story line, kept on the edge of your seat for what would happen next. Can't wait for the next book. Please keep them coming.

Simon Vance is the best at reading these stories and makes them all come to life. Thanks

i enjoyed the story and narration very much, pace of book was good as well

I have loved every book in this series. Each one is different , and I can't wait to keep reading!

After 4 novels where Jefferson does genealogical research for others, he finally gets to his story. Like the other stories this one is riveting! Can't wait for the next installment! Particularly given how this one ends! Simon Vance is the perfect narrator for the story.

Superb read and suspenseful to the end. Not being up on the history so cannot say how much is fact and how much is fiction I still found it extremely believable either way! A great twist at the end I did not expect. Looking forward to the next Jefferson Tate mystery. Get writing, Mr. Robinson!

if this had been a physical book I'd say I couldn't put it down .

This was great story with many twists and turns. The narration was outstanding! Probably the best I have heard. I'd certainly recommend it!

The story line was very, very interesting and easy to follow. Lots of turns and twists that were surprising and really added so much to the book. The narrator was very good. Sometimes when people try to do a foreign accent it is hard to understand, but Simon Vance did a good job.