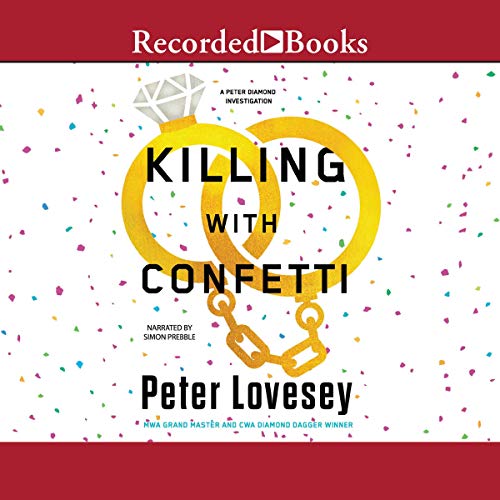 By: Peter Lovesey
Narrated by: Simon Prebble
Try for £0.00

Peter Diamond is tasked to run security for a wedding. Seems a bit beneath his extraordinary detective talents, as well as his title as head of Bath's CID, but this isn't your run-of-the-mill ceremony: the bride and groom belong to families on opposite ends of the law - and someone is trying to sabotage the nuptials by taking out a hit on the father of the bride.

As a New Year begins in Bath, Ben Brace proposes to his long-term girlfriend, Caroline, the daughter of notorious crime baron, Joe Irving, who is coming to the end of a prison sentence. The problem is that Ben's father, George, is the Deputy Chief Constable. A more uncomfortable set of in-laws would be hard to imagine. But mothers and sons are a formidable force: a wedding in the Abbey and reception in the Roman Baths are arranged before the career-obsessed DCC can step in.

Peter Diamond, Bath's head of CID, is appalled to be put in charge of security on the day. Ordered to be discreet, he packs a gun and a guest list in his best suit and must somehow cope with potential killers, gang rivals, warring parents, bossy photographers and straying bridesmaids. The laid-back Joe Irving seems oblivious to the danger he is in from rival gang leaders while Brace can't wait for the day to end. Will the photo session be a literal shoot? Will Joe Irving's speech as father of the bride be his last words? Can Diamond pull off a miracle, avert a tragedy and send the happy couple on their honeymoon?

What listeners say about Killing with Confetti

This is an interesting case, in that it is not your typical police case, at least not for Peter Diamond. It will keep you guessing and there are many twists and turns. I thought that I had it figured out but I was wrong. I didn't see this one coming. And yet, the ending made perfect sense. This is an unusual ride; hope you enjoy it!

Lovesey & Prebble are a duo who never disappoint! Can't imagine any other voice for Diamond and the plot ending is always a surprise.

I envy the people new to this series.. You're in for a treat. Start now!

Another Diamond for Lovesey

I love Peter Lovesey’s Diamond series, Diamond is a great character and the setting in Bath is
Wonderful! I visited Bath before I started reading the series and “met” the author at a crime convention and have been hooked since. Can’t wait for the next one!!!!!💕🌴🌺

First of all, I love Simon Prebble, the narrator. Second, I loved Peter Lovesey's characters. This book was enjoyable and suspenseful.

Aha! I thought I had it. but alas. I was wrong. Very tricky with a classic reveal.

love the narrator. I usually listen to dark murder mysteries and wanted something a little lighter. this was very enjoyable. will listen to more in the series.

an interesting story in the series

the author once again writes an interesting story tying up all the loose ends it's a little shorter than a lot of his books but that's not always a bad thing. it's more of a traditional kind of tribute to the old detective story bringing everybody all the suspects in at the end and taking them through the process. it's worth a read and worth a lesson again the difficulty with the performance for his books is there's just so many characters and the person doing the performance has to have so many different voices and it's just really hard for an individual to do that.

We have an unusual story line here. It led me all over the landscape and
kept me interested- even as I sometimes wondered if I would be smarter to go off to start another book. Glad I stuck with it. By the end the author had me cheering.