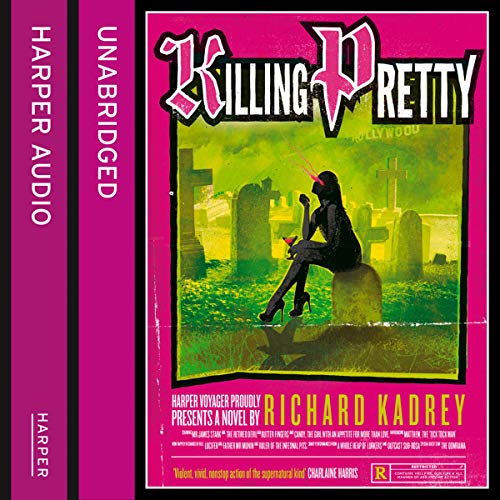 By: Richard Kadrey
Narrated by: MacLeod Andrews
Try for £0.00

A smart, kick-arse urban fantasy from a new master of the genre. Killing Pretty is the seventh book in the fantastic Sandman Slim series.

James Stark has met his share of demons and angels, on Earth and beyond. Now he's come face to face with the one entity few care to meet: Death.

Someone has tried to kill Death - ripping the heart right out of him - or rather the body he's inhabiting. Death needs Sandman Slim's help: he believes anyone who can beat Lucifer and the old gods at their own game is the only one who can solve his murder.

Along the way he meets a mysterious girl - distinguished by a pair of graveyard eyes - as badass as Slim: she happens to be the only person who ever outwitted Death. But escaping her demise has had dire consequences for the rest of the world...and a few others.

For years Slim has been fighting cosmic forces bent on destroying heaven, hell, and Earth. This time the battle is right here on the gritty streets of the City of Angels, where a very clever, very ballsy killer lies in wait.

"The best B movie I've read in at least 20 years. An addictively satisfying, deeply amusing, dirty-ass masterpiece, Sandman Slim swerves hell-bent through our culture's impacted gridlock of genres.... It's like watching Sergio Leone and Clive Barker co-direct from a script by Jim Thompson and S. Clay Wilson." (William Gibson)

"If Simon R. Green wrote an episode of Dog the Bounty Hunter, it would read much like Sandman Slim - violent, vivid, non-stop action of the supernatural kind. I couldn't put it down." (Charlaine Harris)

What listeners say about Killing Pretty

This is the first book in the series I've listened to. I have read all of the previous books so you have an image of what you think they will sound like etc.
It's not the best in the series but it's still a good story and it leads on well from the other books. The series is great it is definitely worth a listen.

One of my favorite series. So good I read it again. The narration is excellent. Can't wait for the next one.

So glad Stark is still going after the events of The Getaway God. His life has changed but he's still just as hard as ever!

Not the best sandman slim

massive fan of sandman slim this one was good but likely not as good as the rest.