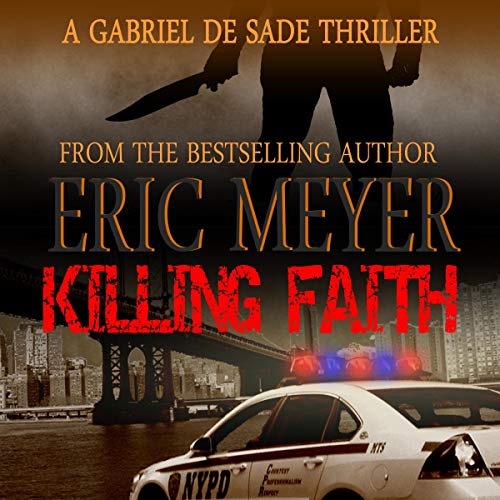 Killing Faith is the first book of the 'Faith' series of novels about an NYPD detective and former Special Forces operative. Teamed with FBI Special Agent Faith Ward, their methods are always unconventional, often brutal, at times mystical.

When dismembered bodies start to appear in New York City, the search for a serial killer begins. Leading the hunt is Gabriel de Sade, a tough Manhattan detective. What should be a straightforward murder investigation escalates when yet more dismembered bodies are found. A very sick, psychotic murderer is loose on the streets of the city. Yet the case is to become more complicated than he could imagine. The nightmare is just beginning for de Sade, a Delta Force veteran of Afghanistan.

The FBI are also hunting for the serial killer and their evidence points to a Russian Mafiya baron, Grigory Gordieva. The pursuit leads Gabriel to Moscow with an FBI partner, Special Agent Faith Ward. They find themselves pitted against political interference from both American and Russian governments. Yet when they ask for help from the Moscow Militia de Sade finds them both corrupt and on the Mafiya payroll.

Their only assistance comes from an unexpected quarter, a Russian Orthodox Bishop. With his help, de Sade reaches the heart of the Gordieva's Mafiya operations. The Russian retaliates by kidnapping Faith Ward. With only a discredited Militia detective to help him, he takes on the Moscow Mafiya. De Sade adapts his Delta Force tactics to wage a secret war on the Moscow streets. The action builds to a climax that is shattering and extraordinary.

Killing Faith was full of action and suspense. Eric did a great job with the characters and the interaction between them. The love story that comes along with the mystery is awesome too. Rich had a great voice and did an amazing job.

Eric Meyer created a gripping book in Killing Faith. I was immediately pulled into the story by the incredible narration by Rich Callahan. He gave distinguishable voices for the various characters, and added to the suspense. Some of the twists took me by surprise, which I really enjoyed. I requested this review copy audiobook and have voluntarily written this review. I will definitely listen to more books by this author and narrator in the future.