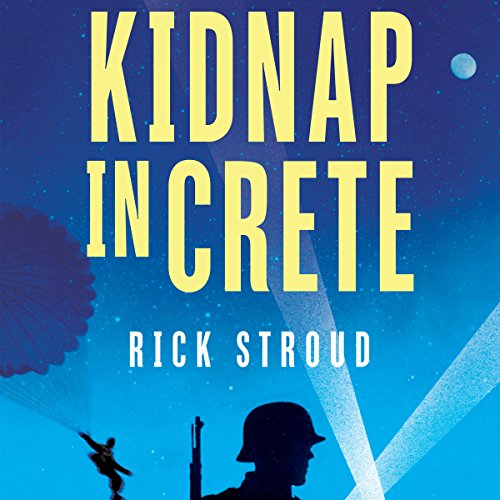 The True Story of the Abduction of a Nazi General
By: Rick Stroud
Narrated by: Michael Maloney
Length: 8 hrs and 18 mins
Categories: History, 20th Century
4.5 out of 5 stars 4.3 (30 ratings)

This is the story of how a small SOE unit led by Patrick Leigh Fermor kidnapped a German general on the Nazi-occupied island of Crete in 1944.

For 32 days, they were chased across the mountains as they headed for the coast and a rendezvous with a Royal Navy launch waiting to spirit the general to Cairo. Rick Stroud, whose Phantom Army of Alamein won plaudits for its meticulous research and its lightness of touch in the telling, brings these same gifts to bear in this new project. From the adrenaline rush of the kidnapping to the help provided by the Cretan partisans and people, he explains the overall context of Crete's role in World War II and reveals the devastating consequences of this mission for them all. There have been other accounts, but Kidnap in Crete is the first book to draw on all the sources, notably those in Crete as well as SOE files and the accounts, letters, and private papers of its operatives in London and Edinburgh.

what an extraordinary story. the narrator is excellent and there is never a dull moment.

great story of plucky derring do in ww2.

excellent narration. already knew story but audio really brought it to life. reckless stunt or real blow to nazi morale? sadly given the brutal german reprisals i would say it wasnt worth it.

A little known story from WWII told very well and narrated with expertise. The story is thrilling and showcases how a resistance movement builds and executes the kidnapping of a German General. Well researched, very well written and excellent narration by Michael Maloney who handled tough pronunciations with relative ease.

This is a true story of Crete during the Nazi occupation, a real Boys’ Own adventure with larger-than-life characters and an impossibly daring kidnap plot. It had me on the edge of my seat more than once. The setting is stark – the harsh Nazi occupation which saw the Cretan population dealing with shortages of food and supplies, death of loved ones fighting or spying for the Resistance, and brutal disproportionate reprisals for each Resistance success. Credit for the plot and its execution goes to a handful of British officers, their team of determined guerrilla fighters (andartes) who formed the kidnap team, and the many Cretans who hid, fed, and helped them along the way and kept the operation secret for the many weeks that it took. Despite the numerous heroes in the story, whether the kidnap plot itself was ultimately heroic or simply foolhardy remains a matter for debate. Aside from the element of adventure and excitement, this story stands as a testament to the Cretan Resistance – a story which may make many question what they would do if their country were taken over by a cruel occupying army. Rick Stroud took a plot, a cast, and an occupation, and put them together in a gripping tale. Michael Maloney’s narration cannot be faulted, he captures the mood so well it’s almost like being there during the most action-packed and dangerous episodes – a wonderful performance. Have a look at a map of Crete before you start, or have one handy - it helps to see where everything happened and how far the kidnap group travelled.