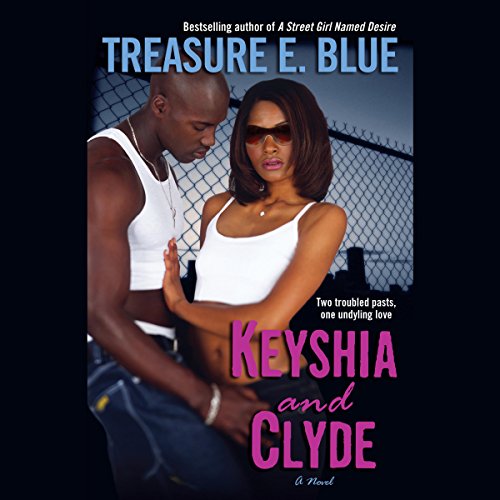 By: Treasure E. Blue
Narrated by: Mirron Willis
Try for £0.00

Knocked up by a Southern preacher, Keyshia is sent to live with her aunt in New York, but after a horrific act of violence, the timid young woman becomes ice-cold - turning tricks and finding comfort in a crack vial.

Clyde and his two brothers find themselves living with a family friend after their mother is shot by their own father - leaving her institutionalized and unable to communicate, and him behind bars. Clyde's older brother leads a decent life, working as a bank manager and trying to keep Clyde off the streets, but Clyde's younger bro is the coldest killer in Harlem and takes every opportunity to involve Clyde in his infamous robberies turned blood baths.

When Keyshia and Clyde meet, they are instantly drawn to each other. Forced to pay back a large sum of cash to one nasty Harlem kingpin or risk the lethal consequences, Keyshia and Clyde use their tight game and their loyalty to pull off the impossible. And when Clyde is falsely accused of a bank hit, Keyshia vows to stick by her man - no matter the cost.

"Treasure Blue continues and solidifies his position as the true heir to Iceberg Slim and Donald Goines. A book full of gritty realism, violence, drug abuse, and hope; the book is simply off the damn hook!" (African American Literary Book Club)

What listeners say about Keyshia and Clyde

WOW, A Must Listen, Really

This was by far one of the best books I have ever listened to. The narrator did an excellent job and the story was well written and flowed nicely all the way through. You must take this journey with Keyshia and Clyde!

The Power Of Love

As I type this review, I can hear Luther Vandross singing in his low and silky voice "thats the power of love a song that I was never all that fond of. My teenage daughter was helping me browse titles since I had two credits burning a hole in my cyber pocket. She saw this title and squealed with delight, Mom, get this one! You'll like it, I promise!" She said the same thing about The Coldest Winter Ever, so I told her my paswwrd and had her xpress pay. I streamed it, not wanting to wait for the download and was captivated. The love story was so poignant that it brought tears to my eyes at several parts of the book. If you cry when love and justice pprevail, read this book. If you root for those who can overcome insurmountable obstacles, read this book. If you still believe that a mothers love is one of the best gifts in the world, read this book.

FINISHED IT IN ONE DAY!!

THIS BOOK WAS EXCELLENT! I FINISHED IT THE DAY I STARTED. I LISTENED AT WORK, IN MY CAR, AND WHEN I GOT HOME FROM WORK.

THIS WAS MY 2ND AUDIO BOOK AND DEFINITELY WORTH IT. GREAT LOVE STORY. I REALLY APPRECIATED THE FACT THAT THEY INCORPORATED THE STORY OF FAITH. MORE THAN WHAT I EXPECTED.

Great book!!! I loved the loyalty, honesty and justice that was portrayed in this book.

Excellent Narration..This is a great book. Keyshia was a true ride or die chick in this book. This book just goes to show you no matter where you come from you can rise above your situation. I think you will love this book from beginning to end...YOUR MIND IS YOUR 9!!!

This was my first Audible book, and the first book I have ever listened to on my mp3 player. I guess the angels were in my corner, because this book was AWESOME. The narration was excellent! My intention was to listen to the book while I did my morning walks, but it got so good, that I would listen, at home, at work....everywhere. Lots of suspense and I hated to see this story end!

Stayed up all night listening to this book, lots of laughs...... this book reminds me of "Thugs and the women who love them" but in a different light.

In a word WOW

I did not think I would enjoy this book as much as I did. This was an excellent story that did not fall into the melodramatic, surprising good story with a great end.

Great book, couldnt wait to get to work and put on my headphones at 6 in the morning...Love this book

There are certain books who's characters you will think about long after...this is one of those books. It gives a first hand view of what real hardships birth in people and did not leave 1 stone unturned like many books. A person like myself would never know life gets this hard unless its read or watched. Narrator was excellent!!!!! would like to see a little pause between sceenes however because I would get lost in transitions. I want to say so much more but would give away to much info. So I'll just say....its a must listen.