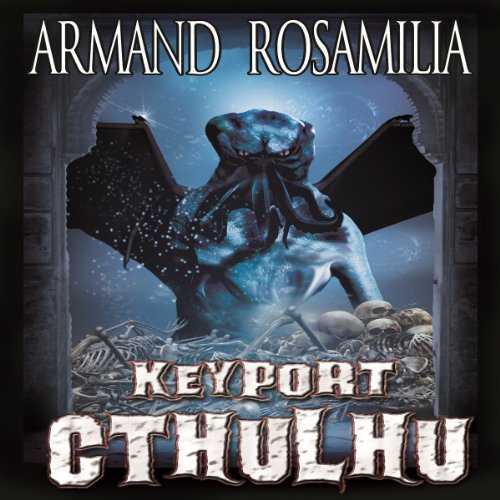 By: Armand Rosamilia,Katelynn Rosamilia
Narrated by: Mike Chadwick
Try for £0.00

"The painting forced him to move back with such suddenness, he nearly fell over the side of the old wooden railing. It depicted a grizzly scene, as if your worst nightmare had been splattered on canvas. Despite his mind screaming to look away, he could not avert his eyes".

Five stories with a Lovecraftian feel to them…set in the New Jersey fishing village of Keyport, where the Esoteric Order of Dagon has been planning for the awakening of the Deep One all these years... ANCIENT BARREN CABAL DAGON EVIL Includes two bonus stories, the steampunk tale "Rats In The Cellars" and "Cthulhunicorn" co-written with Katelynn Rosamilia.

What listeners say about Keyport Cthulhu

Did you say your last name was Marsh?

I enjoyed this Lovecratian tale set in the town of Keyport, NJ. There's easter eggs through out for the HPL fans. I listened to the audio book. It's narrated by Mike Chadwick. He does a good job. I enjoyed listening to him bring this weird tale to life.
I requested this audio book in exchange for a honest review.

There are three stories to this book which I didn’t realize until the end of the second story. All of them were good. The narrator was was very clear and consistent throughout the reading and in the other stories changed his tone to match with what the story needed. I didn’t like his re-recorded lines in the book. They were very sudden and took you right out of the story. The narrator would say the bit of dialogue and then it felt like someone new would do the re-record then the narrator would continue. A bit strange, didn’t ruin the listen, but made you pause. Despite that minor nit-pick I liked listening to this book.

What did you love best about Keyport Cthulhu?

I feel that the book was well written. The characters drove the story.the surroundings were very vivid and the twists were well placed.

Have you listened to any of Mike Chadwick’s other performances before? How does this one compare?

No , but he did a great job with this story.

I was happy when Nichole was taken. She was annoying.

Keyport Cthulhu is a dark and suspenseful story. Harry inherited an old house in a small fishing town on the New Jersey coast. He was hoping his wife Nichole would fall in love with the house and the quaint little town. The house was hiding the dark secrets of the town of Keyport and the people who were born there. Their first night there Nichole was taken in the night to be the sacrifice lead to the sea by Harry’s dead grandfather who was laid to rest in a room upstairs. This is where the story begins. In the course of Harry trying to find his wife he meets Father Rocko,who is able to shed some light on the unfriendly town folks.Some families had moved away when their children were young, yet sooner or later those who were born in this town find themselves pulled back to this fishing town without knowing why. There are several really interesting characters in this story, a few of my favorites are Harry, Father Rocko and Bobby "Bones”. The idea of a painting found in the upstairs hall that can suck people into it and deposit them into the depths of darkness was brilliant. The pace of the story was steady never lacking in the action department and the monstrous creatures Armand Rosamilian describes are frightening. He is a wonderful storyteller. Pick up this book to find out more.
I also liked the bonus stories at the end of the book, they were cute.

great story abou a little town with a evil secret

This was a great story a little town with the Evil with in they had new comers if you were not born here your not welcome. Once Harrison come back town to get his dead grandpas house and sale it, He got a bad feeling of the house its self.all but anything good happen it was his worst fears the town people were against him and wanted his wife as a sacrifice he woke up with the sound of his wife screaming and watching his grandpa his dead grandpa row off with his wife in the lake....... its a must read for any one Armand really knows how to write how to tell the story's and how to get your imagination working

Appallingly bad - do not buy it.

When I first heard the narrator mispronounce Cthulhu I thought it was a joke, it wasn't. This book has a few interesting characters but seems unable to follow them to any kind of conclusion. No fewer than three plot lines were started; only to be abandoned so abruptly that I thought there was a fault in the book, there wasn't. It is rare to find a book this short that fails on so many levels. The authors should be ashamed and the narrator should stick to subjects he knows better.