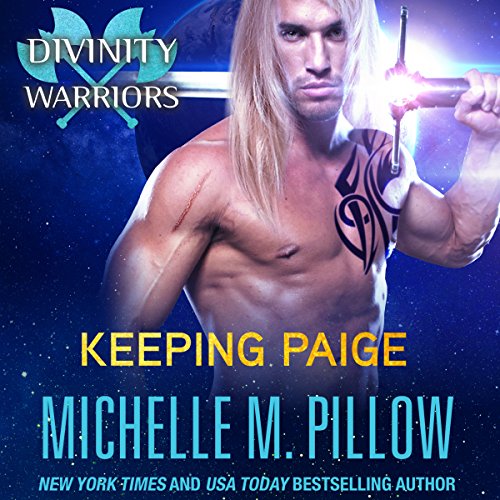 An outcast because of her psychic abilities, Paige doesn't expect her people to rescue her when a zealous sect of Faerians sacrifices her to their gods. Thrown through a fairy ring to a new dimensional plane, drugged on ambrosia, she is compelled to seduce the first man she meets. Only when the effects wear off and she's left with an insatiable husband expecting more than she's willing to give, does Paige discover the true extent of what the fairies have done.

Ordered by the king to marry, Sir Aidan of Fallenrock is dead set against taking a bartered bride. He believes his people should be patient and wait for the gods to bless them. When the beautiful Lady Paige comes through the sacred rings, kissing and touching him like she knows their joined fate, Aidan's sure he's being rewarded - until his new bride tries to back out of their marriage.

What listeners say about Keeping Paige

i must admit i wasn't looking forward to this book, because i didn't like the image that was painted of paige in th other books. i thought her selfish and too stuck up. but as i heard the story, i got a better and better picture of her. in the end i was actually rooting for her. so i would say, if it could get me to like her, it was well written. because i very seldom change my mind, ones it's made up.

Keeping Paige is the story of a woman that is drugged and unwillingly thrust through a fairyring. Her adventure is just beginning after being thrown through the fairyring. The oracles have claimed that Sir Aidan must take a wife. He is waiting for the gods to give him one that he has earned. Aidan comes across the drugged Paige and they are quickly claimed, mated and sated. Paige spends the rest of the book caught between hot sex, lots of it, and trying to discover more about her new home and deciding if she wants to stay.

At one point she runs away and encounters the very evil creatures that Aidian’s people are fighting. Aidan manages to save her but leaves her in the hands of Edward. Edward is tasked with making sure that Paige made it back to the castle. I couldn’t stand Edward and wanted to slug him. I almost hated Aidan for leaving her with Edward. Once back at the castle, Aidan must make the decision to public reclaim Paige as his wife.

You can just feel the desire that Paige and Aidan have for each other. The tension and drama in this book was not missed, even through all of the sex. Rebecca Cook did an excellent job in bringing Paige and Aidan to life along with emoting their feelings. This is the third book in the Divinity Warriors, but is a standalone read.

I love this series. This book book was great Its about a woman who gets kidnapped in her world and tossed into a fairy circle and ends up in the arms of a hot warrior. Sparks fly lol. Its s mix of trouble, miss understanding and hotness that will not denied! The ending is just beautiful. Its a must have!

What does Rebecca Cook bring to the story that you wouldn’t experience if you just read the book?

I love how Rebecca cook reads this story its great

The end ing its sooooo beautiful

Where does Keeping Paige rank among all the audiobooks you’ve listened to so far?

Michelle M Pillow is an inventive story teller. This is the third book in the Divinity Warriors series I have listened to. This one was surprisingly unique. In these delightful books there is a world of warriors in desperate need of wives. They make an agreement to receive women from another world for the special blue water. However, how the women are selected for Divinity is anything but reputable and how they adjust to their new circumstances is an adventure. Keeping Paige in an inside out whirlwind of tantalizing, edge of your seat triumph of human emotion and love.

Rebecca Cook gives an excitant performance with the Divinity Warrior series however her accent for Paige in this one seems contrived and unnecessary. It kind of got in my way as a listener. She doesn't do that in the other books.

I broke this book up into listening times but could have listened in one sitting.

quickly becoming a favorite of mine

Quickly becoming a favorite of mine, the Divinity Warriors series delivers another winning installment in book 3: Keeping Paige. While we have previously met Paige and Aidan in the earlier books, this also works as a standalone story: what is important is that Paige’s story starts before the women are in the cell awaiting the breeding ceremony at Battlewar Castle.

Aidan is a highlight in this story: he has a wonderfully soft and gooey center as evidenced by allowing his best friend’s daughter to braid, knot and otherwise ‘pretty up’ his hair, finding true joy and comfort in the little girl’s adoration. He is wishing to follow in his friend’s path: married to a woman who came through the faerie ring and now with one child and another on the way. Not at all interested in the summons and King’s demand that he attend the breeding ceremony at Battlewar, he expects it to again leave him mateless.

Paige is a Forrester, a dimension that brings thoughts of Snow White’s cottage in the woods with the seven dwarves. Paige is blessed, or cursed, with foresight: making her an outcast in her own land. When she is captured by the Faerians to be sacrificed for their beliefs, and left, drugged in the faerie ring. Here she believes that Aidan is a Fairy come to rescue her: the drugs make her insatiable and her first experience is one that she can’t wholly remember.

Together there is an interesting push and pull between them. Although Paige is uncomfortable with all of the changes and doesn’t always understand them, she sees him as her only salvation. Aidan is afraid that his claiming of Paige in the way he did angered his gods and has set him back on the path to being alone forever. While it is apparent to everyone that the two are meant for one another, the path to true love is never without pitfalls.

Rebecca Cook manages again to imbue each character with their own particular flavor and patois as their words are delivered. This adds a depth and impact to the emotional components, and her pacing variations manage to move the story forward smoothly and without distractions. While there are dimensional jumps, the lands that are explored here are more medieval in feel, lacking in the technology more apparent in the first two books. I really am enjoying this series of stories, if you want some fantasy with true alpha males, clever females and plenty of steamy moments to make you squirm: this is the series!

I received an AudioBook copy from the author for purpose of honest review. I was not compensated for this review: all conclusions are my own responsibility.

I really liked Paige and Aidens story. They had a connection from the start even with a bit of fairy juice to get the juices flowing. Financing a strong female is harder than Aiden thought but the reward is everything.

Even sad beginings can have happy endings

I would highly recommend this book, the whole series in fact. I like the concept of inter-dimensional travel being natural as well as technological.

What was one of the most memorable moments of Keeping Paige?

can't say as it is a bit of a spoiler, however it is at the end in the alcove behind the stable when Paige is trying to get out of going to the fire ceremony.

Have you listened to any of Rebecca Cook’s other performances before? How does this one compare?

I have listened to two other books narrated by Rebecca Cook and all have been excellent.

There is wide range of emotion pulled from this book, at times you'll laugh and others cry; occasionally you'll even want to hit someone

Are fairies good or bad? Paige is leaning toward the later as she is drugged and thrown through a fairy ring landing in the dimension of Staria. Sir Aiden prays for the gods to bless him with a wife from the fairy rings and finds Paige. Between Aiden’s bliss at having his prayers answered and Paige in a drug induced sexual spell they steam up the forest then his bed and several places in-between. Of course the drugs wear off leaving Paige lost, confused, and not as receptive to Aiden as she was which leaves Aiden frustrated and confused as well; mainly due to the fact that he has developed feelings for Paige that he does not understand (Starian men don’t believe in love after centuries of war, only duty and honor). Add in Aiden’s harpy of a mother and the fact that everything is so different than what she has always known Paige runs away. Aiden saves her just in time but then leaves her with his friend (Edward) to be taken to the King’s castle for a “proper” claiming. Edward is very gruff and fills Paige’s head with fears that Aiden will not claim her a second time and she will be claimed by someone the likes of Edward or worse. It’s a great story with some humor, a wide range of emotions, and characters that are easy to love, or in some cases hate.

Rebecca Cook has an enchanting voice and uses tone and pitch to really differentiate the different characters, truly a joy to listen to.

I think this would be my fave story in the series. I love Aidan, the way he deals with Paige, with patience, acceptance and ardent love. I adore Paige, she is a strong woman, knows her own mind and is not afraid to speak up, deals with everything thrown her way, she is funny at times. I am so happy that they came to form a solid relationship that she has foreseen to last well into their old age.
I great choice in narrators, I LOVE Rebecca Cook's voice, so versatile, full of emotion and passion. Thank you for the hours of pure enjoyment.