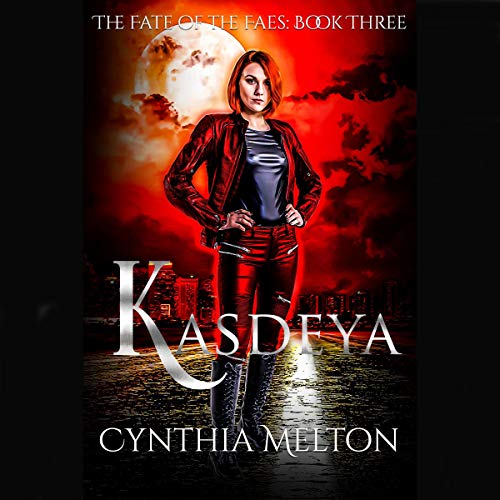 By: Cynthia Melton
Narrated by: Amy Deuchler
Try for £0.00

From leader of evil, to outcast, to wanting revenge, Kasdeya joins forces with the faeries in hopes of witnessing, firsthand, the destruction of Abaddon. She’d forgotten what it felt like to be human, with a heart that could be broken.

Now, she would fight alongside the very people she’d once tried to extinguish and find that being human came with its own treasures. Namely in the form of Detective Luke Marshal, who saw through the darkness in Kasdeya and pulled her into the Light.

The final battle has come. While the outcome will be in favor of the Light; many will perish, and it is up to Kasdeya, Shayna, and Deema to make sure as few lives are lost as possible.

In this final book in the trilogy of The Fate of the Faes, a group of brave warriors must stare evil in the face. No one will walk away unscathed.

Can Kasdeya’s heart remain true or will she return to the power of the dark? The fate of two worlds rests in her hands.

What listeners say about Kasdeya

The finale battle is here

Wow, I have enjoyed every moment of this series and book three is no exception. I would recommend you start with book one and work your way through the series because otherwise you miss out on so much of the history and adventure. It is one of those moments where you want to get to the end to see what happens and who makes it to the end but at the same time you don't want the series to end. I really liked the characters, even the bad guys that defect grow on you in the end. Even though it is the last In the series the author has left it with the possibility of a spin off series, fingers crossed this is not the last we have seen of these characters. There is plenty of action/ battles and with each swing of the sword you get drawn into the story, the author does this by having different characters tell there side of the fight or the decision that lead to it. All in all a good series that you could listen to again.
The finale battle has arrived and sides have been chosen, now all is left is to see who will become victorious and who will perish. Marshal is the last remaining detective to have found a mate, he still believes Kasdeya is good and can be saved even if she doesn't believe it herself, can he convince the others that she deserves a second chance? And more than just as bait to bring out the demons. Abandoned and stripped of her power Kasdeya is once again human, does you have what it takes to stand by the warrior Queen and fight for the light and for the first man in a very long time who has made her feel human. With the demons and vampires growing in strength with the use of fae magic, the Queen turns to more humans in he form of mercenaries for help but is that a big mistake? Do men that fight for money really have what it takes to defend against the dark already in there hearts? The future has already been for told, all that remainss is to find out how many need to die for the rest to live.
I am so glad that Amy Deuchler was the narrator for all three of these books because she is such a talented narrator that I don't think anybody else would have been able to have done a better job at bringing the magic to life.
I was given this free review copy audiobook at my request and have voluntarily left this review.

This was a good listen. I really liked the overall story in this series and felt they all tied together well and made for an enjoyable listen. This one had the most action of the three (I thought) and really went by rather fast. I thought the narration was done well. All in all, I think this was a good series worth checking out.

I got this ARC via audiobook boom and this is my voluntary review. The main character seemed a bit immature for being as old as she is. I also felt she was not a tough as she should have been. The entire book was well written and I liked the multiple points of view. They were done seamlessly. I only listened to this book but was not lost because I missed the first two. The author did a great job of weaving in details that were probably told in their fullness in the previous books. Overall this was a good story and the narrator did it justice.

Final book of this series

I actually enjoyed this series. I went back and got book one after I read book of it. Although this is a series, I don't feel like you absolutely have to read the other two books to get the gist of this one. It will however give you a more enjoyable experience. This was a great listen. I feel that although the author has developed the characters quite well, the main character should have been a bit more, I do not know how to explain it. It doesn't matter. I enjoyed this book and will definitely look out for more from this author. I received a free copy of this audiobook at my request and have voluntarily left this review.

This is an awesome series! I have loved every minute of it!! My hope is one day the author, Cynthia Melton, will follow Kasdeya and Luke on new adventures.

Amy has done a marvelous job of keeping vocals separate although I can't decipher how she does it!! She infuses emotions so well that you get the emotion without a discernible trigger. Great job to all!!

While you can listen to this book as a stand-alone, it helps a little bit with some background if you read them in order 1-3. Vampire Kasdeya has been the leader of evil for so long she can't remember anything else, and she's tired of it. With the help of her nemesis Fae (Shayna & Deema) she decides to revamp (haha) her life when she finds herself falling for human Detective Luke Marshal. If you've read the other books, you already know that these books are a bit campy - whether intentional or not. This is a PG YA Fantasy Series with non-gory battles and light love story.

Once again, the narrator saves this book series for me. She's an expressive narrator and I have her on my "find other books she narrated" list.

I was given a copy of this book by the author, narrator, or publisher in exchange for an honest, unbiased review.

Good fantasy book. The multiple point of views allow you to get a fuller sense of the story and the plot is interesting. I received this book as a gift and am voluntarily reviewing it.

After three books I didn't want to see the characters go, but it was a journey I would take again. The book was a fitting end and was well done once again. The Narrator did a great job again and it was a pleasure to listen to. I was given a free copy of this audio in return for an unbiased review.