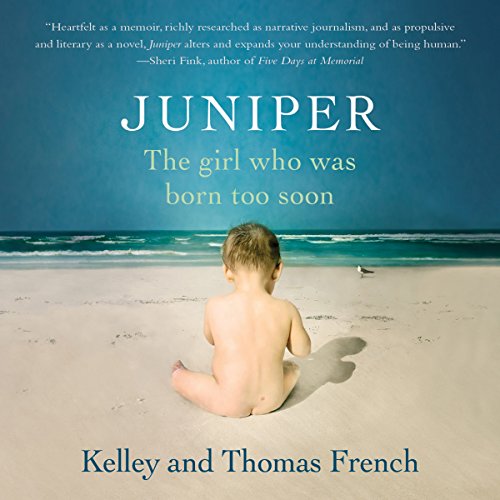 A micro-preemie fights for survival in this extraordinary and gorgeously told memoir by her parents, both award-winning journalists.

Juniper French was born four months early, at 23 weeks' gestation. She weighed one pound, four ounces, and her twiggy body was the length of a Barbie doll. Her head was smaller than a tennis ball, her skin was nearly translucent, and through her chest you could see her flickering heart. Babies like Juniper, born at the edge of viability, trigger the question: Which is the greater act of love - to save her or to let her go?

Kelley and Thomas French chose to fight for Juniper's life, and this is their incredible tale. In one exquisite memoir, the authors explore the border between what is possible and what is right. They marvel at the science that conceived and sustained their daughter and the love that made the difference. They probe the bond between a mother and a baby, between a husband and a wife. They trace the journey of their family from its fragile beginning to the miraculous survival of their now thriving daughter.

"Kelley and Thomas French are two of America's best narrative journalists, and here is their most important story yet. Juniper is an astonishingly intimate and honest account of a mother, a father, and a complicated baby whose very existence calls into question every easy assumption about what a life means. This is a deeply moving and meaningful book." (David Finkel, Pulitzer Prize-winning journalist and author of Thank You for Your Service)
"The Frenches put forth a love story about their daughter, with highs and lows throughout and moments of sheer joy that will keep readers involved until the very last page. This achingly tender memoir is also a roller-coaster...." ( Publishers Weekly)
"This is what happens when two great writers join together to tell something really worth telling. This book, of a life barely there, breaks your heart on one page, and makes you want to pump your fist in the air just a few paragraphs later. It is an achingly lovely book, all the lovelier because it is true." (Rick Bragg, Pulitzer Prize-winning journalist)

If you could sum up Juniper in three words, what would they be?

Honest - because although everything turned out OK for Juniper, the Frenchs make it clear that they doubted themselves at every turn.

Moving - in particular the relationships that the Frenchs formed with the hospital staff and their doctors, and their developing relationship with their daughter.

Uplifting - because it is a story about hope and involves a lot of clever people coming together to save a child.

What was one of the most memorable moments of Juniper?

I found it very moving when Thomas described reading Harry Potter to his tiny daughter.

What about Kelley French and Thomas French ’s performance did you like?

Both of them have very pleasant speaking voices and read the story in a way that hinted at how they felt at the time, without becoming melodramatic. They narrate as well as they write!

We all know people who don’t want to be parents. In contrast, Kelley and Tom French were willing to go to the ends of the earth to have a child. And you just know that they are going to be fantastic parents!
Finally getting pregnant, thanks to a donor egg, they were blessed with an impossibly premature baby girl, who they named Juniper. Against all odds, June Bug, as they called her, fought to survive and is now, years later, a typical, active kindergarten child.
The book tells the story of her struggles, and her parents dedication and emotional roller coaster. In the end, Juniper thrives and her parents discover a faith that they had taken for granted.
I enjoyed the effect of the authors reading the book themselves. In one chapter, I laughed and, in the next, I cried. I am sure that much of that emotion would have been lost if someone else did the reading.
This book should be required reading for anyone who feels that their children have pushed them to the limit, and thinks that they can’t go on. If the Frenches could keep going, then I guess the rest of us can make it, too. Extraordinary people! Thank you, Kelley and Tom and Juniper, for sharing your amazing story with the world.

the entertwining of so many aMAZing families.

just listen. mother or not [I am not, in the usual sense], you will find & feel love, facinating medical notwithstanding.

I listened to this over a weekend. I could't put it down. A truly inspirational book.

To any parent who's had a preemie!

This book is so relatable it was an amazing read or listen in my case. With a baby born at 32 weeks so many of the thoughts and feelings were relatable. Such a wonderful book. I even recommended it to another mom I know whose baby is still in the NICU.

As a mom whose son spent 60 days in the NICU, these parents gave voice to all I felt as a mom during that time. Bless them for such an incredible narrative that has helped me heal, and for the beautiful little miracle they have.

Must read for L&D / NICU providers (nurses, doctors and all of the great people that support families everyday).

Best Non-Fiction Story of the Year - A Must Read!

What made the experience of listening to Juniper the most enjoyable?

The narration by the authors, Kelly & Thomas French.

What other book might you compare Juniper to and why?

It's "a one of a kind" true story I will hold with me in my heart forever Nothing I've ever read comes close to this wondrous miracle of Juniper.

Too many to say.

Love does not conquer all, but in this memoir/biography IT DOES!

Everyone needs to read this book, LISTENING TO IT ON AUDIBLE IS SPECTACULAR!!