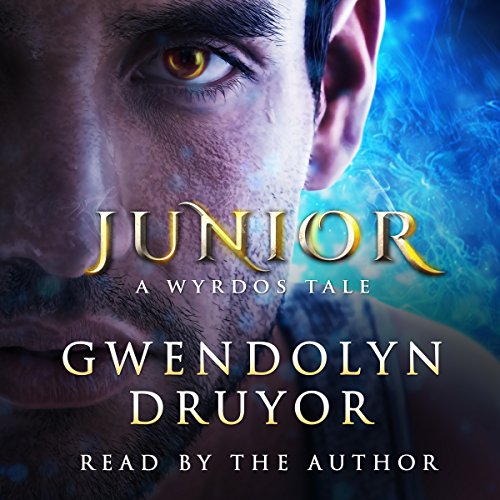 You can die of fright. Junior can't live without it.

Junior Leo just found out he's the boogeyman's bastard and his job is to terrify children.

Trick is, none of us ever really grow up. We're all children at heart.

It's the rare child that dreams of growing up to be a villain. Junior never did. But can you fight your genetic inheritance? Could he be a hero?

He's been hiding from the question for eight years but he's about to encounter an ancient artifact that's going to show everyone the truth about Junior Leo.

Junior is the third standalone in the Wyrdos Tales series. The Tales each feature a different supernatural character's involvement in the same apocalyptic event. You get to live it through different eyes each time.

What listeners say about Junior

Bumps in the night makes for a great story

I wow, I loved this trilogy. The author has weaved together three very different books, all about the same night and all just as fascinating as the last. This time it is the son of boogeyman turn and I really enjoyed how each character appears in each other's book and you think you know what happened but with each book there is a slight twist on the facts leading it in a different direction. Definitely a must listen to series and a fun twist on all your childhood monsters. A little boy has trapped the boogeyman but the boogeyman had somewhere really important to be. The boy will release him if he tells him a good story but is he ready for it? You see he hasn't caught the boogeyman he has caught his son. The son that doesn't exist and anybody can see, that is until he walks into a pub that will change his life forever. But can the son of the boogeyman really have new friends, a new family and new hopes or is he destined to be a monster like his old man. Gwendolyn not only writes the stories but she also brings them to life in all there colourful detail. I was given this free review copy audiobook at my request from audiobooksunleashed and have voluntarily left this review.

Junior is definitely one of the most creative and entertaining books I have ever read/listen to in a while. The whole series is amazing I am in awe of Gwendolyn Druyor and the way she develops her characters as well as her writing style. I highly recommend this book as well as the entire series. I received this book from Audiobooks Unleashed and this is my unbiased honest review.

I received this book for free for a honest review.  I loved the characters and storyline. this story was as I said simply amazing!!!! it flowed very well and held together.  The narrator did an excellent job of bringing the characters to life.  reccomend