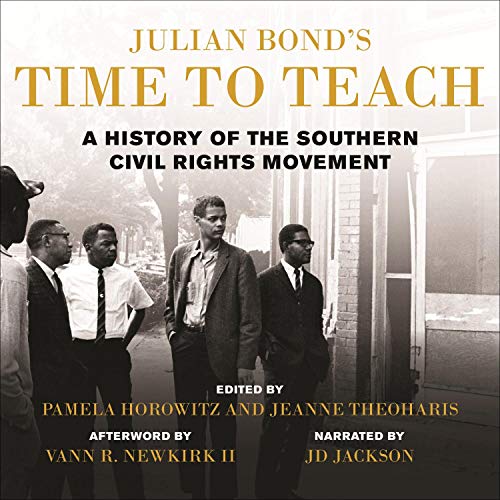 A masterclass in the civil rights movement from one of the legendary activists who led it.

Compiled from his original lecture notes, Julian Bond’s Time to Teach brings his invaluable teachings to a new generation of listeners and provides a necessary toolkit for today’s activists in the era of Black Lives Matter and #MeToo. Julian Bond sought to dismantle the perception of the civil rights movement as a peaceful and respectable protest that quickly garnered widespread support. Through his lectures, Bond detailed the ground-shaking disruption the movement caused, its immense unpopularity at the time, and the bravery of activists (some very young) who chose to disturb order to pursue justice.

“It’s easy to understand why these courses would have been popular. His lectures are accessible, comprehensive, and compelling, and Bond, who once hosted Saturday Night Live, and who appeared in a couple of commercial films, was a charismatic presence. This authoritative testimony is bound to become a staple of American civil rights literature.” (Booklist, starred review)

What listeners say about Julian Bond’s Time to Teach