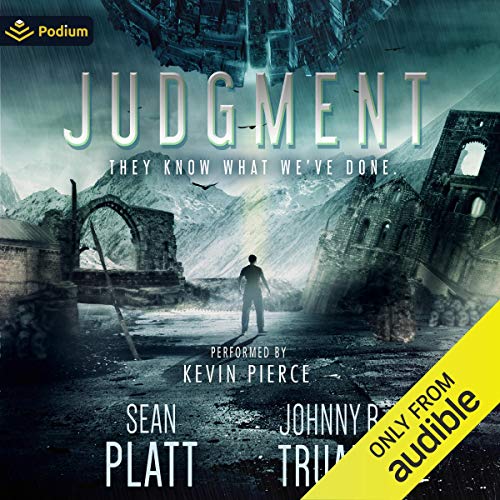 By: Sean Platt,Johnny B. Truant
Narrated by: Kevin Pierce
Try for £0.00

They know what we've done.

Cameron Bannister and his group of survivors have endured the fall of their great city and gone searching for what they once believed to be a weapon but found to be something else entirely. It's something that will decide the fate of all humanity - innocent or guilty - if Cameron can summon the will to start the doomsday clock ticking.

Accompanied by a strange wanderer with a hidden past, they must confront the judgment archive at its new location in the "capital of capitals": Ember Flats, on the former site of Giza, beyond the infamously unpassable wasteland known as Hell's Corridor. But when they arrive, all is not as it seems, and the viceroy, along with the secret society hiding within her government, is keeping secrets that keep the city calm - while unrest boils beneath its skin.

When a double-cross threatens the group's center, only a risky plan might save the species before judgment comes or bring the walls crashing down as the epoch ends in extinction.

This relentless, pause-resisting tale of colonization and alien empire is the fifth in the Alien Invasion series by masters of story Truant and Platt, authors of The Beam, Robot Proletariat, the Dream Engine series, and many more.

Fight for hope. Search for survival.

What listeners say about Judgment

I'm into the 6th book in the series

as I said above I meant to the sixth book in the series and to be honest they could all fit into a single book so far. it seems as though the author as going out of his way to turn it into a mini series in order to sell more copies. the series itself is entertaining but having to buy 6 books to get this far Takes the Cake

The story got lost somewhere.

This book was a meandering, meaningless lost journey. It appears that the writers forgot the storyline and needed to have the characters take a side trip. I couldn't figure out where the plot line was going before I got board and quit listening. The previous books were good. Don't know what happened on this one. Made me lose interest in the story.

Has Judgment turned you off from other books in this genre?

No, just this series.

If you could play editor, what scene or scenes would you have cut from Judgment?

Oh boy! Was this story ever drawn out. I had to listen to the same chapters over and over again because I kept falling asleep. But not from fatigue but from boredom. The narrator has a pleasant enough voice but I could not distinguish between the male and female voices. And don't even get me started on all the mind reading and higher spiritual power. I don't know if its about religion , science or gobbledy gook. The book goes on at nauseum about this higher level of consciousness. Every other chapter is a trip down memory lane recounting the most boring episode of the twilight zone.

I am beginning to wonder if he has 20% storyline and 80% character development dribble just so he can squeeze another book out. It is getting a little old listening to characters arguing with themselves the pros and cons of doing anything. A little of that can be understood but the level that he takes it becomes tedious and boring and makes you wish for the end of the book.

Has Judgment turned you off from other books in this genre?

Doing a pretty good job of turning me off to the authors.

Disappointment and anger that I feel I am getting ripped off. Turning a 2 books storyline into 6 or 7.

Really arguing with myself if I listen to the remaing books. Definitely not an outstanding series

Just trying to finish the book

i love the series but there are some dragged on and confusing chapters. I enjoy the suspense and diversion from the expected outcome.

This one lacks a true storyline

I loved her the first four books. This one was such a disappointment that I done care to finish. Sad for me

about as fun and enlightening as a deep rootcanal

too much back and forth arguing between characters and themselves, too slow, too much doubt.

Too much inner thought.

First of all I love their books. Mostly. This one starts nowhere and goes nowhere. Too much inner reflection and wordy descriptions. "Like a tiger would ravage a downed swordsman, the Reptar chewed his or, her...oh, who knows what aliens are, prey with sickening abandon...". It almost seemed as if someone completely different wrote this. I will continue the series but with a scepticism. Sorry, guys. I still love you but even if my sister rambled on so much, I'd have to shut her down.

I love these books! So much fun!

I love these books! Thank you for the fun twists and imagination!! It's really not hard to believe that this could actually happen one day. Hmmm....